Parents Just Do Understand: A Guide to Which Rappers Your Kids Can Listen To 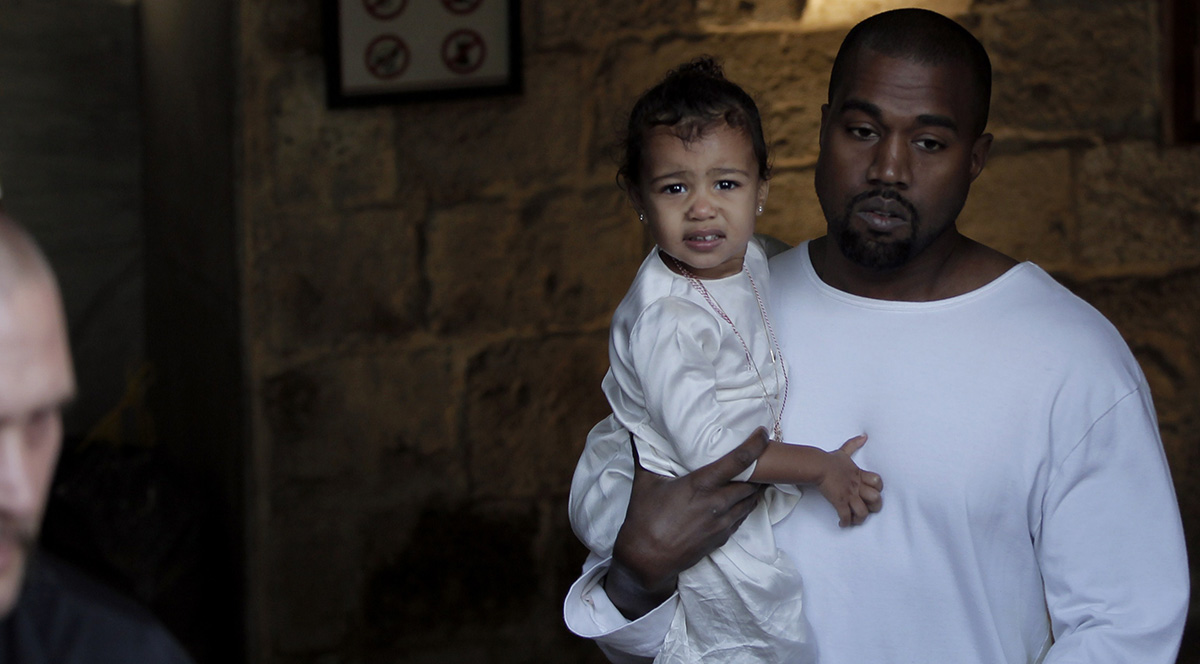 Several years ago, I was working as a freelancer for an alt weekly in Houston called the Houston Press. One of the bigger projects I worked on while I was there was this thing (unfortunately) titled The H-Town Countdown, where I was supposed to figure out the top 25 Houston rap albums of all time and write about each one. Every week, I’d write about one of the albums, explaining why it was important, counting backward from 25 to 1. It was a fun enough thing to work on, if not occasionally cumbersome.

After a few entries, I happened my way into a conversation with Matt Sonzala, a writer and culture curator with very strong ties to Houston who I’d always appreciated and respected. I explained what I was working on, talked about this or that, and so on. He asked me who the first three picks were, because that’s always what anyone asked when I told them about it. I told him and he said, “Good,” and I felt good. He asked who the last couple were and I told him and he said, “Nope,” and I felt less good. I asked which one he thought was wrong. He said no. 24, Pimp C’s Pimpalation.

We talked about it, mostly about how it was a piecemeal album that Rap-A-Lot Records, Pimp C’s record label, put together while he was in prison without much (if any) input from Pimp C. I told him I knew about that, but that it seemed to be more for my argument than against it. I explained that it was like taking a bunch of junkyard parts and building a Mercedes. So, the way I saw it, that meant it was an indirect (if not accidental) confirmation of Pimp C’s brilliance, which is why I felt it was important. It seemed like a sound argument. Matt thought on it for half a second, said “no,” and then said six more words that I have not forgotten and will never forget. He said, “A man’s art is his art,” and when he said that I knew he was right. He continued, “You don’t fuck with that. It’s not a Pimp C album. It’s a Rap-A-Lot album. And it might not even be that. It’s just some songs.”1

I thought about that conversation a lot in the time afterward, and I’ve come back to it on several occasions, and I come back to it now because it has to do with what this article is about: Playing rap music for kids. More specifically: Which rap music is OK to play for kids?

I don’t like censored music. I never have. The only time the censored version of a song has ever been better than the uncensored version of a song was Drake’s “Best I Ever Had” (the uncensored version was counterintuitive to the entire premise of the song). So mostly that means I don’t listen to rap music when I’m, say, driving my kids around. There’s no shortage of other options. There’s lots of old soul, and they like that a bunch. There’s Fela Kuti, and let me tell you that a 2-year-old humming a Fela Kuti song is basically the best thing I have seen in my entire life. There’s the most recent D’Angelo album, which I suppose is dangerous philosophically but generally safe as far as inflammatory language is concerned. And there’s even — hold on to your pants — actually just talking to your kids.

But should I find my heart being squeezed by the desire to listen to No Limit music, then we’ll listen to that, and we’ll listen to the unedited version, because a man’s art is his art. Mystikal was very frank: “Shake ya’ ass,” and while “Shake it fast” isn’t the most egregious alteration from his mission statement, it’s still an alteration. So, no thank you.

Now, let me be clear when I say that we don’t listen to rap often, but when we do it’s that way. And we’ve been doing it long enough that we already know which rappers we can listen to without the threat of too much inappropriate material, and which ones to avoid. So that’s the whole point of this. It’s the rap + kids chart. It illustrates which rappers you should and shouldn’t listen to with your children, should you so choose to listen to rap with your children. There are 14 on here. You can use it as a template to fill in the rest, I suppose. Here’s the chart: 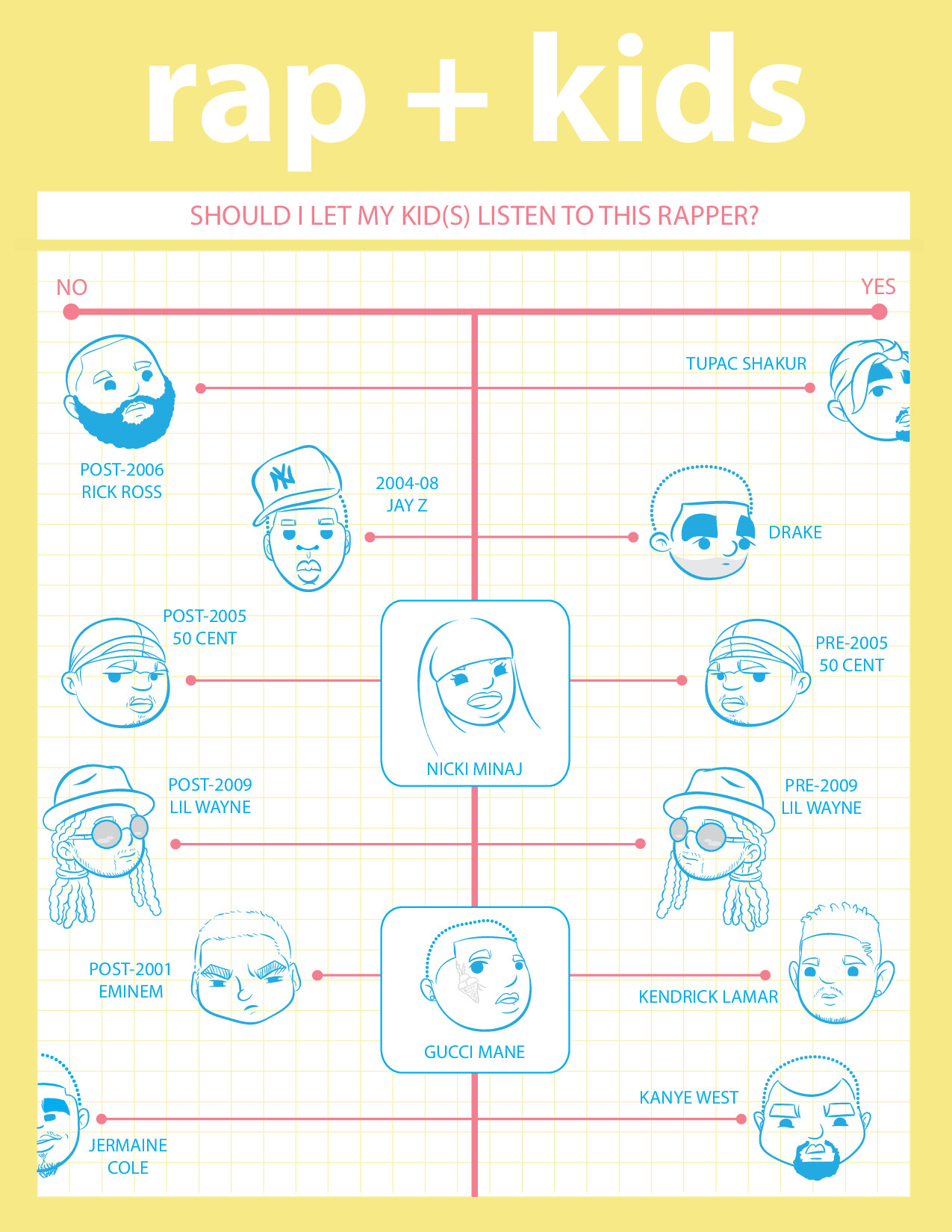 Now, let me also be clear when I say that while a percentage of it is rooted in language, mostly it’s based on good taste and bad taste, because being a bad rapper is way more offensive than just being an offensive rapper. Some notes:

My sons are fans of Rick Ross the human more than Rick Ross the musician because they are of the opinion that he very much looks like Waternoose from Monsters, Inc., and I suppose I agree with that. Music, though: The two exceptions to the Post-2006 Rick Ross rule would be 2010’s Teflon Don, the album where he perfected his gonzo reporting and a dazzling bit of fan fiction, and “Hold Me Back” from 2012’s God Forgives, I Don’t, a 100 percent fun song. Those two entries are vital. Beyond that, keep him away from your children.

There are certainly instances when he can be a tad aggressive, but Tupac is absolutely necessary. There’s just no way around it. Not playing Tupac for your kids is the same as not letting them play in the sun or never giving them fruit; they probably won’t die, but they certainly won’t be better off than if you had.

I’d sooner drive my car into the bayou than play Kingdom Come for the twins.

These two are judgment calls, really. They’re right on the divide between yes and no, and that’s because they can be real, true all-caps GENIUSES (Gucci Mane on “Lemonade”; Nicki on Kanye West’s “Monster,” of course, but if you need a more recent example, there’s also Nicki on Rae Sremmurd’s “Throw Sum Mo’” and anything she does with Beyoncé). But they can also be total toadstools, like Nicki anytime she rhymes one of those goofy “Like a injured Chris Paul, you ain’t got no point” lines; or Gucci on maybe 30 percent of his prison-recorded releases.

His 2006-09 run is legitimately in the Greatest Runs of All Time discussion. His 2009-present run is like if Norbit were six years long.

Pre-2001 Eminem includes The Slim Shady LP and The Marshall Mathers LP. That’s all you really need from Em. Those are his two sides. Everything since is really just a derivation. He’s zero fun. And I miss Fun Eminem so much. He used to say crazy stuff and everyone was like, “Hahaha, oh, Eminem.” Now he says crazy stuff and it’s just like, “Dude, what the fuck are you talking about?” and I understand that is a pretty terrible explanation of things, but it’s also kind of a perfect summation, too.

No new rapper from the last two years has positioned himself or herself better to have a long, meaningful, successful career than Kendrick Lamar. Not a single one.2

What a lot of people don’t know is I actually had four kids as recently as 2013. One of them, Shea Jr., we were all riding around in the car and “Crooked Smile” came on satellite radio and I changed it and he asked me to put it back on. I hear he’s very happy with his foster family.

Here’s a crazy thing to think about: Kanye West has never — NEVER, not one single time — had a bad album. Every single album is great. EVERY SINGLE ALBUM. Do you understand how impossibly hard that is?

We Went There: Celebrating 25 Years of ‘Goodfellas’ With Bobby D, Ray, Paulie, and Lorraine at Tribeca Film Festival