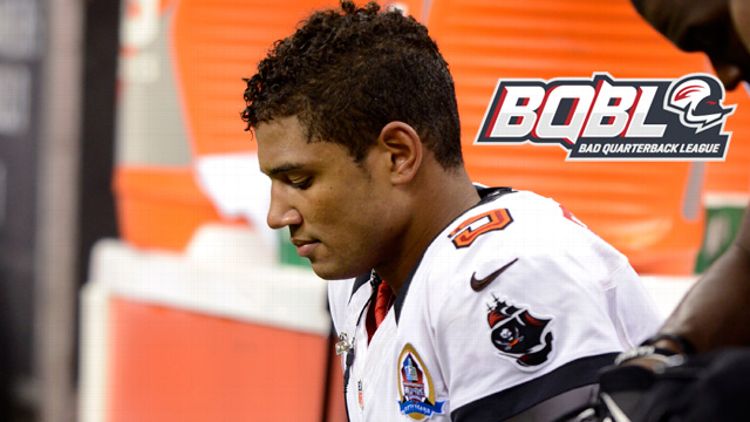 With all the rookie quarterbacks in the NFL BQBL this year, you’d think that there would be more fresh faces on the BQBL Summer Jam Screen. Aside from the artist currently known as Ryan Lindley, the rookie crop has been more or less serviceable. The most entertainingly inept TAINTers have actually been quarterbacks that were at one time labeled franchise guys, guys considered for the elusive (and ridiculous) “elite” label. Look at this week’s top three: Matt Stafford (remember when he was giving the Lions “swagger”?); Ryan Fitzpatrick (remember when his brain was saving Buffalo?); and Josh Freeman (someone that works here at Grantland may or may not have written less than a month ago that he continues “to be totally, unequivocally, 100 percent sold on Skinny Josh Freeman and the undeniably explosive Bucs”). Let’s see how that worked out in Week 14 for Skinny Josh Freeman and his “undeniably explosive Bucs.”

The best thing about absolute quarterbacking bed shittery is that the game of football becomes a Chinese finger trap — the more you struggle, the harder it is to get out of it. When Josh Freeman threw an interception, the Saints would score, and when the Saints would score, Josh Freeman had to throw more passes to come from behind, and when Josh Freeman threw more passes, he threw more interceptions. This was on repeat until Josh Freeman’s confidence was so low that all he wanted to do was run off the field in the middle of a play and go hide. At that point, Josh Freeman was replaced by a man who actually ran off the field in the middle of a play to go hide. No, for real, he did that. Let’s take a look at the newly svelte Mr. Freeman’s body of work this Sunday, drive-by-drive.

First Drive Result: Three and out.

Skinny Josh Freeman Highlight: Sets up screen for Mike Alstott Dallas Clark for two yards. I can’t be the only one who thinks he’s Mike Alstott, right?

Skinny Josh Freeman Lowlight: On third-and-4, he throws the ball directly into the chest of an oncoming defender. I honestly think he wasn’t trying to complete a pass; he was just trying to slow down the attackers.

Skinny Josh Freeman Highlight: Nice back-shoulder ball to Mike Williams for 24 yards. Not 100 percent sure it was intentionally thrown to his back shoulder, but whatever.

Third Drive Result: Three and out.

Skinny Josh Freeman Highlight: Nice out pass to Williams for 8 yards (they needed 9).

Skinny Josh Freeman Highlight: Honestly, handing the ball off for negative-4 yards was his best contribution on this drive. 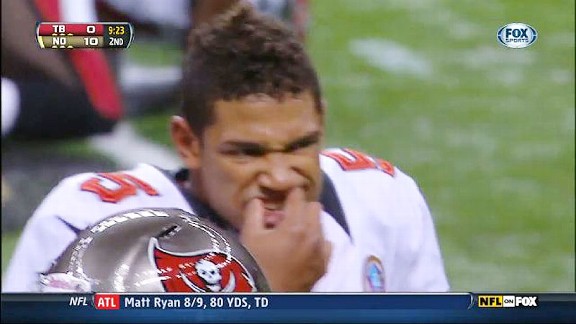 Fifth Drive Result: Four plays (A FIRST DOWN!) and a punt.

Skinny Josh Freeman Lowlight: Checking down to running back Doug Martin out of the backfield and then throwing the ball six feet over his head. Do you have any idea how hard it is to throw the ball six feet over someone’s head when that person is only six feet away from you? Try doing it. Your body won’t let you; it’s against human nature. Skinny Josh Freeman is defying human nature with this performance.

Sixth Drive Result: Three and out.

Skinny Josh Freeman Lowlight: I think his hair was the lowlight for this drive, too. It wasn’t featured or anything, but we all know it’s under that helmet.

Skinny Josh Freeman Highlight: After the kneel, he threw his best ball of the day — to the referee as he headed to the tunnel.

Skinny Josh Freeman Lowlight: None. This was his only drive without a lowlight. 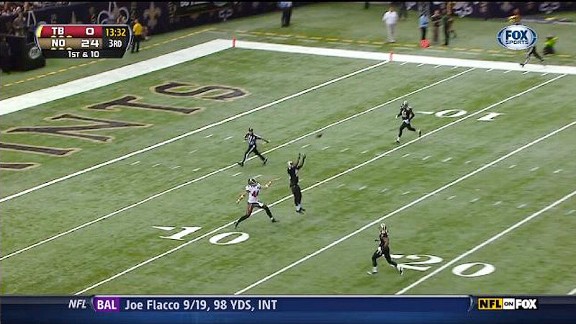 Skinny Josh Freeman Highlight: If you were a baby that was born with 6:31 left in the third quarter, and the first thing you did was turn and look at the Bucs game on TV, you would think that Freeman was having a hell of a day: 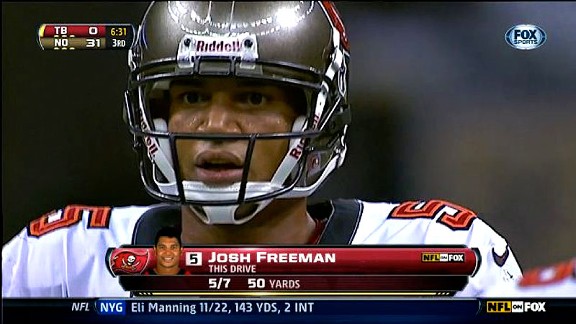 Skinny Josh Freeman Lowlight: Quarterbacks are often praised for throwing the ball away when no receivers are open. However, on fourth down, this is frowned upon.

Skinny Josh Freeman Highlight: Freeman throws a nice ball to Mike Williams in the end zone. Williams doesn’t, ya know, catch it or anything.

Skinny Josh Freeman Lowlight:> The part when the color guy says, “Josh Freeman has learned that just because Vincent Jackson is covered, doesn’t mean he isn’t open.” YES, IT DOES. HOW MANY INTERCEPTIONS DOES HE NEED TO THROW BEFORE HE UNLEARNS THIS?

Skinny Josh Freeman Highlight: Freeman throws a beautiful 60-yard spiral into the end zone. It was an interception, but it was a nice throw.

Skinny Josh Freeman Lowlight: When he got to the sideline and Bucs Head Coach Greg Schiano said, “Josh, I’m taking you out of this game for your own good. One more thing: When you’re on the bench, keep your helmet on. Not because I might put you back in, but because I just don’t want to look at that hair.”

Lions (Matthew Stafford), 82 points: Not only did Stafford double TAINT, he was a yard away from a triple TAINT. Sure, he was outplayed by Ryan “I still haven’t thrown a touchdown pass” Lindley, but he is still far and away the best quarterback in the NFL that graduated from the Institute of Style.

Bengals (Andy Dalton), 37: Ever since Andy Dalton’s gingered dome was featured on the first ever BQBL post, his career has gone pretty damn well. He doesn’t even really deserve to be this high in the BQBL rankings this week. It isn’t his fault that the Eagles aren’t good enough to force him to pass and pad his stats. Where is Nick Foles on this list anyway? Oh yeah, right there.

Eagles (Nick Foles), 31 points: Eagles fans are about two more Foles starts away from regretting the Kevin Kolb trade and one more Nick Foles start away from booing Santa Claus.

Clairvoyant Jacoby’s picks for next week’s leader board:
1) Zero chance Lindley gets out of a matchup with the Bears without a dozen turnovers.
2) Christian Ponder is going to do disgusting things against the Texans, without question.
3) Romo hasn’t thrown five picks in a game since Week 4, so, ya know, he’s due.

I Suck at Football, Week 15: If DeMarco Murray's Butt Were Candies and Nuts