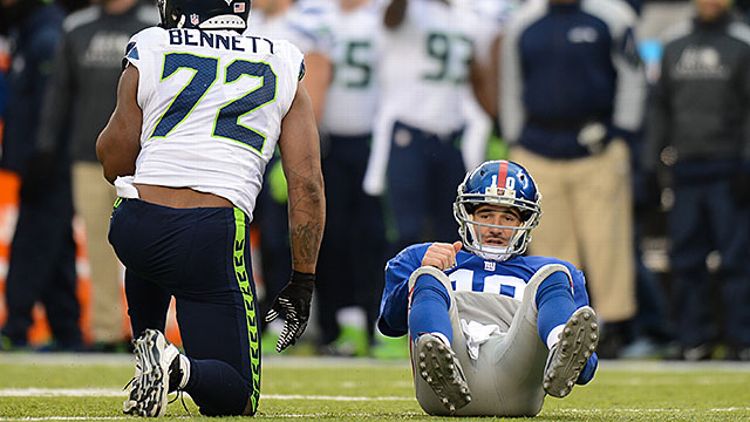 The season is winding down, and Eli Manning will not be denied. Back in Week 3 we wrote, “The Giants are so awful right now that either they’re going to win the Super Bowl or they’re going 5-11, Eli’s throwing 30 picks, and Tom Coughlin will pop five different blood vessels in his face.”

And here we are. Eli chose Option B.

Five interceptions Sunday, 25 on the season, and only 10 away from tying Vinny Testaverde for the all-time single-season record. It’s incredible. His numbers this weekend:

And hey! Thanks to Seattle shutting out the Giants this weekend, a Seattle car dealership paid out $420,000 to 12 different people this weekend. $35,000 each. They should make a United Way commercial with Eli and all those people in Seattle. Eli Cares.

The best part of all this is that he’ll have to play like this for at least another two years before the Giants even think about making a change. The Giants, the Jets, the Knicks … It’s been a magical year in New York City.

Elsewhere: The Raiders went full JaMarcus on Sunday, as Matt McGloin and Terrelle Pryor combined for five interceptions of their own, one pick-six, a benching, one fumble lost, and sub-50-percent passing on the day. Honestly though, the only surprising thing about this 134-point day is that it took until Week 15 for the Raiders to pull it off.

And Romo. You know how we know the BQBL formula isn’t perfect? Somehow Romo has avoided the BQBL all year long. Everyone can talk all they want about the Cowboys defense and Jerry Jones and Jason Garrett — all of them are huge problems that doom the Cowboys every year — and how Romo is actually a very good quarterback. Etc, etc. We do this every time Romo screws up.

Every time Cowboys fans get their hopes up, Romo does this to our heart.

Do you realize he actually checked out of a running play to throw that first interception on Sunday? The one that gave the Packers the lead? As soon as Jerry Jones announced this offseason that Romo would have more play-calling freedom, this is the exact scenario that flashed into every single Cowboys fan’s mind. The real evil of Tony Romo is the way he constantly makes you feel comfortable, tricks you into believing it’s not his fault, and then some time passes, you start to have faith, and he stabs you in the heart all over again. He gets +500 Bad QB points for pulling this off every year for the better part of a decade. A career achievement award.

Danny Savitzky has the rest of the numbers this week, and a big thank-you to Danny for helping out with this series all year:

And … The next two Tuesdays are Christmas Eve and New Year’s Eve, so you know what that means?

THIS IS THE LAST BQBL OF THE SEASON.

When Jacoby said he wasn’t going to be able to write the BQBL this year, I offered to help keep it going, and hoo-boy! This was not a good decision. But finally now, at long last, we can all move on.

Thank You for Not Coaching, Week 15