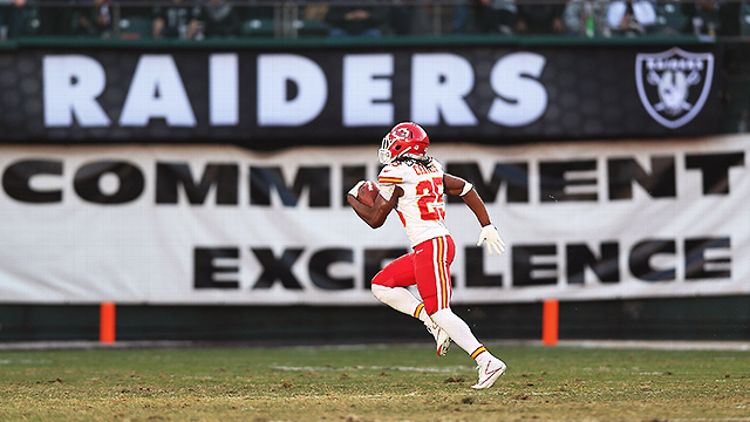 Remember those random weeks in 2012 when Romeo Crennel would inexplicably not use Jamaal Charles? The weeks when you wanted to rip through your TV screen and say, “Romeo, I realize your extensive coaching experience dwarfs mine, but why make this the Matt Cassel–Brady Quinn show when you have one of the best running backs in the league?” The idea of limiting Charles to five-ish carries seemed so ridiculous that I couldn’t help but wonder if Crennel was betting against his own team or something. (And let me tell you, as a Browns fan, that would explain a lot.)

If you owned Charles last year, you’ve surely tried to bury these memories in the back of your mind, but the pain of a lost fantasy season will linger. Charles’s current owners can’t relate: While Charles rushed for a mere 20 yards on eight carries against Oakland in Week 15 and saw backup Knile Davis poach a touchdown, Andy Reid is considerably better than Crennel at finding ways to keep his best offensive player involved.

This sort of thing happened early and often against the Raiders, ultimately leading to five touchdowns and 51 fantasy points for Charles, who has pretty much clinched fantasy MVP honors for 2013. Barring injury, Charles should enter next season as the consensus no. 1 overall fantasy draft pick, and his face will adorn all the preview magazines you hold dear in your print-loving heart. Charles has been king for a while, but Sunday was his official coronation. Watch the throne.

• We Hope That 0.4 Percent of You Are Very Happy: Is anyone in the mood for a fantasy horror story? I have one, but be warned, it’s not for the faint of heart. If you’re the sort of person who (a) requires a nightlight to fall asleep, or (b) cannot stand the thought of untapped riches, please move on to the next award. I don’t want you to become queasy and/or a felon, and the side effects of this tale include nausea and turning to a life of crime, among other horrible things. Got it? OK, here’s the story:

ONLY 0.4 PERCENT OF ESPN.COM OWNERS STARTED MATT ASIATA THIS WEEK!!!

Now, it’s hard to blame the other 99.6 percent; most people were already out of the playoffs, and everyone who was still alive thought Sunday was supposed to be Toby Gerhart’s day. Gerhart had performed adequately in place of Adrian Peterson in Week 14, and was a natural waiver wire pickup with Peterson expected to miss at least one more game. Gerhart suffered an injury of his own against the Ravens, but it was a “tweaked” hamstring, and, come on, who doesn’t play through a tweaked hamstring? Plus, coach Leslie Frazier was reportedly optimistic about Gerhart’s chances to play as recently as Friday, so there. While there was no guarantee that Gerhart would suit up, grabbing his backup still would’ve been a pretty desperate look in the playoffs.

Here’s a snapshot of the general consensus regarding Asiata’s fantasy value before the Eagles-Vikings game:

If you start Asiata….I am so sorry

Man. I hope you all don't have a serious decision to start Asiata tomorrow for your semi-final matches. Oy.

Per @RapSheet, Toby Gerhart is out. Matt Asiata will start. Ouch.

And here’s how that 0.4 percent felt after the game:

Of course, Asiata’s 24-point fantasy day belies that he wasn’t actually a very effective rusher, tallying just 51 yards on 30 carries. In a way, the owners who chose to sit Asiata or ignore him altogether were validated. Nevertheless, Asiata’s doubters were totally hosed by the back’s three touchdowns, which is exactly what makes this a bone-chilling horror story.

If a shooting star soars across the fantasy leaderboard but no one is around to see it, did it ever really soar?

• I See Your Asiata and Raise You a Lacy: Those of you who’d prefer to read a pleasant story about Week 15 should keep in mind that several widely started running backs also enjoyed impressive (and sustainable!) performances on Sunday. First and foremost, shouts to Eddie Lacy for spearheading the comeback that gave us more CAN ROMO EVER WIN THE BIG ONE? talk, which ranks right up there with snowball fights and Christmas lights in the pantheon of great December traditions. Sports-radio producers appreciate your efforts, Tony.

Meanwhile, fellow rookie running back Zac Stacy drove Rob Ryan’s blood pressure higher than any Big Mac ever could, and DeAngelo Williams flourished in the absence of Jonathan Stewart. Rashad Jennings didn’t hesitate to fuck over every deep PPR-league owner counting on 10 points from Marcel Reece, and the 294-pound Sheldon Richardson effectively demonstrated how vultures come in all shapes and sizes, asserting himself as the week’s top waiver wire pickup in leagues that award bonus points for fat-guy touchdowns.

1. Has anyone considered the possibility that Tucker, a Texas alum, will eventually go down as Mack Brown’s greatest legacy?

2. Tucker is now two points ahead of Stephen Gostkowski on the fantasy kicking leaderboard, setting up a massive individual showdown when the Patriots travel to Baltimore in Week 16. NO TOUCHDOWNS ALLOWED.

3. After the game, Tucker graciously acknowledged all the “fantasy owners around the world” and even admitted that his “fantasy team is benefiting” from the performance. NOTE TO SELF: Always draft a kicker who owns himself in fantasy. It’s the ultimate sign of confidence.

Also worth mentioning: A (seemingly) fine young man named Logan went into Monday night rather confident that he’d successfully complete our Challenge of the Week, which required him to win with Kirk Cousins as his starting quarterback.

Tucker didn’t quite reach 32.3 points, but he came awfully close; so close that I sincerely doubt Logan will ever again count his chickens before they hatch. Justin Tucker: Making field goals like it’s nobody’s business and teaching folks valuable life lessons AT THE SAME DAMN TIME.

• Obliviate! Contrary to popular belief, I didn’t write last Thursday’s column. Due to a technical glitch, the post was mistakenly credited to me and, for a number of complicated reasons, never got corrected. So no, I didn’t call Jacob Tamme an angel, and I certainly didn’t claim that Shane Vereen would be a top-five running back. Nope. Wasn’t me.

HOWEVER, if I had proffered such retrospectively horrendous advice (and we’re speaking purely in hypothetical terms here), my response would have been as follows: Andre Caldwell’s pair of touchdowns confirm that someone other than Demaryius Thomas, Eric Decker, and Julius Thomas was bound to thrive in Wes Welker’s absence, and before Thursday night, there were good reasons to believe that someone would be Tamme (namely, that Tamme saw six targets after Welker went down in Week 14, whereas Caldwell only saw one). As for Vereen’s four-point day, well … maybe Bill Belichick is just preparing to take over as the NFL’s chief nightmare for fantasy owners once Mike Shanahan gets fired. That’s the only explanation. I don’t know. Start Julian Edelman at your own risk.

1. WR Randall Cobb, Green Bay Packers (available in 40.6 percent of ESPN.com leagues): Despite his relatively high ownership total, I’m including Cobb here because sometimes players who suffer major injuries languish on the waiver wire longer than they should. Many owners are often leery of wasting a roster spot on someone who’s not going to play for a while, so there’s a chance, albeit an outside one, that Cobb is available in your league. Cobb is finally eligible to come off injured reserve, and with the Packers gunning for a playoff spot, he could definitely suit up this weekend, especially considering coach Mike McCarthy called Cobb’s Monday workout “very good.”

2. RB Jordan Todman, Jacksonville Jaguars (97.7 percent): Admittedly, this recommendation will largely be rendered moot if Maurice Jones-Drew returns to face the Titans, but hey, the running back options are slim, and MJD is going to be a free agent this offseason. Jacksonville might want to see how Todman handles a full workload over the course of multiple games, thereby making the team’s decision regarding MJD’s impending free agency an easier one either way. Regardless, Todman might actually be the better back, at least right now.

In 3 quarters, Todman has more rushing yards than Jones-Drew has had in any game this year. And Jags want to re-sign MJD?

3. Lions D/ST (91.9 percent): You’re in your league’s championship game. You have relied on a defense-by-committee all season long, and playing the matchups has served you well. You need one more sure thing, a defense that is more or less guaranteed to wreak major havoc on the opponent, putting you in prime position to take home the crown. You claim the Lions D/ST, because the one constant in life is that Eli Manning will throw picks, often resulting in defensive touchdowns. You are not disappointed.

4. TE Zach Ertz, Philadelphia Eagles (98.1 percent): If you’re extremely desperate at tight end and need a quick fix, you could do worse than Ertz, who has notched double-digit fantasy points in two of his last three games. Still, this recommendation is geared more toward dynasty-league owners who’d be able to keep Ertz on their rosters into 2014 for a relative pittance, because he should be a much bigger (and more consistent) factor in Philly’s offense next season. That is, unless Chip Kelly leaves for Texas.

From the moment the early games kicked off on Sunday, it was readily apparent that Week 15 would be one for the history books.

First touchdown of the day goes to a guy named Griff. Griff Whalen 14 yards from Andrew Luck gives the Colts a 7-0 lead over Houston

Griff “Gryffindor” Whalen, the man who started all of this Challenge of the Week nonsense, had scored. Surely this foreshadowed great things for Cousins, the subject of our Week 15 challenge, right? Right?

Blame it on the easy matchup, the temperature-controlled environment, or the fact that Shanahan actually acknowledges Cousins’s presence at Washington’s facilities, but KC1 scored 21 fantasy points on Sunday, good for seventh among all quarterbacks, and you can’t prove it wasn’t because of this very challenge. There were too many winners to count, but most impressive of all was @MikeinRealLife’s double whammy of dethroning teams led by Peyton Manning and Drew Brees.

@mattborcas 2 for 2 on the Cousins Challenge- WHAT UP PEYTON AND BREES pic.twitter.com/ROKXAN1Kw4

We have something special brewing here, folks, so check back on Thursday for an easy road to championship glory. In the meantime, keep your loved ones close and Kirk Cousins closer.