I Suck at Football, Week 15: If DeMarco Murray’s Butt Were Candies and Nuts 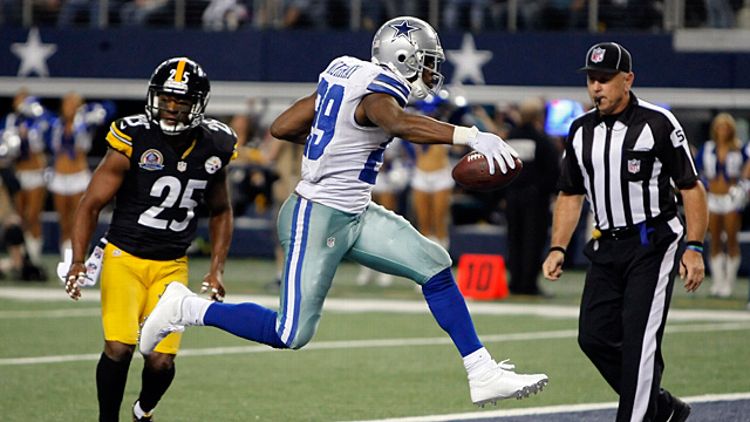 Erwin Schrödinger’s in town, so we meet at Ye Rustic on Thursday night. The Bengals are playing the Eagles, and for some reason this historic contest of champions is being broadcast in prime time. Schrödinger and I are, respectively, the third and fourth people who show up to watch it unfold. We could have gone somewhere cooler and done something better, but I want him to see how I actually live, and while I’m not totally comfortable with what this says about me, this really is a pretty significant part of how I live these days — in the back of Ye Rustic with a notebook open, half-watching pro football and contemplating what I hope to gain by doing so. Besides, Schrödinger’s taste in surroundings is even worse than mine, so he grasps the charms of the place immediately — the wood paneling, the aquarium-glow lighting, the on-point and prodigiously inked-up wait staff. “They look like retired Suicide Girls,” he observes, which is totally true.

The Bengals win 34-13, but those blowout-ish numbers don’t capture what a sad-trombone-off the actual game is. It’s a case of uninspiring football triumphing over even-less-inspiring football — even I can see this. The Eagles are already out of playoff contention, and they clearly care even less about this game than America does, and yet they still manage to sack Andy Dalton six times before it’s over, and they’re actually leading 13-10 until the end of the third quarter, when they begin repeatedly dropping the ball and end up giving the Bengals no choice but to score 24 points in a little over three minutes.

Schrödinger and I get into this long conversation about the interplay of responsibility and guilt in friendship (complex) and about whether any form of creative endeavor is worth pursuing if it isn’t personally satisfying (maybe) or if we’re all doomed (probably). These are important things; it’s important to let these dark thoughts into the light once in a while, even if it’s bar light. But we end up missing a lot of really outstanding physical comedy. I catch up later, on the Internet. The big GIF-able moment of the game is clearly the Eagles’ Mat McBriar punting the ball directly into his teammate Marvin McNutt’s armpit, which many pundits cite as a season-encapsulatingly metaphorical occurrence for the Eagles, but personally I feel like it’s the inopportune second-quarter conjoining of Andre Smith and Brandon Graham’s helmets that says the most about the epic passion play that is pro football on a Thursday night in mid-December. It seemed like a good idea at the time.

Then, on Sunday, two weird things happen: I watch football with my wife, and together we end up seeing DeMarco Murray’s whole entire ass on television.

Some backstory is probably in order here: My wife was married once before, to a man I have never met. In general I feel nothing but fondness and gratitude toward the men my wife dated before me, because I wouldn’t be here with her today if they had not somehow blown it. These anecdotal dudes, with their deal-breaking personal issues, their shaky hands, their allergies to commitment and/or bees, their unprompted reading-aloud from their dream journals in front of company, their insistence on visiting Jim Morrison’s grave unironically — I owe them, one and all. But in a way I owe my wife’s ex-husband the most. No matter how much I fail in this relationship, I will still be the best husband she has ever had; he set the bar, and he set it low. He exists in my mind as a collection of stereotypes, a figure from those letters to the presumably fabricated oh-no-he-didn’t columns of women’s magazines, letters that in this case would involve back-hair maintenance and the Christmas-gifting of Dirt Devils. He drove a Miata and kept his collection of Rush CDs in a laundry basket, a detail from which we can extrapolate (I’m just realizing this now) that he owned enough Rush CDs to fill a laundry basket.

He was also a sports fan. He loved the Pittsburgh Steelers. And in the course of their marriage, my wife grew to hate televised sports and specifically football on a visceral level, and more specifically the actual sound of football on TV, which she associated with lost Sundays, life passing her by — and this was never a problem for us, up until I started watching pro football and then, worse, started actually caring about it.

Other than occasionally noting that these columns basically wouldn’t exist without her and our daughter providing me with material — which is totally true — my wife has given me only one note on her appearances in this space, namely that I’ve repeatedly described her as frowning, at her nails or her phone, or me. So I need to say that by portraying her as a disapproving presence I’m under-representing the degree to which she’s supported this asinine suicide-pact I have going with the Bengals and tolerated the ambient clamor of football in our not-large home despite the associations it brought up. It can’t have been easy, loving a man who awakes one morning having chosen to start loving the Cincinnati Bengals, as opposed to something explicable, like the Juche Idea or the bassoon.

But Sunday was cold and damp in L.A., and we’d been out too late at a Christmas party the night before to really consider doing anything ambitious, and we’d finally convinced the kid to lie down for an interval of time that met the dictionary definition of a nap, and I needed to watch football to write about having watched football, so there we were, watching the Steelers-Cowboys game as man and wife. And, OK, she looked up from her iPad infrequently enough that describing this game as an experience shared is an overstatement, but we were there, spanning time, sprawled and curled on the couch, with the cats coming and going and being dickheads and the kid howling from the other room and having to be negotiated with every 20 minutes or so, and football was a part of that day, just a facet of our existence rather than a disruptive force.

The Bengals’ playoff hopes hinge on a game against Pittsburgh on December 30, which has so much weird resonance — my team against my wife’s ex-husband’s team, like a referendum not just on the teams involved but on football itself, and whether it’s possible to be a fully present human in the world and also a true-and-therefore-obsessive-and-irrational fan, of sports or anything else — that I almost don’t want to talk about it. Too on-the-nose, too symbolic. It’s like some kind of Aaron Sorkin fanfic in which my wife’s ex-husband is Steve Sisco and the Steelers-Bengals game is the tape of Orlando Rojas’s return to the big leagues. I don’t want to think that way. Enough’s at stake as it is. The Steelers lose to the Cowboys in overtime, but not by much. They look like a team that could beat the team that beat the Eagles on Thursday. At one point, Ben Roethlisberger did this triple-pump-fake spin-move thing, sending assorted Cowboys jumping all over the place for balls that weren’t actually there, and it terrified me; I know now that it’s kind of his trademark, but I’d never seen him do it before. Andy Dalton, God bless his delicate equilibrium, does not seem to have this kind of mustardayonaise in his condiment bar, this gift for in-the-pocket subterfuge. I am concerned.

Anyway: DeMarco Murray’s butt. I know this sort of thing happens fairly often, and that wardrobe malfunctions in general are part of life in the NFL. As it happens, I was watching Super Bowl XXXVIII when the Janet Jackson thing happened, but missed the actual happening of the thing; some hipster dad stood up to more effectively dandle his fussy baby at what turned out to be the exact thing-happening moment, obstructing my view of television history. So there was something redemptive about being there and seeing DeMarco Murray’s butt show up on live daytime network television, where there are not supposed to be butts — it was like seeing an eclipse or a leprechaun. “Look,” I said to my wife, “you could totally see that guy’s butt,” and she said “No way,” and then we rewound it a couple of times, because we are basically 12-year-old boys. By that point I was already thinking ahead to Steelers-Bengals and worrying about the outcome; on some level I think I knew that this was the last moment of football-related enjoyment I would have for quite some time.