We Went There: Grand Central Station’s Rumble on the Rails 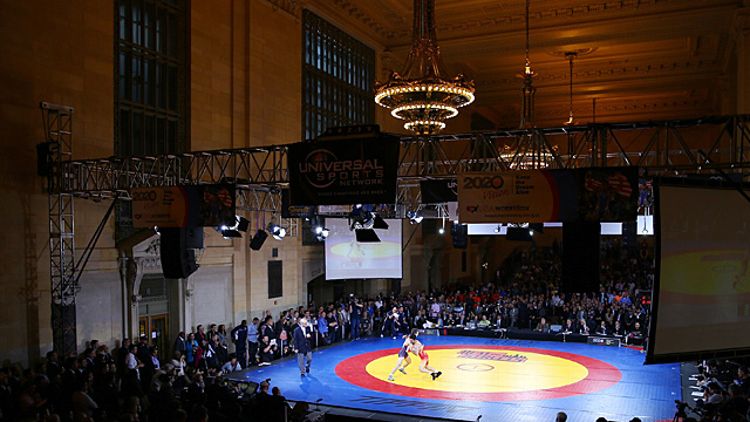 “Are you ready to RUMBLE?!?” a man wearing sunglasses, a black suit, impressively shiny black shoes, and an American-flag bow tie asks as he stands on a raised wrestling mat.

The Iranian supporters standing in the temporary bleachers on the other side of Grand Central Station’s Vanderbilt Hall most certainly are. They explode into cheers, waving green, red, and white flags in sizes ranging from pocket-appropriate to mini-tifo, and blow air horns.

After a stirring rendition of the national anthem of the Islamic Republic of Iran, a trumpeter steps onto the mat and plays a single scale. He follows those notes with a version of the “Star-Spangled Banner” that features the types of flourishes and embellishments one might anticipate of a national anthem played by a solitary trumpeter.

The final notes echo around the hall. The cheers rise. We are indeed ready to rumble.

“Rumble on the Rails,” a collaboration between USA Wrestling and the urban youth wrestling nonprofit Beat the Streets, features the American national team facing off against Iran and Russia in two dual meets. The goal is to promote the sport and gain momentum for the movement to keep wrestling in the Olympics. In February, the IOC recommended that the sport not be included in the 2020 Olympic Games. A final decision is coming in September. Vanderbilt Hall, which sits just off Grand Central Station’s main area, is filled with variations on a “Keep the Dream Alive 2020” theme. Banners hang from the ceiling, while volunteers wearing bright orange shirts reading “Keep Olympic Wrestling” hand out red, yellow, and blue bracelets featuring the slogan.

There are also speeches that echo that sentiment between each individual wrestling match. The president of FILA, wrestling’s international body, attempts to pump up a crowd that simply wants more action. Former gold medalist and WWE star Kurt Angle wears an Affliction shirt, smiles for a few photos, rambles on for a bit about his love of the sport, then steps aside and departs almost immediately. Billy Baldwin, who wrestled for two years at Binghamton University and is introduced as “one of the superstars of our sport,” tells the audience that wrestling is able to do something no American president has, namely getting “Russia, Iran, and the U.S. on the same page.” Echoing that theme, a later speaker builds to a crescendo: “We are not speaking Farsi. We are not speaking Russian. We are not speaking English. We’re speaking wrestling!” Not surprisingly, security is high. Walk-up ticket sales are not allowed, and guards are everywhere. One was standing in the men’s room, which seemed a little extreme, although I quickly realized he was waiting in line to go to the bathroom rather than guarding the urinal.

Despite the speeches and the hope they hope to engender, the wrestling is the highlight. The first meet features Iran against the U.S. in freestyle. A freestyle wrestling match consists of three two-minute periods with a 30-second extra-time clinch period if needed. Wrestlers score primarily through takedowns, which between two relatively evenly matched opponents frequently occur in the dying stages of a period, as minuscule advantages gained over the previous 100 seconds pay off in the final 20. It looks exhausting, an observation that’s confirmed after seeing the wrestlers still breathing deeply five, 10, or even 15 minutes after their matches. 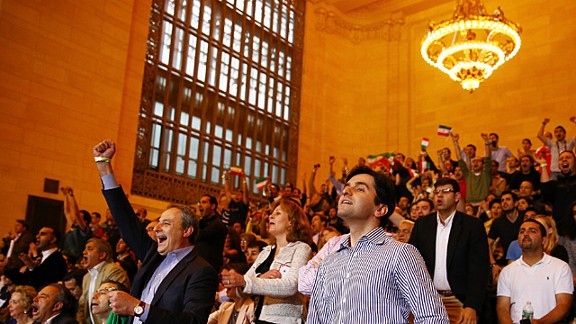 The visitors have the better team, and also boast better fans, full-throated, T-shirt-wearing supporters screaming “E-ran, E-ran” from their bleacher seats. They’re ecstatic to be in the same space as their heroes. (The U.S. “fans” have a distinct corporate vibe to them.) The Iranians cheer throughout, taking momentary breaks to purchase bottled water from a Zaro’s Bakery vendor who does less-brisk sales in the black-and-white cookie department.

Iran wins all but one match. The lone American victory comes in the 163-pound class. Kyle Dake, a 22-year-old, four-time NCAA champion at Cornell, defeats 31-year-old Hassan Tahmasebi in dramatic fashion. As soon as the whistle signaling the start of third-period extra time blows, Dake picks up his opponent and throws him to the ground in emphatic fashion. A few minutes after the match, I ask Dake about the move. He offers a soft handshake that is diametrically opposed to the violence and power he displayed in the ring and casually says, “That’s just a high-crotch finish.” Noted.

Unlike most athletes, Dake and his fellow wrestlers are smaller in person than you might imagine, short and stout being the preferred body type. (Also smaller in person: Jimmy Roberts, who is conducting interviews for NBC.) Tervel Dlagnev, a 27-year-old Bulgarian American who finished fifth in London and wrestles in the afternoon’s last match, is the exception. He wrestles in the 264.5-pound class and resembles a rather small, agile bear with walls of muscle instead of quads. His equally hairy opponent, Komeil Ghasemi, looks similar, only a little quicker and a little stronger. He is, inevitably, the winner.

But the score of the exhibition doesn’t matter. This event is about the sport and its uncertain future. The Iranian supporters scream for the Americans as well as their countrymen. “I think they realize that we need to save Olympic wrestling. For them to cheer for Iran isn’t enough,” Dake says. “They need to cheer for the U.S., too.”

After the conclusion of the first match, the announcer calls all three teams to the mat for a moment of solidarity. While the U.S. and Russia, which will face off later in the evening, wait for the Iranian team to arrive, the Russians pose for a photo. Dake offers to take a picture with one of their smartphones. While he’s adjusting his angle, another phone slides to a stop at his feet. He looks down, peers back up at the Russian who sent it his way, smiles, and picks it up to take another picture. It’s important that as many people as possible get a chance to preserve the memories.