112-Day NFL Warning: It’s Time to Rethink Some of These Uniforms 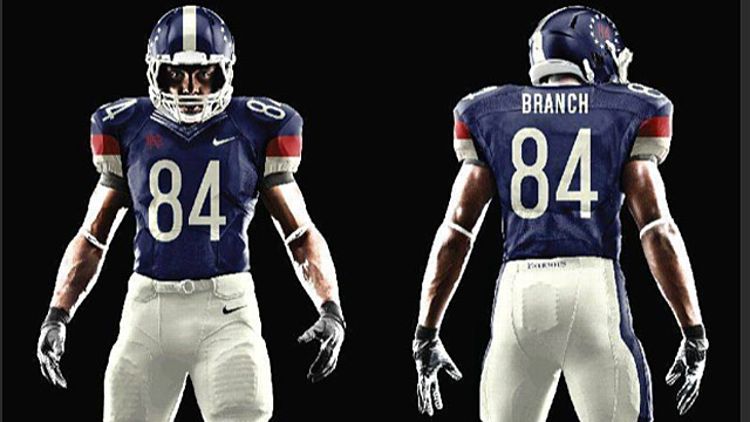 For about five minutes last year, the NFL’s switch to Nike uniforms came with the thought that, just maybe, this would mean a revamp for some of the league’s lesser designs. But because every NFL decision-maker’s job is to make football as little fun as possible, the uniforms were introduced, and nothing had changed (a little neon green and a sleeker panther don’t count).

This year, Minnesota, Jacksonville, and Miami all underwent some tweaks, but mostly, it’s more of the same. For some teams, a resistance to change is understandable. The Steelers have had essentially the same uniform for 40 years, and if anyone tried making any wholesale changes to the Bears’ jerseys, I would almost guarantee a riot. That type of tradition doesn’t go for everyone, though, and there are some teams that really could use a change. As always, cue enterprising users.

This Patriots redesign (full uniform above) was passed along by reader Jorge from Anaheim, who came across it in this Reddit thread.

The design comes from someone with the user name kuyakew, and I’ve gotta say, it’s about 100 times better than whatever this is. A full explanation of the inspiration is in the thread, but it makes (at least some) sense, mostly because almost all of the choices have something to do with the region’s history. I get that Green Bay wears these things because it’s what the franchise wore 90ish years ago, but if teams are going to spend two weeks a year wearing alternate jerseys, couldn’t we at least make an effort to do something original? I mean, hell, hire this dude.

If you’ve seen any other designs, leave them in the comments. It’s about time we got moving on this, because I’m not prepared to sit by and allow more of the same. The National Football League, where its complete lack of creativity demands some of our own.

Donovan McNabb Is Going to Make a Great Eagles Fan

We Went There: Grand Central Station's Rumble on the Rails