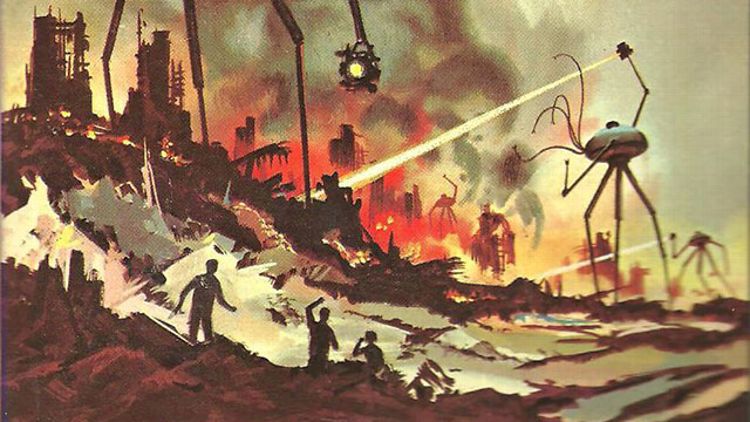 The U.S. of A. has been through a lot in the past century of cinema — from hostile aliens to zombies to the terrorist masterminds Gerard Butler must outsmart in this weekend’s Olympus Has Fallen, it seems like everyone’s out to get us. Join the Grantland staff as we reminisce about all we’ve weathered as a nation in film, TV, video games, and yes, a little long-form radio as well.

Robert Mays: On the list of embarrassing facts about my life, which in length falls somewhere between Ulysses and Infinite Jest, that it took until 2013 for me to see the original Red Dawn ranks pretty high. Russians invade the U.S., and Patrick Swayze, Charlie Sheen, and Powers Boothe have to fight them off. There’s no excuse for having seen that fewer than 20 times. Especially since now that I have, I’d probably consider it the best cinematic achievement of the 1980s.

I couldn’t pick one specific scene because really, that’d just be cheating everyone. The campfire is pretty great, and “Avenge me!” is obviously a winner, but my favorite scenes are any that involve Jennifer Grey with a machine gun. Nobody puts Baby in a ground war.

The War of the Worlds

Bryan Curtis: If you want to imagine what an American invasion would be like, do two things for me. First, listen to Orson Welles’s amazing rendition of The War of the Worlds. Then, read the New York Times.

Back in 1938, Welles took H.G. Wells’s invasion novel and gave it a pulpy, American update for his Mercury Theatre radio program. In Welles’s telling, it was New Jersey, not England, where the Martian craft landed and disgorged its aliens. Welles improved the tone of Wells’s prose, too. We humans, he noted, inhabit a “small, spinning fragment of solar driftwood, which by chance or design man had inherited out of the dark mystery of time and space.” Welles had turned the cheese factor to 11.

A front-page story in the October 31, 1938, New York Times reported that the Welles broadcast caused a panic in the tri-state area. The story reads like an account of an actual invasion. People imagined they’d heard the president on the radio. Someone called in the news to a bus terminal, before stating, “[T]he world is coming to an end and I have a lot to do.” In one of the Times’s more fantastic details, Harlem churchgoers were said to receive the news of the invasion “in stride”; no heat ray or gas attack could shake their faith.

The writer Edward Jay Epstein argues that the Times account (which was followed by many similar stories) was bull. Less than one-tenth of 1 percent of the radio audience called in to verify the reports — and since Welles had presented War of the Worlds as a series of “news bulletins,” a confirming call wasn’t out of order. “The subsequent examination of the statistical data from that night show that there were no abnormal fatalities, hospital admissions, or traffic accidents,” Epstein writes.

With War of the Worlds, then, you have either (a) a simulated invasion panic, or (b) the press’s simulation of a simulated invasion panic. It sounds pretty modern, like The Matrix of 1938. The Times story further notes that an Ohio man called the paper and asked, “What time will it be the end of the world?” If the Huffington Post had been around, they would have blogged that.

Sean Fennessey: This scene sure feels strange now. The box office data-tracking website Box Office Mojo maintains a category called “Terrorism,” and as I pondered a choice for this week, I stumbled on it. Turns out “terrorism” is not a terribly rich text for moviegoers — only three of these movies even cracked the $100 million threshold. All the way down at no. 17 sits Fight Club, a largely unsuccessful movie, financially speaking, that has been misinterpreted by zealots, mangled by cultural watchdogs, and lauded by people you wouldn’t trust with your pet hamster. Its ideas have been obscured over the years, made blurry by local news reports about real fight clubs in your backyard — film at 11. Fight Club is about a lot of things, but one of them is, literally, attacking this country to prove a point. The above clip was always beautiful and anarchic, but it has a trauma inside of it now; it feels icky and, for some, tasteless. The movie is a farce, but in the aftermath of its release, it became a bellwether for dumb people talking loudly about their bad ideas. That isn’t changing anytime soon.

Mark Lisanti: Roddy Piper has come here to chew bubble gum and kick ass. And he’s all out of bubblegum, because you can’t just go out and buy some more bubblegum like nothing’s wrong after you put on a pair of magic Ray Bans that reveal each pack of Hubba Bubba contains a subliminal message to OBEY and SUBMIT. And America is already under attack by the skull-faced monsters living among us. So maybe you just have to skip to the ass-kicking part and forget about the bubble gum for a minute.

Andy Greenwald: Released in 1996, Tim Burton’s bubblegum-schlock Mars Attacks! — based on a ’60s trading card set, starring Jack Nicholson in multiple roles — was either hopelessly outdated or way, way ahead of its time. After spending a few moments perusing the movie’s Wikipedia page and learning that a script polish was done by Martin Amis and being reminded that the supporting cast included Rob Steiger, Michael J. Fox, a young Jack Black, and an even younger Ray J, I’m starting to think that the entire project was wildly advanced. Regardless, this clip reminds us of two important lessons, valid in any era: Never trust a bug-eyed martian, but trust a hippie even less.

The Twilight Zone, “To Serve Man”

Tess Lynch: I guess the Kanamits weren’t only choosing free-range organic Americans to invite back to their home planet for brunch (they spend a lot of time addressing the U.N.,) but we are the most filling. (Watch the full episode here.)

Charles. P. Pierce: Charlton Heston played Andy Jackson not once, but twice, but never better than in The Buccaneer, in which he sparred with Yul Brynner as Jean Lafitte, the pirate king, as they created an uneasy alliance to defend New Orleans against the British in the famous battle that was fought after the War of 1812 had already ended. Nobody in the history of movies was better at playing stiff-necked authoritarian heroes than Heston, and his “Bah the Eternal, I’ll declay-ah martial law here!” is the top of the form, cowing, among other local poltroons, Lorne Greene, as the New Orleans merchant who eventually sells out LaFitte. By the Eternal, this is why we don’t need passports to go to JazzFest every year.

Honey, I Blew Up the Kid

Emily Yoshida: A fun fact about me is that I can’t go to Las Vegas without thinking about Honey, I Blew Up the Kid. I like to think of the climactic scene being a metaphor for the ill-conceived family-friendly makeover the city tried to give itself in the mid-’90s — Sin City terrorized by a giant toddler, reminding all the transgression-seeking tourists that they, too, are all just giant babies cooing and swatting at the pretty lights. I just made that up, but shit gets mad Freudian after this scene, so who knows.

Megan Creydt: See, we’re destroying ourselves, is the point. I had a hard time getting through this movie. Eighty-four minutes of total idiocy is too much. But don’t tell me Ow, My Balls! doesn’t ring a bell.

(AquaHydrate is what your body craves!)

Mike Philbrick: Movies are great, sure — but those are so 20th century. If you really want to get your Gerard Butler on, fire up Call of Duty: Modern Warfare 2. There are other missions you can try — like “Wolverines” (inspired by the first/real Red Dawn) and
“Second Sun” (where you dodge falling helicopters that were felled by a nuclear blast), but for this space, “Whiskey Hotel” definitely does the trick. You are Private James Ramirez of the 75th Ranger Regiment, and after fighting your way to the White House (watch out for the Russian soldiers with the RPGs on the roof, they will definitely leave a mark) you have less than two minutes to get to the roof to signal the United States Air Force to NOT blow up all of Washington, D.C. Yes, it’s exactly like the ending of The Rock, but it’s still a fairly awesome ride.

Addictive, too. Don’t believe me? Just ask Quinn Pitcock, who went from first-team All-American at Ohio State to first-round pick of the Colts in 2007 to playing for the Orlando Predators of the Arena Football League. Why? He had to quit the NFL because he was addicted to this game. Pitcock: “I’d go to McDonald’s for breakfast, order a bunch of food, come home and play for 18 hours into the next day, then crash, sleep for seven hours and do it all over again.” I don’t know what his problem is; I did that my entire sophomore year of college with NHL ’95 and I turned out fine. One more thing: For those of you who need compelling dialogue even in a video game, here’s how this mission closes.

Ranger: “So when are we goin’ to Moscow?”
Cpl. Dunn: “Not soon enough, man. But I know we’re gonna burn it down when we get there.”

While revenues from this game eventually passed the $1 billion mark, I’m guessing sales were lighter in Russia.