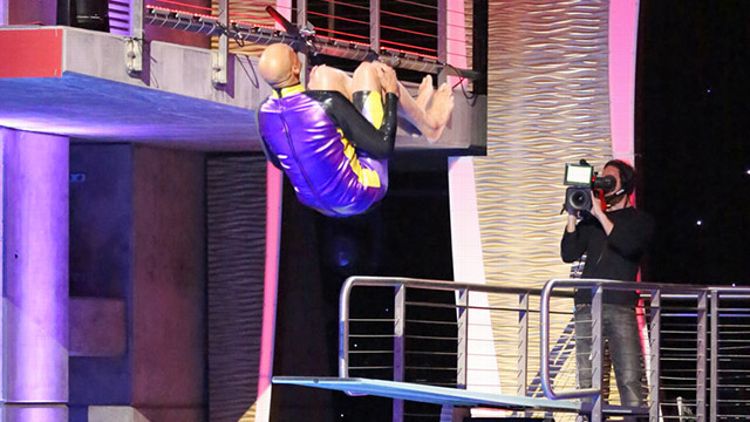 It’s finally here. The ABC show of the late-winter/early-spring/St. Patrick’s Day–to–Memorial Day corridor we’ve all been waiting on.

Rumored by some as a last-minute addition to President Obama’s American Jobs Act, Splash is an elimination reality show featuring 10 people of varying levels of celebrity and employment that centers on mastering the art of the high dive.

The contestants (in order of importance):

Mentor of the competitors: Greg Louganis.

Fantastic, indeed. Interestingly enough, though, it gets even better.

Who’s that co-host on the right that looks extremely familiar?

The episode begins with this insane Cirque du Soleil diving sequence, capped off by dramatic entrances by the contestants all wearing assorted-colored bathrobes, all while Pitbull’s “Don’t Stop the Party” blares in the background.

There was happy Kareem:

Louie chasing after Webb while four O-Town alternates dance around them:

Wilkinson in the house, ready to disrobe and compete:

And finally, the whole gang.

Before diving into the episode (FIRST PUN), some predictions:

After a belly-flopping training montage, Louganis asks the contestants who wants to jump off the high board.

No one says anything. For a while. Finally, a brave soul volunteers:

I told you she’s going to win. She’s brave. What comes next?

“When I saw Katherine go first, I definitely saw the game was on.”

After this, we go to the pool/live studio audience where five of the contestants will dive this episode. And, as ringmaster Joey Lawrence tells us, the two divers with the lowest scores from the judges and the studio audience will have a DIVE-OFF to see who goes home.

Before each contestant’s dive, there’s a montage where we learn about the person. Keshia Knight Pulliam’s was pretty cut-and-dried, which was followed by her bedazzled dive from the lowest platform:

This isn’t important, because next up was Louie Anderson, the official point that the show took a turn toward The Biggest Loser meets Extreme Home Makeover. Between the struggle for Louie to get out of the pool and Kareem telling Louie that he was going to get healthy and Louie starting to cry, Splash suddenly got super real.

And then he got up on a board, decided he wanted to jump from a higher one, and then dedicated it all to the troops and IT GOT EVEN REALER.

And then it was time to blast off.

He owned it. Louie is now the most likable character in the competition. Sorry, Drake Bell.

Next up: Katherine Webb.

After a montage about wanting to be more than “hair and makeup,” she goes up to the board, says “Brent Musberger, this dive’s for you,” and prepares herself for greatness:

While not completely allowing the viewer to forget about hair and makeup, she turns out a decently impressive dive.

The score, through three divers:

Next up, the wild card of the bunch, Rory Bushfield.

On paper, having an Olympic skier in a diving competition seems a bit unfair, but who knows, maybe his sport doesn’t translate well. As Rory says, in skiing, “You’re not supposed to land on your head.”

Well, in other ways, it most certainly does, because this man fearlessly struts up to the 10-meter diving board (the first to do so in the competition), flashes the thumbs-up to the camera, and then does a two-and-a half double-back triple-axel quadruple Salchow 540 Indy Nosebone.

This competition isn’t fair. He’s already insane and is used to contorting his body and falling on surfaces much less forgiving than water. This is officially his competition to lose. Poor Katherine. Poor Louie.

Walking out in his Laker purple and gold, while a personalized “Skyhook” song plays in the background, he looks confident. Everyone around him is rooting him on, especially his co-competitor/probable cyborg Drake Bell.

And then, the dive:

Afterward, one of the judges, this guy David who’s seen Magnolia one too many times …

… explains to Kareem how to tuck in his legs, and we approach the crucial elimination round. Who will be in THE DIVE-OFF?

With Kareem and Rory both safe, it comes down to this, also known as the greatest moment of Louie Anderson’s life:

After both perform flawed-but-not-horrible dives, it comes down to the judges. What was the difference, beyond the fact that ABC wants Katherine Webb on this show for as many episodes as possible?

Keshia, assuring a good dive, went from the same height level. Katherine, on the other hand, went up two levels, which in the judges’ eyes shows a level of courage and bravery.

Knowing her reality-show track record, I’m shocked, but she ran into the force of nature that is Miss Alabama USA 2012.

Rock Memoir Book Club: Kenny Rogers's Luck or Something Like It Gambles With Your Patience