Rock Memoir Book Club: Kenny Rogers’s Luck or Something Like It Gambles With Your Patience 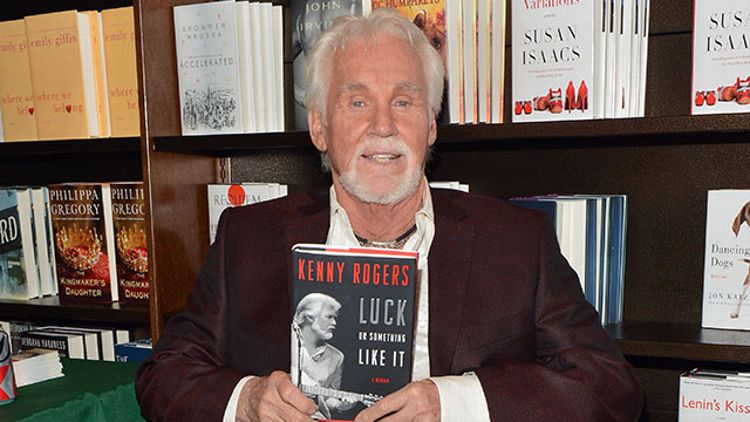 In this installment of Rock Memoir Book Club, we discuss Luck or Something Like It by Kenny Rogers.

Discussion question no. 1: Who is Kenny Rogers?

I don’t mean in the philosophical, “Who is anybody, really?” sense. I mean, I have no idea who Kenny Rogers is after reading Kenny Rogers’s book. Luck or Something Like It is one of those rock-star memoirs — like Neil Young’s similarly rambling, content-free Waging Heavy Peace — that seeks to re-create the experience of listening to the subject speak amiably about nothing in particular for several hours. Luck is a pleasant-enough read, but don’t expect any insight into what truly makes the Gambler hold ’em and/or fold ’em.

Believe it or not, Kenny Rogers is actually a pretty interesting person if you focus on the right things. Consider the autobiographical details that Luck skims over: He was born dirt-poor in the Houston projects. He got a girl pregnant when he was 19. He’s been married five times. He hung out with Elvis, the Beatles, Michael Jackson, and Bubbles the chimp. His face has appeared on millions upon millions of buckets of chicken. He’s one of the best-selling recording artists ever, and didn’t become a superstar until he was almost 40. Few artists have been as canny (or craven) about adopting and dropping various pop-star guises as they moved in and out of fashion. Kenny Rogers is the unholy hybrid of Conway Twitty, Engelbert Humperdinck, Colonel Sanders, Madonna, and Santa Claus.

Instead of going long on any of these topics, Kenny Rogers devotes eight consecutive pages in the book’s latter half to his tennis game. He writes several more pages about the renovations made to his sprawling Georgia home, and still more pages on his celebrity photography. This isn’t a memoir, it’s a curriculum vitae.

Follow-up question: In the final third of Luck or Something Like It, the book transitions from show-business reminiscing to a recollection of Kenny Rogers’s favorite hobbies. Is this meant to mirror the transition from Rogers’s ersatz psych-country group the First Edition to his mid-’70s countrypolitan persona?

Discussion question no. 2: If this Kenny Rogers book isn’t all that insightful on Kenny Rogers, what’s it good for? How are its doorstop capabilities?

Not great, actually. It’s only about 280 pages, so the door would have to be very, very light. However, I do think Luck or Something Like It is a mildly interesting look at the “square” media of the ’60s, ’70s, and ’80s. If you’re wondering what was going on elsewhere in music at the height of flower power, punk, disco, and American indie, the answer can be found in this book: Basically, “elsewhere” involves a lot of ridiculously popular story-song ballads and Lionel Richie collaborations. Rogers isn’t always self-aware in this regard — he describes the First Edition’s kitschy 1968 hit “Just Dropped In (to See What Condition My Condition Was In)” as being “unlike anything the record business, or radio, had ever heard.” (The song was released two years after Pet Sounds, one year after Sgt. Pepper and Are You Experienced?, and the same year as this.)

Follow-up question: Kenny Rogers’s breakout solo hit “Lucille” was released the same month as the second Ramones album. Do these things have anything else in common?

Discussion question no. 3: What is the most decadent part of this book?

If Kenny was having three-ways with Dolly Parton and Dottie West while smoking blunts fatter than Kris Kristofferson’s beard with Willie Nelson backstage at the 1979 CMAs, he opted to whitewash that part of his life in Luck. Rogers takes great pains to present himself as a man who hardly ever drank or drugged to excess (due to his daddy’s negative example), and confined his pursuits of carnal pleasure to the confines of his many marriages. That is, except for a brief swingin’ single period in the mid-’90s when Rogers established a secret phone number set aside for sexy chats with frisky ladies from the Dallas nightlife scene:

Unfortunately, those classy and upstanding phone-sex messages were leaked to the National Enquirer, because recordings of Kenny Rogers talking dirty want to be free.

Follow-up question: If you could hear Kenny Rogers speak in explicit detail about any sexual act, which sexual act would it be?

Discussion question no. 4: What about the time Kenny Rogers did mushrooms?

Some of the most entertaining anecdotes in Luck involve the great Texas songwriter/eccentric Mickey Newbury (who wrote “Just Dropped In,” among many other songs), like the time he corralled Kenny into trying psilocybin and ended up listening to the Cat Stevens song “Sad Lisa” for about 20 hours:

For eight hours it was magical. I could hear every instrument on that song, and I fell in love with it. We took a pause, then listened for another eight hours. During that period of time, I found myself beginning to really dislike “Sad Lisa.” We then sat and listened to it for a few more hours. The whole experience scared me to death. That’s why I never did the drug again.

Discussion question no. 5: What pearl of wisdom will you take from this book?

Kenny Rogers on the Tao of entourages: “Thinkers need doers, just like doers need thinkers. I was a thinker, so I needed doers. I can’t ‘do’ anything but sing, as my mom used to say.”

Follow-up question: What are your top five favorite Kenny Rogers thoughts of all time?

Coming up: Rex Brown’s Official Truth, Proof 101: The Inside Story of Pantera