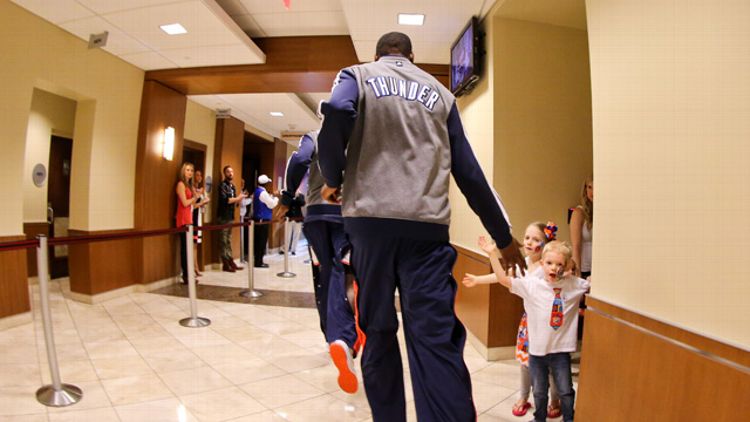 OK, let’s acknowledge this up front: When Russell Westbrook got hurt, everyone agreed it almost certainly killed OKC’s title chances. They probably wouldn’t even make it to the conference finals, we thought. Fast-forward two weeks, they go down in the Western semis, and suddenly people are criticizing Kevin Durant, second-guessing Sam Presti, and calling for Scott Brooks’s job. It’s ridiculous, yes.

And yet … Even if the title window isn’t closing as long as Durant and Westbrook are there, shouldn’t it matter that the best young team we’ve seen since the Kobe-Shaq Lakers blew the doors off the West and went to the NBA Finals last year, and then came back and got worse? That happened, right? Even with Westbrook, this Grizzlies team would’ve given Oklahoma City problems, ditto for the Spurs, and the Heat would’ve destroyed them if they had gotten that far. Their regular-season numbers were great, but I tend to be on Team Marc Stein here: “The regular season didn’t expose OKC but the playoffs would have.”

As an outsider who’s been rooting for them to take over the league for the past three years, this is pretty depressing. Because it was all happening. Everything clicked in last year’s playoffs. They were so good and so much fun that you could sit down any sports fan, make him watch the Thunder, and have him walk away obsessed. By the end of the Western Conference finals, we’d Photoshopped Russell Westbrook onto a fucking unicorn, and I swear it made sense at the time.

Everyone was eating pizza rolls, and it was great.

Then the Finals happened, the Thunder lost, the front office decided James Harden was worth $54 million but not $60 million, decided Scott Brooks and Kendrick Perkins were both worth keeping (not in that order), and … here we are. I will hate what happened to the Thunder for at least the next 10 years.

Some of the decisions the front office made were more defensible than others, but none of it matters. It’s all ended with a team that’s not as great as it should be.

It was painful watching Durant get swallowed up by Memphis last night, but it was even worse seeing his lifeless teammates and then thinking back to the Grizzlies-Thunder series in 2011. Compare the box score from that series-ending loss in 2011 to the box score from last night, and just look at the Thunder roster. In three years the Thunder bench has swapped Eric Maynor, Daequan Cook, and James Harden for Hasheem Thabeet, Kevin Martin, and Reggie Jackson. From three perfect young role players to … something not quite as great. Meanwhile, their starting center would be amnestied tomorrow if OKC had any other backup plan, and the coach hasn’t gotten any better or more creative since 2010.

Big picture? They’ve got Durant, Westbrook, and Serge Ibaka. Everything else is more underwhelming than anyone would’ve thought possible two years ago.

Even bigger picture? This team left Seattle and set off a chain reaction in two cities that still isn’t resolved. We overlooked it because they turned into the most exciting, addictive roster in the NBA. Since then, the owner who moved them has refused to pay the luxury tax because he doesn’t want to risk profits, even as his team’s value has almost certainly appreciated by hundreds of millions of dollars. And so a team that seemed too good to be true 12 months ago has been stripped to its bare essentials.

If anything, Westbrook’s injury has distracted people from OKC issues that are depressing with or without Russ. Harden wouldn’t have saved OKC this year, no, but that’s not the point. With or without Harden, the team’s supporting cast has gotten worse and it’s not clear how they’re going to get better. They could amnesty Perkins, but it’d be one summer too late. They already traded the best shooting guard in the NBA for what might really, unbelievably, turn out to be nothing. Beyond that, the role players were all badly outplayed by Memphis’s supporting cast, and even Houston’s to some degree, and their coach isn’t the right fit anymore (this was obvious even in last year’s Finals).

The Thunder will be title contenders as long as Westbrook and Durant are around, but the pressure’s only going to get worse from here; both will be asked to do more and more with less. In two years Sam Presti and the OKC management have taken what seemed like an endless reservoir of potential and drained it away to leave us with something cheaper, not as good as it should be, and nowhere near as fun. All while Clay Bennett continues to make ungodly annual profits on a team that was bought for $350 million and could probably sell for at least $500 million tomorrow. This is what I couldn’t stop thinking about while OKC’s season faded to black Wednesday.

Biggest picture? Last year, the Thunder were the team you could point to if you wanted to make someone fall in love with the NBA.

This year, the Thunder turned into a team that embodies everything that should make someone cynical about loving the NBA.

We Went There: Grand Central Station's Rumble on the Rails

CourtVision: The Other Warriors