CourtVision: The Other Warriors 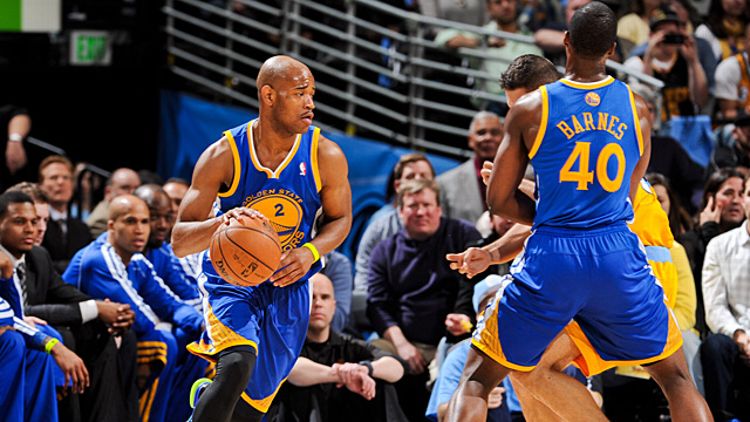 The other night in San Antonio, the Spurs “regained control” of their series with the upstart Golden State Warriors. Their winning formula was familiar: Tim Duncan and Tony Parker led the team in field goal attempts, while Manu Ginobili, Kawhi Leonard, and Danny Green each provided valuable supplements. The Spurs have a clear hierarchy of talent and leadership that generally manifests into a predictably similar order on the stat sheet.

The current Warriors hierarchy is in a bit of disarray. Although these playoffs have undeniably improved the reputations of Stephen Curry and Klay Thompson, in Game 5 it was Harrison Barnes and Jarrett Jack leading the Warriors in field goal attempts, while Curry and Thompson were off somewhere in the basement of the Alamo.

Poorly timed injuries to David Lee and Steph Curry have forced Mark Jackson and his staff to experiment with different lineups and different ways to score. As a result, Jack and Barnes are seeing elevated roles within the team’s offense, and in turn NBA fans are witnessing them emerge in two very different ways.

The Warriors acquired Jack in one of those under-the-radar summertime transactions that many of us fail to even notice. But, for NBA nerds — especially those of us infatuated with shooting — Jack has always been noteworthy. Last season in New Orleans he averaged 15.6 points and 6.3 assists per game, which are more than respectable point guard numbers. But sizing up NBA talent from that good ol’ points-and-assists plateau often obscures any kind of insight.

He is unique because he has the ability to score effectively in areas where many of his peers struggle. Jack may not be the biggest or the most athletic guy in the league, but he finds ways to create his own opportunities. And he’s extremely effective at converting these opportunities, especially in the midrange.

Out of the 29 players with at least 400 midrange shot attempts this season, Jack ranks first among guards in field goal percentage. Jack made 47 percent of his midrange shots this season, ahead of other qualifying players including Dirk Nowitzki, Kevin Durant, and his teammate Steph Curry, who made 43 percent. Even as a backup, Jack accumulates impressive amounts of volume in the midrange, and more than justifies it with his efficiency. He loves shooting in front of the basket near the free throw line, or around the elbows. He rarely shoots along the baseline, unless he’s a taking a corner 3. His regular-season shot chart reveals just how good he is in the midrange: 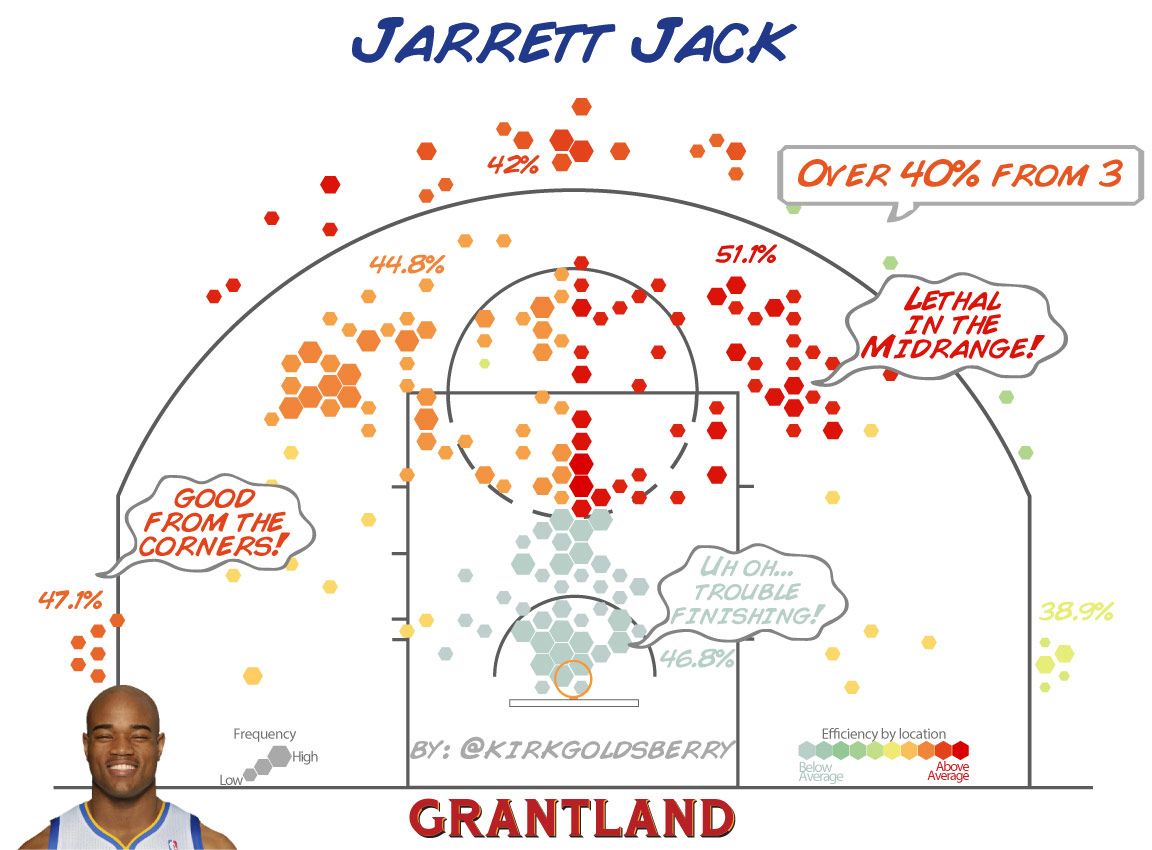 During the playoffs, both Jack’s minutes and his shooting activity are up. His team is relying on him in a time of need, and so far he’s been responding. During the regular season he made about 45 percent of his 10.8 shots per game; so far this postseason he’s hitting over 50 percent of his 12.9 shots per game. Unfortunately for Golden State, Jack can only do so much — take Game 5, for example, in which he played very well and the team lost by 18.

Jack’s performance this postseason guarantees him a raise heading into this offseason, when he’s sure to be a highly sought-after free agent. In fact, tonight may be Jack’s last game as a Warrior.

As a scorer, Barnes is best when he’s attacking the basket or chucking from behind the arc, and at his worst when he’s shooting midrange jumpers. During the regular season, Barnes made less than 30 percent of his midrange shots but demonstrated that he’s a capable attacker and a decent 3-point threat: 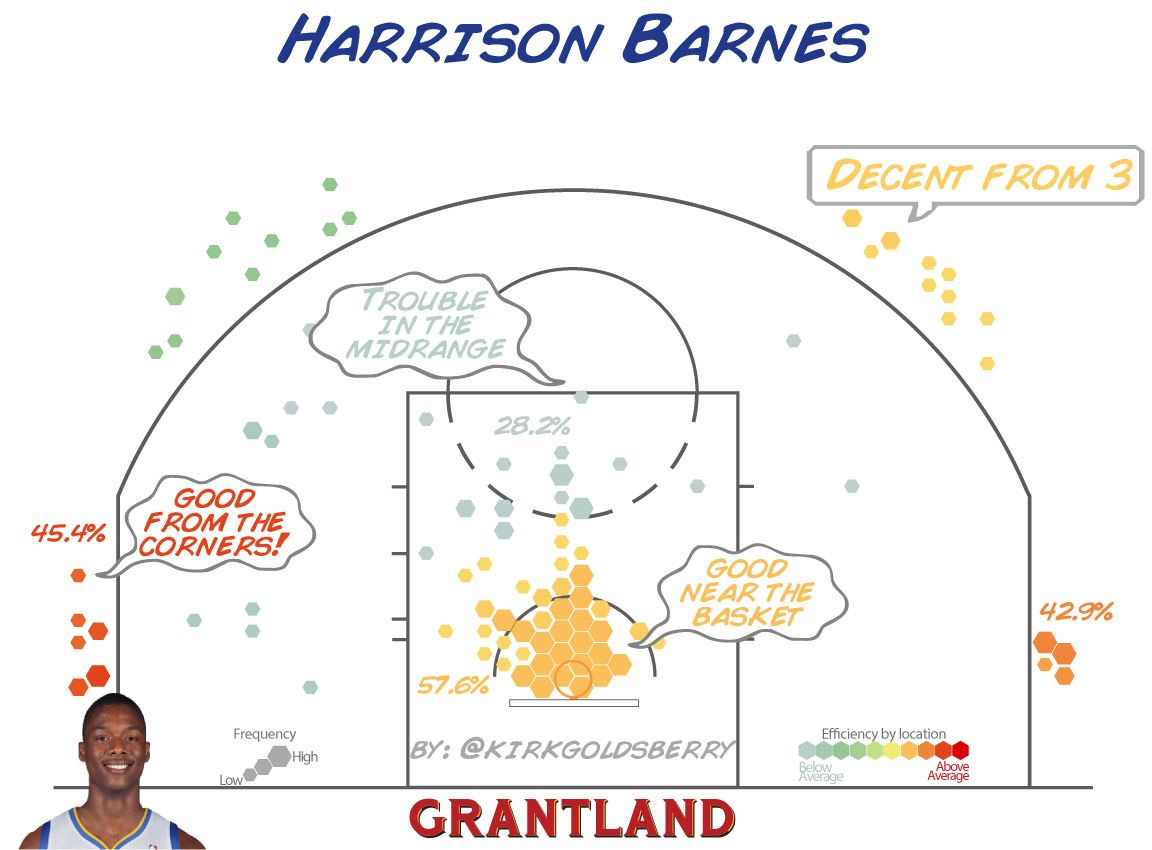 The obvious thing to consider about Barnes is that he’s only 20, and his game is sure to improve across the board. But even now it’s really impressive to see him performing well this deep into the playoffs, a time when most rookies are either buried on the bench or already preparing for next season. Barnes has tremendous upside, especially as a solid defender and as a small-ball attacking forward who can create mismatches against most NBA teams.

As we await Game 6, we know two things: First, it’s indisputable that Jack and Barnes have stepped up nicely, proving that they are both capable NBA scorers. But secondly, as Game 5 demonstrated, neither is good enough right now to unseat the Spurs without significant help from their friends. Make no mistake, if the Warriors make the leap over the next two games it will be partially due to contributions from Jack and Barnes, but it will also be because of a much-needed resurrection of Curry and Thompson.

About Last Night: Warriors Go Gentle Into That Good Night