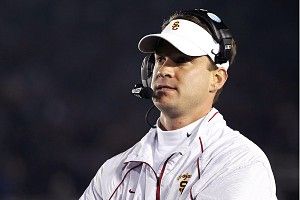 The inevitable poaching of players from a sanction-riddled Penn State program was bound to give a glimpse into the heartlessness of college football. Left in the wake of the greatest scandal in the history of college sports is a collection of 20-year-olds forced to reconcile the sacrifices they made and the identities they built at the feet of a fallen idol. And on their heels are coaches from programs around the country, all of whom see opportunity, no matter how it came about.

There’s something that doesn’t sit right about it, and that’s why the reaction makes sense. Penn State coach Bill O’Brien said Thursday that every one of his players has been contacted by another program, but still, his star running back and the man recruiting him have received most of the attention. Unsavory as it feels to most, this scavenging needs a singular object of scorn, and it’s been given a familiar one.

My question is how deserved this latest run as college football crook really is. The irony of the situation isn’t lost here. Kiffin’s arrival to USC was quickly followed up with a two-year bowl ban and plane rides and phone calls from coaches trying to pick off the best of the Trojans’ roster. Four months ago, I sat in Kiffin’s office, and as I asked him about his star quarterback, the frustration from those early days at USC was still evident. “It was free agency in college football, “ Kiffin said. O’Brien has used the same phrase this week.

The problem some have is that Kiffin should know better, that no one knows more than he does about being forced to re-recruit a program’s own players. But that type of responsibility is an unfair thing to ask. Coaches from around the country are flocking to State College in an effort to make up for previous misses, and that Kiffin was once put through the same thing shouldn’t mean he loses out on that same chance. Even the notion that the situations are similar is unfounded. Players were able to leave USC because one player got paid. Players are able to leave Penn State because of a systematic and university-wide cover-up of a scandal of such horror that it is bound to follow the program and the school forever. For this current group of Penn State players, every game will be a referendum on whether it should be played.

The topic of recruiting Penn State players has been a recurring theme at Big Ten Media Days. Urban Meyer pleaded enough ignorance to acquit himself when he inevitably does it. Bret Bielema and his Midwestern values are steadfast against. Purdue coach Danny Hope is the only one willing to tell it like it is: “For us not to compete would be a disadvantage for our football program. Whether anything materializes out of it, I don’t know. If they’re available, we’re interested.”

So is Kiffin, and so he should be. The job Kiffin has done rebuilding USC in the time he’s done it is one that seemed impossible two years ago, and that success is likely rooted in an understanding of the heartless world of today’s recruiting. Kiffin was asked earlier this week whether he would provide counsel to O’Brien if the Penn State coach reached out. Much has been made about how Kiffin answered in the affirmative … and then spent much of that same day lobbying for Redd from the Pac-12 Media Days podium. The thing is, O’Brien should be asking Kiffin for advice. The turnaround in Troy is the product of a man who knows the system better than those he’s competing against. Lane Kiffin has thrived as a college coach because he’s good at being one, and trying to add one final piece to a championship-caliber team is no different.

The Other Guys on MLB's Trading Block

Why I Won't Be Watching Olympic Boxing