Why I Won’t Be Watching Olympic Boxing 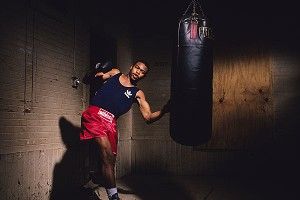 You love basketball. It’s your favorite sport. So you turn on your television next week to check out some Olympic hoops, eager to watch LeBron, Kobe, and 10 of their really tall, athletic friends do awe-inspiring tall-athletic-guy things. But from the opening tip, you discover this isn’t the game you love. And it’s not just that the lane is shaped like an elongated Chunky bar or that a pivot counts as a step. You notice that there’s no dunking allowed. There’s also no 3-point line. And every so often, a shot will clank off the iron and the refs will arbitrarily deem it a successful basket.

I love all things boxing. I spend some 300 hours a year watching the sport, everything from the most expensive and glamorous of pay-per-views to the cheapest and grimiest of midnight Telefutura scraps. But over the next two weeks, I have no intention of watching any Olympic boxing. I will not watch because this version of the sport is no more boxing than the game described above is basketball.

Olympic boxing, in its current form, is the unwatchable result of an overreaction to a singular atrocity from 24 years ago. It’s boxing for people who don’t much care for boxing and the violence inherent in it — but who perhaps delight in watching fencing or celebrity dance competitions.

If your youth coincided with the 1976 Olympics that saw Sugar Ray Leonard, Howard Davis, and the Spinks brothers take Montreal by storm, or with the ’84 Games in Los Angeles, when the American team won nine of a possible 12 gold medals, you remember boxing as one of the most visible and popular Olympic sports, trailing only gymnastics and track and field. You also remember highly entertaining Olympic fights that resembled world-class professional boxing, such as this. (What a trip, by the way, to hear the broadcaster say that Michael Spinks “isn’t considered by the Americans to be quite as useful as his brother Leon.”)

How, then, did Olympic boxing devolve into a crime against aesthetics such as this?

To be more precise, Jones was the victim of a robbery at the ’88 Games in Seoul that was so reprehensible it led to a reinvention of the sport. Jones dominated Korean Park Si-Hun to such an obvious extent that after the judges gave the hometown fighter the decision, silver medalist Jones was still awarded the Val Barker Cup as the outstanding boxer of the Olympiad. But it was the former decision that resonated with the public, not the latter attempt at a makeup call. Boxing judging is so subjective and, as of 1988, there was so little accountability attached to how a judge scored a round, that the system was overhauled to, theoretically, take the human element out of it. In came “computerized scoring.”

“Computers” were merely messengers for a system that was still operated by humans — and highly corruptible humans at that. Rather than judges deciding at round’s end which boxer won the round, they instead became punch counters. Up through ’08, here’s how it worked: Five judges were seated at ringside with two-button video-game controllers in their hands, and when at least three of the five judges pushed their buttons within one second of each other, a fighter was awarded a point. So instead of a judge being able to fix a decision by voting for the inferior fighter, his fingers could conveniently move just a hair too slow when the superior fighter landed. Four years ago, I was left screaming at my television set when American Raynell Williams controlled all four rounds against France’s Khedafi Djelkhir, appeared to land twice as many clean shots as his opponent, and went on to lose 9-7. Williams probably landed some 40 or 50 punches in the eight minutes the match lasted. Exactly seven times, those punches registered with three of the five judges within the one-second window. And this wasn’t an anomaly. Every single day at the Beijing Olympics, there were at least three or four fights with outcomes that made the Tim Bradley–Manny Pacquiao decision look sensible by comparison.

For the boxing competition that begins this Saturday in London, the scoring system is being tweaked. The five judges still push their buttons, but instead of the within-one-second constraint, each judge’s punch counts are totaled at the end of the round, and from there it gets really confusing. I’ll let the Olympic News Service release attempt to explain it, so strap on your John Nash brain and try to follow along:

After each round, the results of the individual scores are calculated separately for each boxer. Each boxer receives a score for each round based on either the similar score of the three judges which are closest together or an average of three of the five judges’ individual scores (discounting the highest and lowest scores).

To determine which of the three judges’ scores to take into account, there are two methods:

Similar score — the individual scores of the three judges which are closest to each other are taken into account. So, if the five individual scores are 2, 2, 2, 5, 6, the three scores closest to each other are 2, 2, 2. An average of these scores is then taken (2+2+2 divided by three), meaning this particular boxer would be awarded two points for the round.

Trimmed mean system — if the judges’ scores are, for example, 2, 4, 6, 8, 10, then it is impossible to determine which three scores are closest. The highest and lowest individual scores are removed, leaving the three middle scores. An average of these scores is then taken (4+6+8 divided by three) to give the boxer’s score for the round.

It’s probably going to be incrementally more difficult for a single biased and/or inept judge to influence the outcome. Still, the wrong guy’s hand being raised is only a small part of why Olympic boxing is an affront to the senses. The bigger issue is that the punch-counting system has led to a mutated style of boxing that is suited toward landing single punches with no regard for the effectiveness of the punch. Why throw a five-punch combination if the most you can expect from the judges is one point for it? You may as well thrust out a quick jab to the forehead and then get the hell out of the way.

And to the detriment of all viewers, the boxers and their corners know exactly where they stand on the scorecards between rounds. If the countless hours I wasted watching Olympic boxing in 2000, 2004, and 2008 are any indication, when a boxer knows he’s ahead entering the final round, we can all sit back and enjoy an artful display of running, clinching, pot-shotting, and more clinching as that boxer drains the clock to protect his lead.

Prior to the ’08 Games, Ray Leonard told me, “If I was fighting when they implemented these scoring systems, you wouldn’t be talking to me now — I wouldn’t be a gold-medal winner.” The numbers back him up. In ’88, the last Olympics before “computerized scoring,” Americans won three gold medals and three silvers. In the five Olympiads since, Americans have won a total of three gold medals and three silvers. Not that Americans have to triumph in order to validate Olympic boxing, but Olympic success and pro success simply aren’t linked anymore. Case in point: Floyd Mayweather, his era’s Leonard from a skills perspective, had to settle for the bronze in ’96. And check out the list of medalists from the ’08 Games. Even hardcore fight fans would struggle to find more than three names that have caused so much as a minor ripple in the pros out of the 44 men who scaled the podium in Beijing. And zero of those 44 have won a “world” title in the first four years of their professional careers — a shocking statistic given the proliferation of “championship” belts in the pro game.

Nothing against this year’s fine athletes who’ll be trying to win gold in London; it would be a compelling story if flyweight Rau’shee Warren can finally prevail in his third try at the Olympics, and if any American can win gold he’ll get something resembling the David Reid treatment and it will help launch his pro career. But I have better things to do than watch the “drama” unfold. For example, I haven’t reorganized my record collection autobiographically in a while.

To backtrack ever so slightly on my premise, I admit that there’s a likelihood that I’ll watch at least one women’s boxing match from London, on account of it being a new Olympic sport and, hey, there’s always room for novelty. But once I see those spurious points start adding up and then the female fighter with the two-point edge that she doesn’t deserve begins turning the ring into her own personal short-track rink, I’m out.

The sad truth is that we watch certain things out of habit, and sometimes out of hope. I hung around for two seasons too many of True Blood after I knew with certainty that I hated the show. I finally drew the line before the current season began. The same goes for Olympic boxing, which unlike True Blood, doesn’t even have nude scenes to keep us peripherally interested.

There’s talk that in 2016, the “computerized” system will be scrapped and something similar to what was used up through ’88 will be implemented. If and when that happens, I’ll be glad to immerse myself in amateur boxing for a fortnight. But until then, until Olympic boxing again vaguely resembles actual boxing, there’s absolutely no reason for a fight fan to tune in.