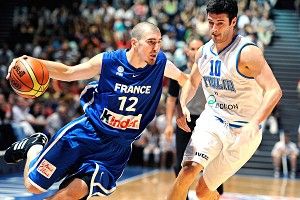 Heading into the basketball competition of these Olympics, there are several teams that are a threat to medal, and maybe even contend with Team USA. As the Games ramp up, we’ll be providing looks at the strengths, weaknesses, and chances of these possible contenders.

Much like Spain, France features a team full of NBA pros and familiar names. Although they lost to Spain in the finals of EuroBasket last season, France had a fantastic run in that tournament that allowed them to qualify for these Olympic Games, where they should be a threat to win another medal.

Offensive Style: Misdirection/Screens Off the Ball

France is a team that loves to play team basketball. Sure, they let Tony Parker work off of ball screens from time to time, but what makes the French National Team so much fun to watch is the way they ping the basketball around the court to find the open man. One set they run to get the ball into the post is a perfect example of this style of play. 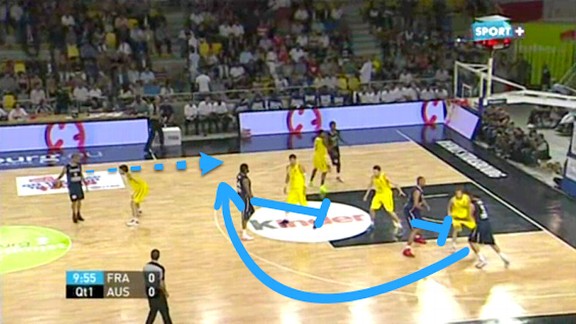 The play starts with the point guard, in this case Tony Parker, bringing the ball up the court. As he crosses half court, the two big men for France — Ronny Turiaf and Boris Diaw — set a staggered pin-down screen for Nicolas Batum. Batum comes off those two screens and executes a loop action, curling around both and moving to the opposite side of the court. Once Batum gets to the wing, Parker hits him with the pass. 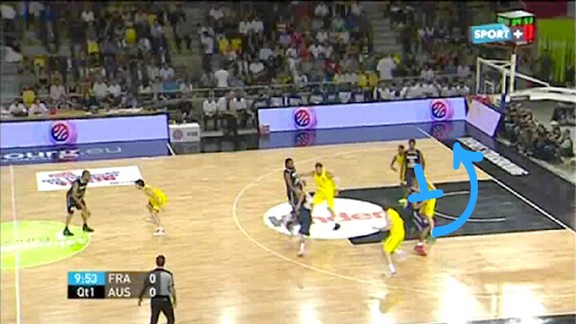 As that’s happening, Mickael Gelabale, who started the play in the corner, comes on a straight line and sets a screen for Diaw. The timing of the play works so Gelabale sets his screen as soon as Batum comes off Diaw’s. This is your basic screen-the-screener action, and it’s designed to get the basketball to the post. 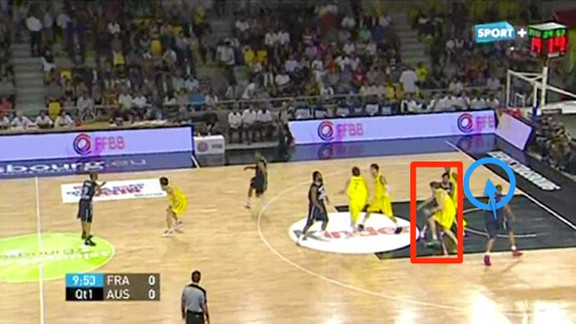 The reason this action works is that it takes Diaw’s man and sets him up for the cross screen. Because Diaw’s man needs to show a little bit as Batum uses the screen, he’s put in a position to get hit by Gelabale. 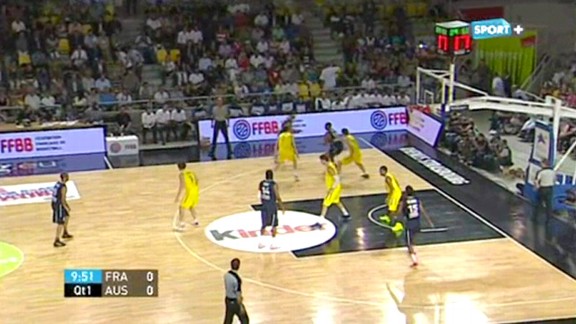 This results in Diaw getting the ball with his back to the basket and France playing off him. In this case, Batum cuts, and Diaw hits him with a shovel pass for the easy dunk. Here is the play in real time:

What I like about this set is that there is so much movement, it’s hard for the defense to keep track. There are the staggered pin-downs, the cross screen, and the post entry pass, all of which are direct threats. The moment the defense slips (in this case, by not following Batum on his cut), France is able to take advantage. Here are a few more looks at this set.

Another reason I like this set, especially against Team USA, is that it sets up a natural high-low passing situation. When Team USA goes small, LeBron James/Carmelo Anthony are usually forced to defend post players, and when they do, they end up fronting the post. This set leaves a big man at the high post, and the pass it sets up is very effective when the low-post man is being fronted.

Despite all the familiar names on this French team, the key player for this squad may be one you’ve never heard of. Nando de Colo, who is property of the San Antonio Spurs and is coming over to the NBA this season, is the man to watch for France. He is very comfortable with the ball, and at his size, that makes him very tough to defend when he works off ball screens.

Colo’s comfort with the ball allows him to play off what the defense gives. If the defense is showing too hard on a screen, he’ll go away from it. If they go under the screen, he’ll pull up for a jump shot. He can also get to and finish at the rim.

Colo can also knock down spot-up jumpers from the wing, a necessity when playing with a point guard like Parker and big men who can pass like Turiaf and Diaw.

During the lead-up to the Olympics, Colo has shown an ability to find the open space, especially in the corner, and comfortably hit those jump shots. Combine this with his pick-and-roll play and he’s a major threat on the offensive end.

Pretender. Even though I think that France has a very good chance to get to the medal podium, I don’t think they are good enough to beat Team USA. I like their guards and wings, but their bigs are their weakness. Kevin Seraphin, Ronny Turiaf, and Boris Diaw are all very good, but they aren’t big enough to make Team USA pay for going small. That’s where I think France will struggle against Team USA.

Why I Won't Be Watching Olympic Boxing