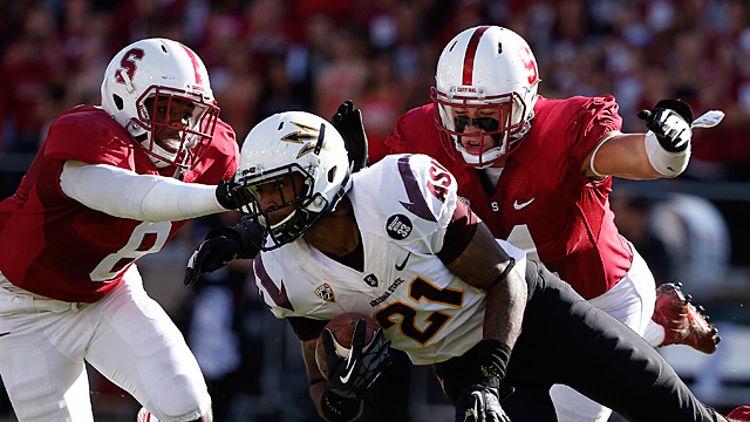 Many rightly fawn over the accuracy of the betting market. It’s the stuff that memes like “Vegas knows” are made of. But the “boys in the desert” exceeded even the most outsize expectations this week in college football, with the point spread favorite winning 55 of 57 games. Las Vegas was right picking the winner 55 times, and wrong only twice.

No matter how good Vegas is at picking winners, the betting public is still willing to lay the points. Professionals bet numbers; the public bets teams. And the typical bettor can’t help but back the better (or, at least, favored) team. Even with an average spread of -19, CFB favorites this week covered 63 percent of games. When favorites win, so do the bettors.

I must admit to being suspicious that some of the sportsbook bosses referenced their thesauruses in an effort to explain the pain of so many college football favorites covering this week — words like “dreadful,” “gruesome,” and “horrendous” popped up. Jay Kornegay from the LVH told me: “We lost every major decision — the sharps, public, and in-house players all won. Our biggest action was on Stanford–Arizona State. Stanford covering was like a punch to the ribs.”

The Wynn’s Johnny Avello told me on ESPN Radio in Las Vegas: “If Michigan, LSU, and Florida would have covered, it could have taken us the whole season to win back the loss.”

When it came to the weekend’s NFL games, Vegas was a bit more upbeat; the action was robust with players pressing their CFB winnings. The three most lopsided bet games, according to the ticket count tool at Pregame.com, were the Vikings, Giants, and Packers. All three were losers for bettors. The sportsbooks reported unanimously that the Green Bay–Cincinnati game was their biggest win (with the Pack garnering 85 perecent of the game’s action at Bovada).

Sunday night’s cover by the Bears was the lone bright spot for the average bettor. Mike Perry from Sportsbook.ag called Chicago’s win a “bailout for bettors after getting crushed.” It’s telling to note that bettors bet more Sunday after winning the day before, and then bet even more Sunday night as a response to losing earlier in the day.

Indy’s upset of San Francisco was the first double-digit NFL underdog to win a game in more than a calendar year. Kornegay mentioned a significant amount of sharp action on the Colts money line — which paid upward of +400. William Hill reported the most sharp action on San Diego, Baltimore, and St. Louis, with LVH adding Tampa Bay and the Giants to the list — making Wiseguys 1-3-1 ATS on the day (after going 0-3 last week).

And then came Monday Night Football. The game opened with Denver favored by more than two touchdowns, and that spread was bet upward throughout the week. When Oakland scored late to cut the lead to 16, it was the worst possible outcome for the sportsbooks. The 16-point final margin meant the bettors “middled” the bookies — cashing on both the favorite and the underdog. Every longtime grinder can’t help but smile when that happens.

Looking ahead, New England travels to Atlanta next week, and the Broncos-Eagles total of 58 is the second-highest NFL over/under since 2004. BetOnline.ag’s Dave Mason speculates that “with last weekend’s results fresh in their minds, bettors will fire on hot teams like the Colts and Seahawks as they travel to teams coming off losses.” I’ll be back next week to tell you the truth about what happened over the weekend in Las Vegas.