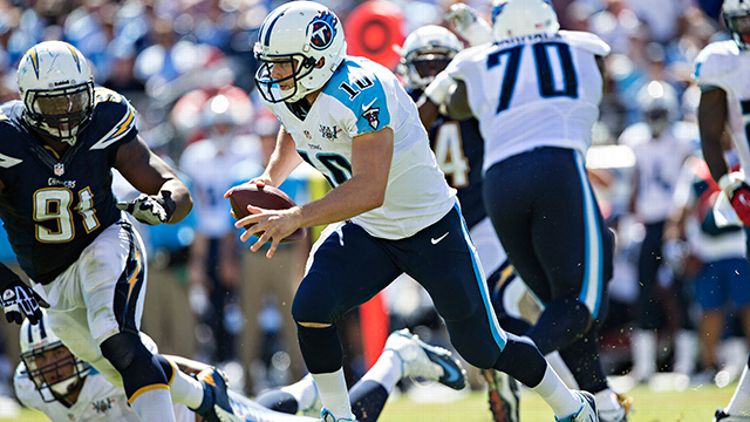 While slow starts around the league have cast aspersions on the possible breakout seasons of several notable quarterbacks, one player whose stock has been rising is Jake Locker. The 2-1 Titans are within an overtime loss of starting 3-0, and Locker helped get them there with a game-winning drive late in the fourth quarter on Sunday to beat the Chargers. It would be reasonable to expect a step forward from Locker in 2013, too: He’s healthy after struggling with injuries throughout his first season as a starter, and the Titans spent heavily this offseason to improve his protection and the running game around him.

So, then, why are his rate statistics the same? No, really, look:

That’s basically the same guy. The figure that table doesn’t include is Locker’s interception rate, which has dropped from 3.5 percent in 2012 to zero in 2013, as Locker has yet to throw a pick in 87 attempts. If Locker is a much-improved player, why isn’t that showing up in his numbers?

To figure that out, I went to the tape. I watched a fair amount of Locker from 2012 during the offseason, and watched the first two Titans games closely when Mays and I adopted them for a week during our podcast last Wednesday. After that, I focused on Locker’s third game against the Chargers and took some clips that I think serve as effective examples of the former Washington star’s strengths and weaknesses. In the process, it’s going to reveal a few misnomers and inconsistencies in how we normally think about player qualities.

Let’s start with the good stuff. Locker’s strengths aren’t very different from the ones you heard about when he was entering the league: his athleticism and his arm strength. That’s not necessarily a knock on his development curve, just an acknowledgment that he’s a freak athlete who has a cannon for an arm, and it’s impossible not to see that when you watch him play. Watch him here, as he escapes a collapsing pocket, sprints out to the sideline to find a passing lane, finds an open receiver, and then drives on his throw to Nate Washington to make sure it gets there in time:

That’s the sort of throw that Locker makes on a routine basis, and it’s every bit as good as the move that Tony Romo or Russell Wilson might make in the same situation. In fact, the difference between Locker and those guys is that Locker’s more of a threat to run and a better athlete when he does so: He had a 39-yard run in this game that saw him accelerate through the second level and past opposing defenders like he was Julio Jones. If you hear somebody say that Locker is “deceptively fast,” that’s inaccurate and likely a race-driven comment. There’s nothing deceptive about it. Locker is fast.

Locker’s arm strength (“arm talent,” if you’re nasty) is also unquestioned, but it manifested itself in ways that you wouldn’t normally expect. When you think about a guy with great arm strength, you envision a pass that travels 40 yards in the air on a rope, like something Aaron Rodgers or Colin Kaepernick can do. Locker’s arm strength is right up there with those guys, but it doesn’t (yet) reveal itself that way. Instead, where Locker’s velocity really shines is on shorter throws. Tennessee’s most successful consistent play against the Chargers was a simple curl to Washington that it ran at least three or four times for easy completions. On those plays, Locker’s throws are crisp, on time, and well located. They arrive so quickly that the defender doesn’t have time to adjust for Washington breaking off his route, which allows Washington to turn upfield and start compiling yards after the catch while the defender is between two minds. Indeed, while Locker had a number of big plays through the air on Sunday, virtually all of them were shorter passes that produced plenty of YAC.

On those deeper throws, Locker really struggled. He was 2-for-11 on throws that traveled 15 yards or more in the air, and while quarterbacks will obviously complete those sorts of passes less frequently, Locker left a number of big plays on the field. In doing so, he almost lost the game. This was the penultimate play of the two-minute drill at the end of the game, the one that occurred before the game-winning bomb to Justin Hunter.

Watching this on the coaches’ film (which was too small to successfully GIF), you can see Locker reading the defense properly and making the throw to the right receiver at the right time. He releases this ball just as the safety falls for the underneath route and as the receiver, Damian Williams, makes his break for the deep post. Cornerback Derek Cox is toast. This should have been the game-winning score, and Locker overthrew it by two yards.

It wasn’t the only deep throw Locker missed on the day, either. Here’s Delanie Walker getting free for a would-be big play on a corner route, only for Locker to again miss on his throw:

And here, later in the game, is Locker missing on the same throw to the opposite side of the field:

The second throw is tougher — there’s less space to work with, and there’s more pressure on Locker — but these are windows that good quarterbacks will hit, more often than not. Locker misses badly on both occasions.

Here’s where an important distinction needs to be made when it comes to discussing quarterbacks. The most useless phrase you’ll hear when people talk about quarterbacks is that a guy “can make all the throws.” The implication is that he has the arm strength to make every throw in the route tree with NFL-caliber velocity. Jake Locker can make all the throws, and he’s got velocity to spare in doing so.

The problem is that a guy who can make all the throws doesn’t necessarily make all the throws. In other words, it’s one thing to have the arm strength to fire off a pass; it’s another to consistently place it in the spot where it needs to be. Those two corner routes are perfect examples of the difference between those different descriptors. Just because Locker has the arm strength to hit this corner route doesn’t mean that he has the accuracy or consistency to nail it when he needs to. That’s the biggest issue with Jake Locker and why there has been a huge disconnect so far between his scouting evaluations and his actual performance on the field.

Locker deserves some credit for leading his team on that two-minute drill for a comeback win, but there’s also some meaning to be wrung out of that by actually watching the possession. The Titans started that drive on their own 6-yard line with 2:05 left and no timeouts while down four points. Because they’re the Chargers and there’s still some Norv in the water there, the Chargers played hyper-conservative zone coverage while trying to keep plays inbounds. Locker mostly made smart decisions, completing his first four passes for a total of 45 yards before firing off a silly checkdown on first down at midfield for four yards, which kept the clock running in the service of an irrelevant gain. On the next play, this happened:

Of course, that play isn’t Locker’s fault, as he hits Delanie Walker in stride over the middle of the field, only for Walker to drop the pass into the arms of Marcus Gilchrist, who then promptly drops the game-winning interception. It’s just funny to consider that, when we start thinking about two-minute drills and who wins games, had Gilchrist held on to this pick, after a week or two passed and the highlights went into storage, we would have looked back and noted that Locker couldn’t come up with a game-winning drive when his team needed him. And now, since he did come up with a play to win the game, we’re instead going to forget that he missed a would-be touchdown on the previous play with a bad overthrow. This two-minute drill and those plays are great examples of where the numbers hide meaningful details about how a player performed. (And let that play also be a reminder of why players who throw zero interceptions in a multi-game stretch regress toward the mean.)

Finally, Locker came back after his miss and hit Hunter for a game-winning touchdown pass from 34 yards out. It was Locker’s best deep ball of the game, but it still wasn’t a perfect throw. It makes sense that the Titans wanted to get a jump ball in with the 6-foot-4 Hunter versus the 6-foot-0 Crezdon Butler, but it’s put in a place where Butler (or the safety) could have possibly made a play on the pass. That was also true of an earlier fade to Kenny Britt, where Britt had to leap over and around Derek Cox to try to catch the ball.

Compare that throw to another recent game-winning touchdown pass, the throw from Jay Cutler to Martellus Bennett that beat the Vikings in Week 2. This was an easier throw because it needed to produce only a 16-yard touchdown pass, but the concept is the same: Put the ball in a place where your receiver, and only your receiver, can make a play on the football. Cutler’s throw is just about perfect: It’s to the back shoulder, a spot where no defender has any prayer of making a play on the pass. Locker’s throw was good enough, but Cutler’s throw is the ideal.

I’ll take away some positives and negatives from my three weeks with Locker. To be honest, I saw more functional accuracy on shorter throws than I was expecting; Locker still misses the occasional easy pass, but so does just about every quarterback. I don’t think his zero interception rate means much of anything, since we saw how lucky he was to avoid one and there has been little change in any of his other rate statistics. What I’ll be watching for is that final step Locker has to make to go from being a promising quarterback to a prosperous one. He needs to stop being the guy who can make all the throws and become the guy who does make all of them.