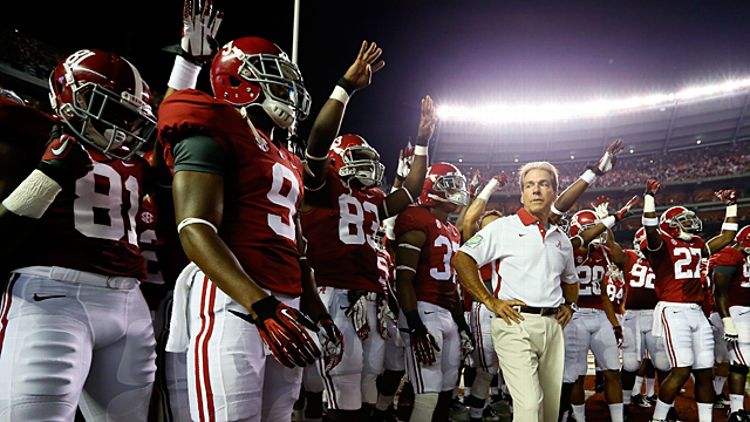 Perhaps the most impressive current Las Vegas stat is that Alabama has been favored in 51 straight games. Wow. The last time the Crimson Tide were underdogs in a college football game was in 2009. Not only has Bama been favored in every game since, but it has been favored by an average of more than three touchdowns per game. In this so-called age of parity, Alabama has dominated.

The combination of historic tradition and recent success typically earns a team strong betting support. Fan bases often bet their team as a matter of habit, while non-fans are drawn to dominant teams. Saturday was no different, with LSU-Alabama generating the biggest betting handle of the day. The LVH’s Jay Kornegay reports that Bama’s cover was the biggest win for football bettors this week, college or pro.

What’s unusual about Alabama is how often it wins money for backers. When a team receives lopsided support week after week, the bookmakers make it increasingly expensive to bet that team. Typically, such point-spread premiums result in ATS underperformance by the most popular teams. Alabama, though, is an exception, covering 62 percent of games during its four-season run as unvaried favorites — without a single season below .500 against the spread. By definition, the spread is expectation; and even with an extreme popularity premium tacked on, Alabama has exceeded expectation.

Overall, the college football weekend was break-even for the sportsbooks. The Golden Nugget’s Aaron Kessler reports that bettors did especially well with parlays this week, with a heavy impact from Alabama, Texas, Auburn, and Missouri covers. The vig associated with parlays is significantly higher than for 11/10 one-team wagers. Sportsbooks know that the average bettor prefers to bet small amounts with a chance to win big amounts, and thus they charge extra commission for this chance. But sometimes, favorite-heavy days leave a square with a pocket full of four-teamers smiling.

Sunday was good for underdogs in the NFL, which meant it was not a good day for the average bettor. Jacksonville, St. Louis, and Carolina not only covered, but also won their games. The majority backing the favorites lost not only their spread bets, but six-point teasers and moneylines also. Sportsbook.ag’s Mike Perry told me that the 49ers/Broncos teaser was “enormously popular” — with the average fan drawn to the approximation that San Francisco and Denver simply needed to win in order to cash. One did win, but the other did not, so the teasers lost. Jacksonville, the biggest upset of the day, paid +550 on the moneyline, while $100 on the Jags, Rams, and Panthers to all win paid $9,500.

The day improved for bettors late, with upward of 80 percent of bets backing Denver’s cover. The favorite and over once again cashed on Sunday Night Football. That is by far the most popular parlay for standalone prime-time games. Mathematically, the favorite and over should cash only one out of four times — but has actually hit four of the last five weeks on SNF. Myopic bookmakers scowl at such luck, while the more savvy bookies understand that lucky runs are what keep a losing bettor coming back for more.

Looking ahead to next weekend, New Orleans hosting San Francisco is expected to generate huge action. BetOnline.ag’s Dave Mason notes that 88 percent of the money so far backs the Saints. He speculates that if San Fran had won on Sunday, the split would be much closer to 50/50. The public’s emphasis on what it has seen mostly recently is that strong. Bovada.lv’s Kevin Bradley wonders if all the underdog covers may slow down favorite betting. We will certainly get a chance to find out, with Alabama, Florida State, and Ohio State favored by a combined 98 points, and with Denver -8 hosting Kansas City — the first time in at least 25 years that a 9-0 or better NFL team has been an underdog.