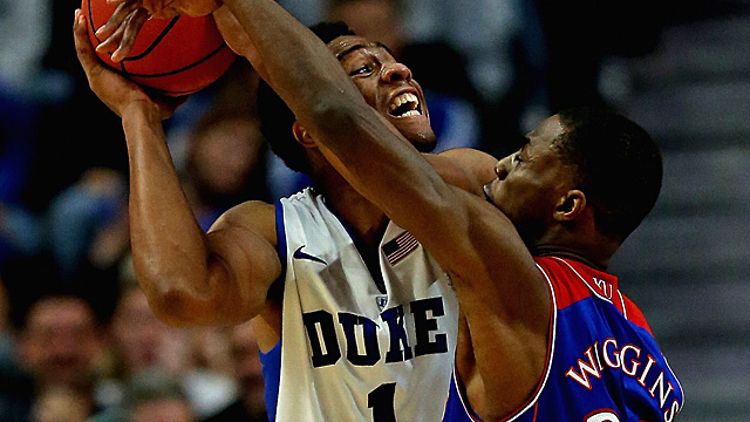 If we’re going off StubHub, which is the objective arbiter of all things hype, last night’s Champions Classic was one of the most anticipated basketball showcases in recent history. So while the basketball turned out so good that people seem to be overlooking the fact that the games were choppy whistle bonanzas, I was there for more anthropological reasons. To Chicago:

West End was one in, one out by 4 p.m., so I can only speculate on what was going on at the jammed destination sports bar. I did witness a Michigan State fan puke in front of the main bar at the Ashland location of the Billy Goat Tavern at 5:50 p.m., about 40 minutes before the Spartans and Wildcats tipped off. But space was simply too valuable inside the bar, and I witnessed bros, after a moment of hesitation, immediately readopt the barf fallout zone and bravely continue their drinking.

I’ll get to the general dress code in a moment, but I want to establish something first; besides the five to 10 rows of Michigan State students jammed in the upper corner at the United Center, there wasn’t a college student in sight. No, everything about the Champions Classic — the Tuesday-night tip time, the off-site location, the early start time and late end time — catered to alumni. So, lots of replica jerseys pulled over button-downs, lots of blue T-shirts pulled over blouses.

If you had told me some vicious Kansas-on-Kansas crime happened last night, and said a video clip and/or GIF existed to prove it, my mind would not snap immediately to “Xavier Henry and Jeff Withey.” Well, OK, maybe Withey.

1. Michigan State (even though they boogied after the first game)
2. Kansas (don’t even feel conflicted saying they had the most drunks; it was just a fact)
3. Kentucky (winners of the “didn’t have a ton to cheer about” division but screamed BIG BLUE well into the second game)
4. Duke (they all have jobs and have no time for your working-class dreams and wishes)

Song the DJ Kept Queuing Up for Whatever Reason

B.I.G. and Puff Daddy’s “Victory,” which I understand at face value, but it’s kind of a dark song.

“When was the last time you guys won a championship?”

A Kentucky fan to a bunch of Kansas fans who were hanging around too long after the second game.

Was the Handcheck Thing That Bad?

Going into the first game, I had something of a theory: Maybe the referees would let play flow a little more as a way to stem the backlash against the new rule-enforcement guidelines (Seton Hall–Niagara had 73 fouls over the weekend, which makes it hands down the most historically significant Seton Hall–Niagara game of all time). Also, I felt that given the Champions Classic was such a big event, with lots of corporate advertisers, it was unlikely that organizers would let the second game — which was scheduled to begin around 8:30 — tip well after nine.

With that in mind, and a 50-minute delay to the start of Kansas-Duke now a reality, the refs figured, what the hell, let’s test these damn whistles. As soon as momentum would swing one way — which it did, on several occasions, as Jabari Parker nailed 3s and Perry Ellis floated hook shots — a whistle would fracture the flow. When Wiggins picked up his second foul just under 10 minutes into the first half, let’s just say that Chicago’s paying clientele was less than pleased to be deprived of their Wiggins-Parker main event.

In one fell snip, Andrew Wiggins telegraphed the column lede to dozens of America’s worst sportswriters while maintaining the air of mystique that swirls around the stoic swingman. While I was a fan of his long hair — it just looked goofy, and I think Andrew Wiggins is goofier than currently understood — certainly the decision to go fade adds to the Wiggins mystery. To me, the longer, messier look was symbolic of his laid-back IDGAFness that is central to his appeal, so now I don’t know what to think. That smile is still bangin’, though.

How Many Boxes of Unmarked Bills Did Nike/Adidas/Li Ning Reps Send Out Last Night?