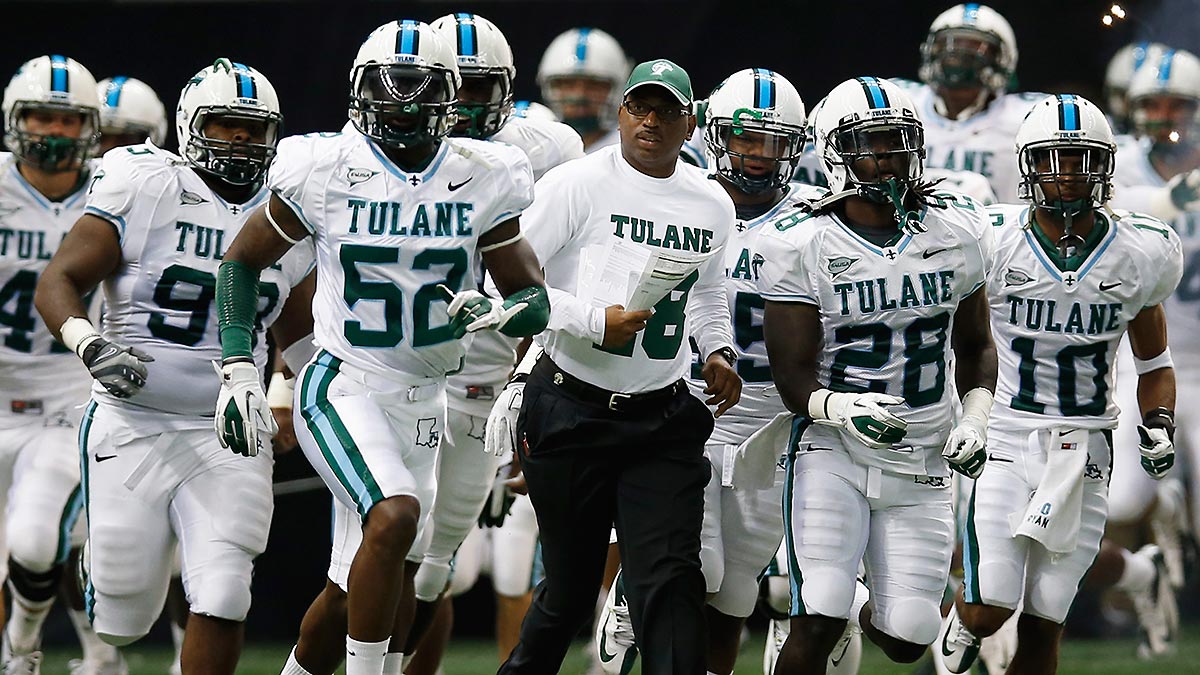 For big events, like Saints games, or the Sugar Bowl, the Superdome is a facility par excellence. It’s a cauldron in the best possible way. I had the privilege of being in the Dome when Az-Zahir Hakim dropped the ball in 2000, sealing the Saints’ first playoff victory, and when Steve Gleason blocked a punt in the team’s first game in the Dome after Hurricane Katrina, indelible moments of raw, ear-splitting pandemonium. I saw Virginia Tech’s redshirt freshman quarterback, Michael Vick, run figure eights around Florida State’s defense in the 2000 Sugar Bowl, his talent so expansive it seemed to fill all 162,434 square feet even in a losing effort.1 When the Superdome experience is good, there’s nowhere better.

When it’s not good … well, it’s a Tulane home game. I’ve taken in a handful of those over the years, too, and the juxtaposition in energy is so palpable it’s disorienting. Just as the Dome amplifies the combined electricity of 70,000 people, it also amplifies the overwhelming void of 60,000 empty seats. Sounds echo. The air conditioning, set for capacity, blasts away like an industrial Aeolus. Conversations can be overheard from sections away. Once, I picked out the sound of popcorn popping at the concession stand, from my seat. Cheering is less a collective compulsion than a self-conscious initiative. Everyone can hear you, and it feels slightly silly and inappropriate — not to yell, necessarily, but to be noticed caring enough to yell. The marching band, while enthusiastic enough, is bite-size for a college outfit, presumably so as not to alarm people when the brass section pierces the chatter.

There were more alleged Tulane fans milling in the background of Treme scenes than there were in the stands in that clip — although admittedly probably more people than actually watched Treme.

For nearly four decades, playing in the shell of one of the most iconic venues in sports has been Tulane’s unique burden, an omnipresent reminder of just how far from the big time Green Wave football actually resides. On occasion, the school has opted to host homecoming games in a local high school stadium built in 1937, ostensibly because it offers better tailgating. The truth is, the neighborhood setting just feels right.

This is around the point when I might start to worry about sounding condescending, if Tulane hadn’t just spent three years and $73 million based on that very premise. No, the school fully agrees: On Saturday, the Green Wave will host Georgia Tech in the first game at 30,000-seat Yulman Stadium, the “crown jewel” of the university’s effort to embed Tulane football more deeply in the culture of the city.

At first glance, everything about the move feels right for an aspiring program. The location feels right: The stadium is part of the university’s main Uptown campus, only a few miles from the Superdome but a world apart in terms of logistics and aesthetics. (Tulane’s campus is in the middle of a largely residential area, adjacent to Audubon Park; the Dome is downtown, adjacent to I-10.) The size feels right: A real estate agent might describe a capacity of 30,000 as “cozy,” but cozy is of a piece with the urban campus, and with the realities of the fan base; according to the NCAA, Tulane averaged just shy of 20,000 people for home games in 2013, and has only exceeded 30,000 since the turn of the century for games against in-state rivals (LSU, Southern) and high-profile opponents from adjacent states (Mississippi State, Ole Miss, Texas).2 The timing feels right: The Green Wave are coming off their first winning season in more than a decade, which came under then second-year coach Curtis Johnson, a New Orleans native, and they’re in their first season in the American Athletic Conference after 18 years in Conference USA.

And so far, at least, the response has felt right: The maiden voyage against Georgia Tech is sold out, according to athletic department spokesman Roger Dunaway, making this the first sellout for Tulane football since the program abandoned Tulane Stadium (capacity: 81,000) in the early ’70s. Single-game tickets for the opener went on sale on August 15 and sold out in 14 minutes. Students have claimed 4,800 tickets, per Dunaway, and if they all show Saturday it will mark the most students at a Green Wave game in more than 40 years. The stadium is the most positive development for the long-term potential of Tulane football in those students’ lifetimes, or in the lifetime of just about anyone who can remember having once been a student.

In another lifetime, Tulane had the makings of a Depression-era powerhouse. In 1922, the program was a founding member of the Southern Conference, the precursor to the SEC, and it won or shared six SoCon/SEC championships in the subsequent two decades. From 1930 to 1939, the Wave racked up a 73-22-6 record, 10th-best in the nation in that span, and played in both the Rose and Sugar Bowls when the concept of a “bowl game” was still a recently concocted novelty for the sake of boosting tourism.3

Since the early ’50s, however, there has been only depression. In 1951, new university president Rufus Harris effectively withdrew Tulane from the burgeoning SEC arms race by reducing coaches’ salaries, cutting scholarships, and demoting physical education from a major to a minor, vowing not to allow athletics to overshadow academics; after 15 years of futility, the Green Wave formally left the conference in 1966 in favor of independence and, as far as football was concerned, irrelevance.

From 1952 to 2011, Tulane’s winning percentage (.353) ranked 95th out of 98 schools that competed at the highest level over that entire span, ahead of only Northwestern, New Mexico State, and Vanderbilt. On more than one occasion — most recently in 2005, following the devastation of Hurricane Katrina — the university has flirted with the possibility of dropping out of Division I sports altogether.

For most coaches, the job has been a kind of Bermuda Triangle. Before Johnson, 10 of the previous 11 head coaches left Tulane with a losing record during their tenure, a list that includes a young Mack Brown and a lot of other guys who may as well have disappeared in Lake Pontchartrain.4 Besides Brown, the only other man to escape the spiral of futility in the last six decades was Tommy Bowden, who arrived with innovative offensive coordinator Rich Rodriguez in 1997, oversaw what has to be the most improbable undefeated season in NCAA history in 1998, and hopped the first plane to Clemson ahead of the bowl game. Before last year, the Green Wave had made exactly one postseason appearance since Bowden’s departure, in 2002, one of two winning seasons since his breakthrough.

Johnson knew the record he was inheriting intimately, because he knows New Orleans. He grew up in the city and spent the last six years before landing the Tulane job on Sean Payton’s staff with the New Orleans Saints. He won a Super Bowl ring in the city. As wide receivers coach at Miami, he won a national championship ring with Ed Reed and Reggie Wayne, two star players he recruited from the city. At an earlier stop, Johnson was the guy who convinced fellow New Orleans native Marshall Faulk to leave home for the far-flung locale of San Diego State.

Johnson knows the neighborhoods where these guys live, and he knows their high school coaches, some of whom he grew up with. When he first took the job, Johnson pitched academics: “At Tulane, we’re not talking about a four-year plan,” he told me before his first season, in 2012. “We’re talking 40-year plans.” If anything, though, his short-term goals are ahead of schedule. At that point, the new stadium was still two years away and the prospect of a winning season even more distant; the departure for a more attractive conference was not yet conceivable. Would he even survive to field a team in the “crown jewel”?

He has, with a win-loss record and a tangible selling point his predecessors can only envy. Now comes the hard part: Convincing the locals the hometown team is finally worth the price of admission.