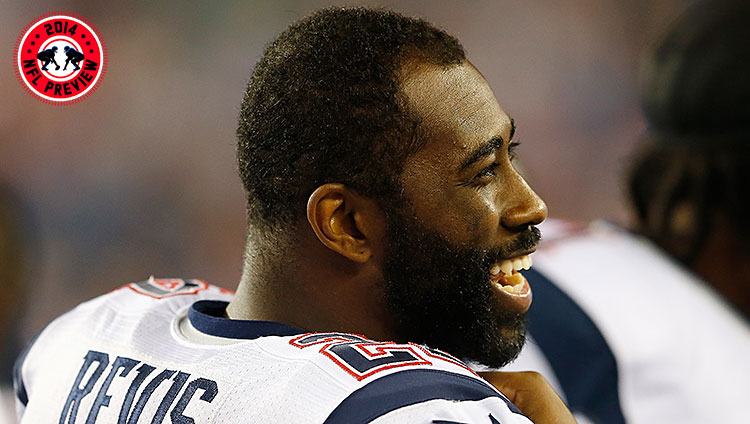 Preseason may be over, but that doesn’t mean all the questions about teams have been answered. In a lot of ways, the regular season is about answering questions. Not the “Is Joe Flacco elite?” kind, but specific, granular queries about whether certain units or players can perform enough to help their teams win. So let’s ask 32 questions for 32 teams, one each. Yesterday was the NFC. Today, the AFC.

How good is this defense?

Denver’s offense is almost guaranteed to fall off a bit, but a better defense just might make up for it. The Broncos were an average defense last year. Taking into account both returns from injury and free-agent additions, they’ve added DeMarcus Ware, Von Miller, T.J. Ward, Rahim Moore, Chris Harris, Derek Wolfe, and Aqib Talib to a defense that played in the Super Bowl. Denver consistently has a great run defense, thanks to an underrated, well coached, and deep defensive line. With Ware and Miller, the pass rush should keep pace. If all of this new blood can take them from middle-of-the-road to a top-eight defense, the Broncos should walk away with the division even with their offense taking a step back.

Are teams going to run all over them?

Last year, the Chargers paired one of the best offenses in football with the worst defense. San Diego finished 31st against both the run and pass, and only avoided giving up a ton of points because its offense sustained drives better than any in the league. Tom Telesco, in Year 2 as GM, spent his offseason throwing resources at one half of the problem. With their limited cap room, the Chargers added consistently reliable cornerback Brandon Flowers, fresh off a down year in a new system with the Chiefs. They also spent their first-round pick on TCU corner Jason Verrett. Both should be an upgrade from the failed Derek Cox–Richard Marshall experiment from a year ago, and with Eric Weddle already in place, San Diego gets a boost against the pass.

The issue is whether it will be any better against the run. Outside of fifth-round pick Ryan Carrethers (who might actually push for time at nose tackle), the Chargers are rolling with the same group they had a year ago.

Which Chiefs defense is real, and which is the impostor?

Through their first six games, the Chiefs were the best defense in football — on pace for a season-record 82 sacks, and giving up only 65 points. By the end of the season, their weighted DVOA was 14th, a massive fall. Tracing how it happened is easy. The pass rush, and those sacks, went away. Justin Houston and Tamba Hali either missed time or played hurt, and the rest of the defense started to crumble. Both are relatively healthy to start the year, and Kansas City added some insurance by taking pass-rushing terror Dee Ford in the first round. 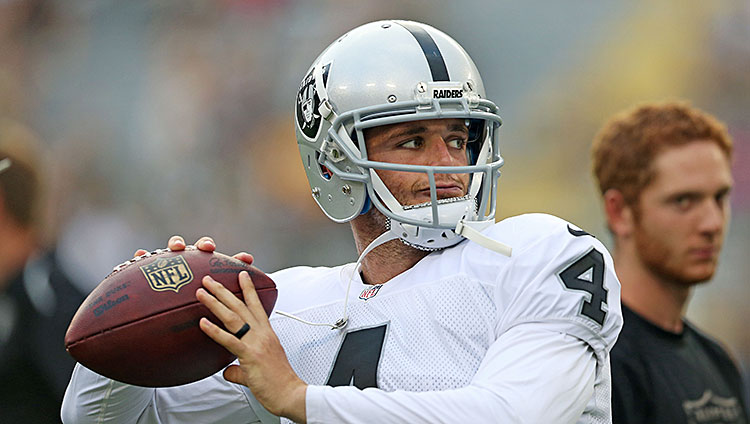 Is Derek Carr their guy?

He’s going to get his chance. For all of the Raiders’ problems over the past decade, consistent swings and misses at quarterback rank at the top. If Carr proves to be the answer, it doesn’t matter what else happens this season. It’ll be a success.

Can the Colts continue their climb on defense?

Defensively, Indianapolis went from the bottom of the league to the middle last year — a jump they can attribute to a career (and possibly enhanced) year from Robert Mathis, along with a very nice season from Vontae Davis. Mathis is going to miss the first four games, but the Colts made a couple of moves in free agency that might help mitigate the damage. Arthur Jones is just the sort of run-stuffer the Colts needed, and D’Qwell Jackson should be an upgrade at inside linebacker, even if he isn’t the player he was a few years ago.

Whether Indy can survive without Mathis may come down to what it gets from 2013 first-round pick Bjoern Werner in his second year. Werner was hurt at the start of last year, which is tough for any rookie to overcome. The Colts are banking on Werner’s development, because they didn’t make any other moves to add edge rushers in the offseason.

Is the quarterback situation bad enough to burn down everything else?

Ryan Fitzpatrick has been the standard for quarterback play that teeters on the edge of mediocrity, and it’s possible he’s taken a tumble the wrong way. Andre Johnson is still casually putting up 100-catch, 1,300-yard seasons, and DeAndre Hopkins is ready to make a big jump. But that side of things gets slowed down if no one can get them the ball. I don’t know who’d be surprised if we saw Ryan Mallett playing quarterback; I also don’t know if that’s a good thing.

Can Ken Whisenhunt repeat his magic from last season?

Credit for San Diego’s offensive turnaround last season doesn’t go to any one person, but Whisenhunt was the coordinator of a unit that leapt from 24th to second in DVOA. He doesn’t have Philip Rivers this time, but the Titans have a bunch of intriguing talent dotting the offensive depth chart. Kendall Wright, Justin Hunter, Nate Washington, and Delanie Walker are dangerous receiving options if deployed in the right way, with adequate quarterback play. And their offensive line should be better in its second year together.

The question is whether Jake Locker is closer on the quarterback spectrum to the Rivers-Roethlisberger types Whisenhunt has thrived with, or the Lindley-Skelton class that turned his offenses into a train wreck. Locker’s somehow only made two more starts than Geno Smith, so this year could go a long way in finding out the answer. 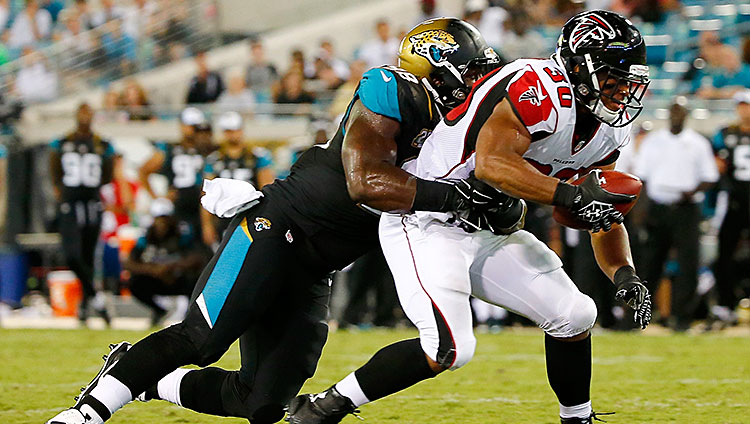 Will this actually be a respectable defense?

“Respectable” is a relative term. For Jacksonville, it would mean finishing somewhere around league average. The Jags were undeniably better on defense near the end of last season, thanks to a crop of young players noticeably improving. If guys like Johnathan Cyprien and Dwayne Gratz can build on their solid second halves, the addition of dependable if unspectacular former Seahawks Chris Clemons and Red Bryant could turn Jacksonville into a real-life NFL defense.

What is Hue Jackson’s offense going to look like?

Jackson has been mum about his plans, but there’s been speculation that the Bengals will lean toward a more run-heavy approach. Despite having one of the league’s best offensive lines, the Bengals were a below-average rushing team a year ago. BenJarvus Green-Ellis and his 3.4 yards per carry probably didn’t help. Green-Ellis got 50 carries more than Giovanni Bernard last year. A heavier dose of Bernard, with some Jeremy Hill sprinkled in, should make for a more effective running game.

Can the promising young players and declining older ones on their defense meet somewhere in the middle?

Baltimore’s defense is a combination of 2011-era stars (Haloti Ngata, Terrell Suggs, Lardarius Webb, Daryl Smith, Elvis Dumervil) and high picks from each of the past two drafts (Matt Elam, Arthur Brown, C.J. Mosley, Brandon Williams, Timmy Jernigan). The Ravens were a top-10 defense last year, thanks to very nice years from Dumervil and Smith. If they can do the same, and guys like Elam and Williams improve while Mosley and Jernigan add something right away, this could be a scary group.

Will the offensive line finally — finally — hold up?

It seems like the Steelers’ line has been a problem since Alan Faneca left, but this year, they’re looking at some stability. Kelvin Beachum isn’t built like a left tackle (only 6-foot-3), but he wasn’t bad after being thrust into the role a few games into last season. Maurkice Pouncey is back after missing almost all of 2013. David DeCastro is playing like a first-round pick. Health will always be a concern for this group, but if the starting five can stay intact, Ben Roethlisberger should be looking at a more comfortable life than he’s used to. 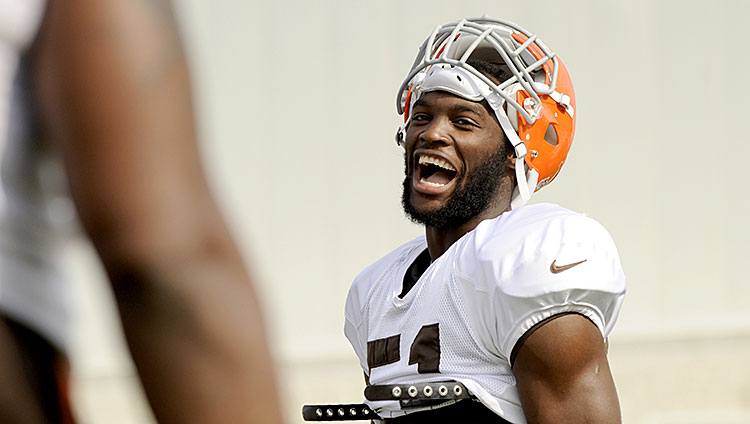 Can Mike Pettine be a wizard like he was last year?

Pettine turned Buffalo’s defense from one of the league’s worst into one of its best, and he did it with very little roster turnover. The Browns finished in the bottom half in defense last year, but they were still better than the Bills crew Pettine took over. Buffalo’s leap was the result of taking a talented front four and creating a pass-rushing nightmare. Cleveland’s group isn’t quite on that level, but there’s still plenty to work with — Desmond Bryant, Barkevious Mingo, and Paul Kruger for starters. Also, 2013 seventh-round pick Armonty Bryant was one of the best players of the preseason. With guys like Karlos Dansby and Joe Haden behind them, a great pass rush could vault the Browns into a top-10-type defense.

What’s the ceiling for their defense?

A lot of New England’s defensive potential has to do with health. They don’t have much depth, but wow, is that starting 11 scary. I expect the Darrelle Revis we remember from the Jets, and having Devin McCourty behind him automatically makes this secondary elite. We know what a healthy Jerod Mayo provides, and Jamie Collins was very impressive during last year’s playoffs. Two concerns stand out: How healthy will Vince Wilfork be, and where is the pass rush coming from outside of Chandler Jones? I suspect to see first-round pick Dominique Easley sooner rather than later to help with that second one.

What can new offensive coordinator Bill Lazor do with Ryan Tannehill and those weapons?

Miami’s pass protection shouldn’t be the disaster it was last year, and now that it can keep Ryan Tannehill alive, it should have a chance to see what he can do. Chip Kelly’s offense in Philadelphia (where Lazor was the quarterbacks coach last year) was built on creating space, and the Dolphins have a group of players — Lamar Miller, Mike Wallace, and even Knowshon Moreno — who could do well with more of it.

Is this the year Rex Ryan’s pass-defense magic runs out?

The Jets finished 18th in pass-defense DVOA a year ago, which is still too high. With a hurt Antonio Cromartie and a not-ready Dee Milliner manning their cornerback spots, the Jets should have been worse. Ryan has always been able to piece together top-10 defenses without much of a pass rush. The Jets finished in the bottom third of the league in adjusted sack rate, behind a defensive line that’s absolutely dominant against the run but struggles to get after the quarterback.

That same crew is back this year, and somehow, the Jets’ corners might be even worse. After the bizarre Dimitri Patterson situation and with Milliner still nursing a high-ankle sprain, there’s a chance New York’s starters on Sunday are the disappointing Kyle Wilson and Leon McFadden, who the Browns waived three weeks ago. That might be a bridge too far, even for Ryan. 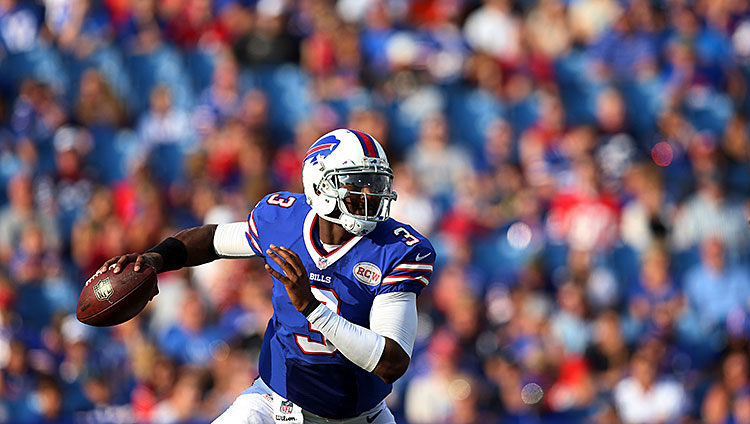 Will their impressive stable of skill-position talent matter?

The Orton signing doesn’t bode well for EJ Manuel’s future, but the good news is that if Orton is better today than Manuel, he’ll have plenty of help. Buffalo’s offensive line is still an issue, but if the goal is to build the best roster of promising skill-position talent, Watkins, Williams, Robert Woods, Marquise Goodwin, C.J. Spiller, and Brown is one hell of a collection.