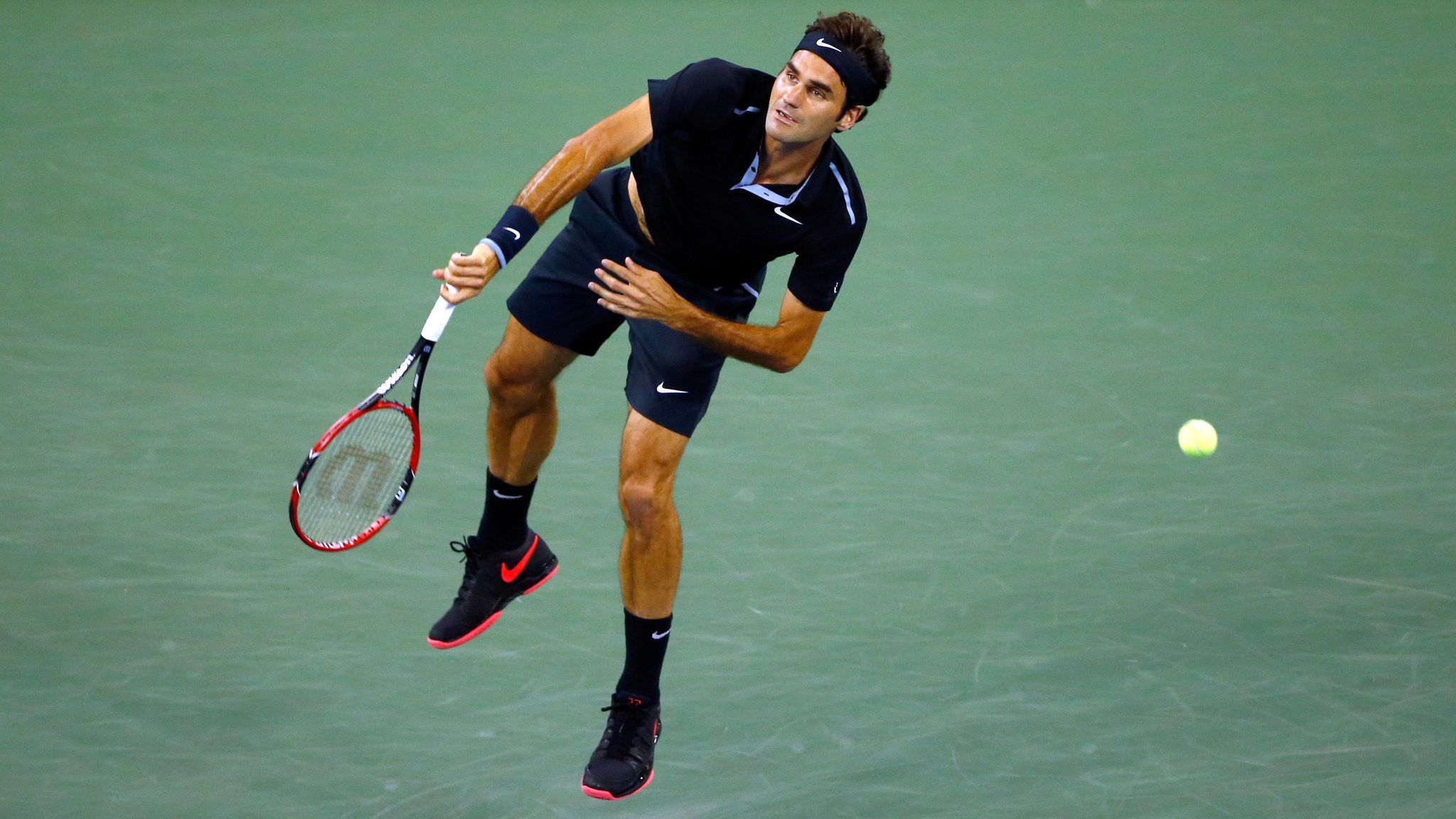 Roger Federer is 33, and even now, he makes tennis look easy. He doesn’t sweat much, even when it’s hot. He doesn’t struggle, even when he’s losing. Federer’s defeats can sometimes feel strangely meek, for the same reason that his victories can seem foreordained — because he seldom gives the impression that he’s fighting. A warrior-baseliner like Rafa Nadal, his great opposite in this respect, will sneer and roar and hack at the ball like the last defender of a city — anything to keep the match going. Federer might release an occasional “Come on!,” but for the most part he remains silent, poised, observant. He’s a watcher, a glider. He tiptoes very fast. He plays in the noiseless channels of the universe, and if the universe is against him, he doesn’t waste his time arguing about it. That’s not to say he surrenders, only that there’s something inward about his resistance. He makes winning and losing look almost the same — not like a test of strength; like something closer to a form of meditation.

Or he does most of the time. Last night, in his U.S. Open quarterfinal win against the 20th-seeded Frenchman Gaël Monfils, Federer argued back. He snapped at the chair umpire. He cursed at himself. He glared needles at his more flamboyant opponent. Monfils is a player whose theatrics — both the good kind, as in outrageous shots, and the bad kind, as in elaborate, semi-arbitrary tantrums — seem devised specifically to drive Federer crazy. Last night, during the long, strange 4-6, 3-6, 6-4, 7-5, 6-2 match, that’s what they did. The higher the moon rose over Arthur Ashe Stadium, the more Federer looked irritated by Monfils’s antics and his own erratic play. He had the air of an exhausted duke being shown up by a witty commoner. He fist-pumped after winners. He screamed. He charged the net at every opportunity, goaded by a shrieking crowd. He stretched to slam overhead putbacks. He labored over baseline rallies. He worked.

It’s been fascinating to watch Federer during this tournament. Before Monfils, he played a series of easy matches against relatively weak opponents — the highest seed he’s faced is no. 17 Roberto Bautista Agut. Since he’s also been in top form, these felt somehow like quintessential Federer matches, matches not only that he won but that also helped to distinguish the particular quality separating his greatness from that of the best of his peers. Because even now, even at 33, there’s something different about Federer. He’s no longer better than the other top players, but he’s not quite like them, either. I’m not talking only about techniques or tactics here, but about the total aesthetic experience, the sort of Tennisanschauung he represents. It’s hard to describe this in terms that don’t sound a little feverish, and God knows Federer has been on the receiving end of some foamy lyricism in his time. But the cues are also not hard to detect. There’s a reason, for instance, why Anna Wintour sits in Federer’s box and not Djokovic’s. There’s a reason his game translates so easily into his premium-vulgar luxury brand. The reason is simply that he makes tennis look easy, which is to say that at his best, he virtually erases the physical dimension of the sport.

Consider his second-round match against Sam Groth. Groth, a big Australian currently ranked 104th in the world, could maybe be a more perfect contrast for Federer if he actually released a rap record. Groth took time away from pro tennis to play lower-league Australian Rules football; that’s the level of not-Federer we’re talking about here. Big, strong, aggressive dude. Huge serve. Chirps “Sorry, mate” when he aborts a toss. Generally plays like the ball is an abstract idea that’s been thrown at him in a barroom conversation. I liked watching him. But what you were aware of, from up in the stands, was how much cumbersome human body was deployed on Groth’s side of the net, and how little there seemed to be on Federer’s. Groth would hotly charge down the ball and stab his racket at it, and you’d sense the muscles straining in his thighs, the pressure on his shoulder. Then the ball would sail over the net — and on the other side, instead of that churn of imperfectly matched moving parts, it was just, like, Siri. You didn’t think about Federer as a body. You thought about the ball, about where it was going after it left his racket. You thought about angles and arcs.

At one point, with Federer serving at 15-0 in the deciding game of the second set, Groth managed a series of heavy shots deep to Federer’s backhand side. Federer parried them, crept toward the net, leapt up to slam down a lob attempt, then dropped back to the baseline, where he eventually beat Groth with a sliding backhand cross-court lob that you could call sublime without flinching — two or three really difficult shots and one phenomenal one, but what’s amazing, if you watch the video, is how easy it is to keep your eyes fixed on Groth. He plays a really good point. He’s also visibly straining to keep up. He’s experiencing a drama. He’s the tragic protagonist of the rally. Federer is more like the writer of it, whose presence you sense but don’t see.

There’s a tension in tennis, always, between the physical power of the athletes and the abstract beauty of the game. This is true in all sports, probably, but you feel it more in tennis than in, say, football, where the sheer amount of visual chaos on every play makes it harder to see pure geometries. In tennis, being thrilled by what the athletes can do — how fast they run, how deftly they manipulate the ball — is never quite the same thing as being thrilled by the shape of the point. The game is amazing as a spectacle of bodies and also as a spectacle of math. Of the many reasons why the Federer-Nadal rivalry has been riveting for so long, one is surely that they each seem to represent one side of this dichotomy. Nadal is all sinew and biceps. Federer is all elegant degrees. Of course Federer is also made of flesh and blood; he just moves so efficiently, goes so long between injuries, and (still) constructs such imaginative points that you’re surprised whenever he shows it. He looked out of character grinding against Monfils because he looked like a human being.

I’ve been reading about old airships lately — zeppelins, I mean. Giant craft that used to carry passengers in the decades before the jet plane. You can find old photos online of these being constructed, and they’re inexpressibly weird and beautiful, forests of skinny ladders stretching up into the complex deep-focus spiderwebs of the skinless zeppelins’ unfinished frames. Long, curved bars of metal intersecting in patterns so baroque there’s something almost eerie about the fact that they’re meant to serve a real-world function. It’s lyrical, I know, but as I’ve watched Federer play over the last two weeks, I haven’t been able to stop thinking about these images — thinking that tennis, in its own strange way, is constantly creating shapes like these, and that Federer builds the most astounding invisible zeppelins. He’s had an easy draw, but he’s also playing some of the best tennis of his late career: 12-4 against the rest of the top 10 this year, a win at Cincinnati the week before the U.S. Open started. He plays the 6-foot-6 no. 14 seed, the Croatian Marin Cilic, in the semifinals on Saturday, and then, if he wins, possibly Djokovic in Monday’s final. He’s 33. He may not have a better chance to win an 18th major. I’ve been marveling at the contours of his game for days. Against Monfils, he had to fight. I’m looking forward to seeing whether the airship can still fly.