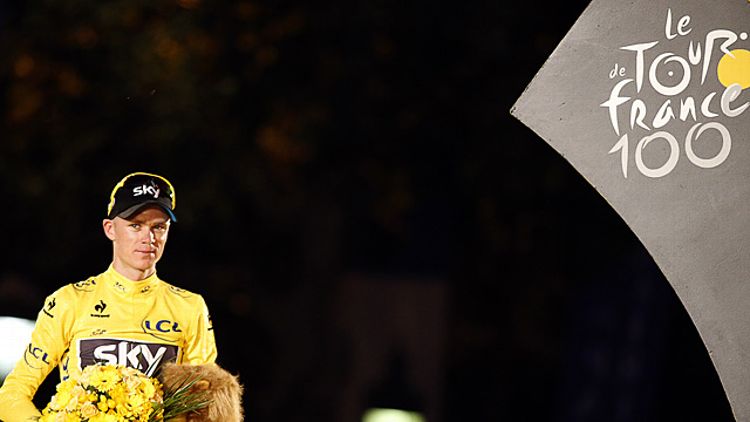 When I watch the Tour de France, most of my bros ask me, “What the hell are you even watching?” It’s hard to explain the nuances of cycling and the beauty of the Tour de France, the best race in the sport, without using the ceremonial language that we annually encounter. On top of that, because the American identity of cycling has been so closely tied to Lance Armstrong, most people immediately dismiss the credibility of the sport or its viability in America.

The 100th Tour de France, which ended yesterday, was probably the most fulfilling of my cycling fan life because of the hyper-mountainous race route and the influx of new talent eager to prove themselves in a (hopefully) post-doping era. Chris Froome won, but true cycling fans love every single race within the race just as much as the pursuit of the yellow jersey. Every year you understand a little bit more, and the three-week race becomes the most fulfilling stretch in the summer sports calendar. Most importantly, you begin to understand the amount of pain that a rider must endure to finish the Tour de France, much less finish in one of the four prized jerseys.

American coverage of our mainstream sports has turned into a narrative-manufacturing machine, but the Tour de France is less plagued by this effect of over-coverage. Cycling has become my oasis from the generic American sports narratives, but as I fall deeper into the world, I can’t help but see the cross-sport comparisons we would be making if cycling ever became popular in America. This is a recap of the memorable cyclists and moments of the 2013 Tour de France, as compared with more widely known American and “Americanized international” sports.

When you think about great cyclists, you generally think about people who are insane enough to train on a bike for 10 hours every day. They ascend mountains that most people would quit walking up on foot. They develop egos to outlast all their competitors and win the yellow jersey, resulting in the Armstrong-type assholes of the world. The Kenyan-born (but probably soon-to-be British knight) Froome is the antithesis of the doping era’s “larger than life” yellow jersey winners. All of his interviews are humble and gracious, and he makes it hard to root against Team Sky, whose budget makes them feel like the unbeatable New York Yankees of cycling. Despite the British cycling renaissance, the fact that the team was funded as a British initiative to strengthen Rupert Murdoch’s sports programming will always make them feel a bit evil.

Like Duncan, Froome has a quiet fire that burns inside and it is only visible in his sporting activity. Froome chose to ride this year’s Tour de France with a level of panache that deconstructed the “boring, calculating” perception of Sky’s dominant win last year. The mountain stages during the 2012 race were all about Bradley Wiggins conserving time and tailing his rivals with the help of Froome. Wiggins had enough time-trialing kilometers to win the Tour and spent even more time making headline-grabbing rants against doping accusations. This year, Froome clearly demonstrated he was the strongest rider in the peloton and avoided disasters without being overly cautious (or boring). The strength of Froome’s mountain climbing, time trialing, and his unique ability to make allies on the long climbs after his teammates had cracked make him the perfect winner. Froome’s comfortable time gap going into the Alps put him in a position where he could work with competitors Nairo Quintana or Joaquim Rodriguez to help them gain time over Alberto Contador (or even win a stage). The image of him attempting to communicate with opposing riders so they could all have successful days is probably one of the most enduring images of his Tour win.

Peter Sagan is the equivalent of Brazilian soccer player Neymar

Sagan and Neymar are both natural talents who are leading their sports into a new generation, but their huge personalities might also invite scrutiny. Neymar is leaving his club team in Brazil to join FC Barcelona, and next year the weight of his country will be on his shoulders when Brazil hosts the World Cup. He has already had a brilliant career, but he will now have the opportunity (or burden) to meet new challenges on a much larger stage.

The Slovakian green jersey winner is already one of the most famous riders in cycling, with a strong personality to match his versatile skill set. Sure he can do wheelies as he is about to be passed by yellow jersey contenders on mountain stages, but does he have the tools or desire to be a GC contender?

Fortunately, he has talent, saving him from becoming a hated figure in cycling. Sagan’s green hair on the final day of the Tour tempted me to compare him to Dennis Rodman, Ron Artest, or even the former wig-wearing Andre Agassi. But he has many years to continue to write his own story. Has he has already found his place in grand tours as a hilly stage winner and green jersey wearer? No matter what, I’ll always be impressed by his ability to ride a bike over a car. Not many professional cyclists have the personality to pull off a viral video.

Nairo Quintana is the Manu Ginobili of European Cycling

The Colombian mountain climber is easily the most interesting rider in the peleton, but he is very much an outsider in the Eurocentric world of cycling. As was documented in a brilliant piece by Cycling Inquisition, Quintana was born into poverty in Colombia. His only route to school was up a long hill with a massive gradient, which became his daily bike ride. At the beginning of his career, his father would often plead with race officials to pay race entrance fees after his son won the race. Eventually, his early success in Europe (along with a few other Colombians) was met with an odd amount of racism from the predominantly European and American peleton. After finishing in the white jersey AND the polka dot jersey in this year’s Tour de France, he is now one of the most popular people in Colombia, and he is only 23 years old.

His uniqueness as a disruptive cycler reminds me of Ginobili’s earlier years in the NBA, when there was truly no other player like him. While Manu had success in European and international basketball, a pioneering spirit was necessary to imprint his identity in an NBA where he was a cultural outsider. It even took a while for his own team to trust in his abilities.

What makes Quintana interesting was his naive disregard for strategy in the mountains. He often made poor tactical decisions, attacking too early during stages, which wasted a ton of his effort. Will he continue to ride without fear, or succumb to the thoughtful, cautious tactics associated with being a team leader?

The Saxo-Tinkoff captain was constructed as Armstrong’s last rival during his final comeback when the two were awkward teammates on Astana. Contador still rides with a cloud of doubt surrounding his talents because of his doping suspension and stripped 2010 Tour de France win. He is one of the last remnants of a tainted generation of riders, and his narrative is not helped by his defining moment, when he rode away from Andy Schleck on the Col du Tourmalet after Schleck’s bike chain broke in 2010. He will never be a rider of the people, and he has a very unlikable essence. Watching him lose his hold on second place on the final competitive day of the Tour de France was pretty sweet. His situation reminds me of the odd prison that Rodriguez finds himself trapped in. Neither can ever endear themselves to their sport’s fan base after their ties to performance-enhancing practices, but they’ve probably made enough money so that what we think of them doesn’t matter.

The double ascent of Alpe D’Huez just days after Mont Ventoux is the equivalent of turning the Super Bowl into a best-of-three series played in one week.

It took me a while to really think of an American sporting equivalent to the magnitude of this year’s final stretch of the Tour de France through the Alps. By this point, the riders have been in the saddle for two weeks. They had to ride up two of the most daunting mountains in race history (and descend down them at dangerous speeds). Climbing Mont Ventoux at the end of the longest stage of this year’s Tour was difficult on its own. Also riding up Alpe D’Huez twice during the same stage was just insane. This was the stretch where the race was won and the podium finish finally emerged, and you have to remember the unmatched level of fatigue and endurance required in this superhuman feat. It was basically the championship series of cycling, and the competitors only had one rest day in between.

The Orica-Greenedge bus crash has no American sports equivalent

The team bus of Orica-Greenedge crashed into the finishing line overhang at the end point of the first stage. Video of the event went moderately viral as a display of technological failure or human ineptitude, but not everyone actually understood the drama that ensued because of the bus crash. It caused an unimaginable level of chaos as riders were speeding toward the finish line, and the team with the rider that ended up winning the stage, team Argos-Shimano, actually had no idea it even happened because of its team radio failure. At first race officials attempted to relay the information to the riders that the race would end at the three-kilometer mark, before realizing that there was a nasty bend right afterward. Eventually, the bus was moved, but the confusion might have contributed to the Tour’s biggest pileup. Fortunately, Orica-Greenedge went on to win the team time trial and wear the yellow jersey for a few days, or else it would only be remembered as the team with the most unfortunate bus driver. There really is no comparison to this event in an American sport, because the public setting of the Tour de France makes it a place where anything from a wandering dog, an overzealous fan, or a team bus can impact the race.

Most riders in cycling opt for more modernized glasses to protect themselves from the sun. Hesjedal didn’t have a great Tour by his own standards, but at least his glasses are part of the post-ironic retro fashion movement in cycling.

The NBA MVP doesn’t always get handed out to the best player in the league in any given season. Instead, voters determine who “deserves” it based on various factors. I have a difficult time understanding if the green jersey is actually on the shoulders of the best sprinter this year even though the jersey isn’t as subjective as the NBA MVP voting. The green jersey is incredibly difficult to win, because of the amount of work a team must do to pull back breakaways and the energy required to control the race into the intermediate sprint points. This year, it felt like Marcel Kittel and Mark Cavendish were duking it out for the most stage wins, with Andre Greipel in the mix as well. Sagan often tailed these sprinters in third or fourth place at the end of stages in order to remain consistent in the green jersey standings. This year’s race was certainly more interesting without as many flat stages for the sprinters, but it made it difficult to determine who was actually the best pure sprinter.