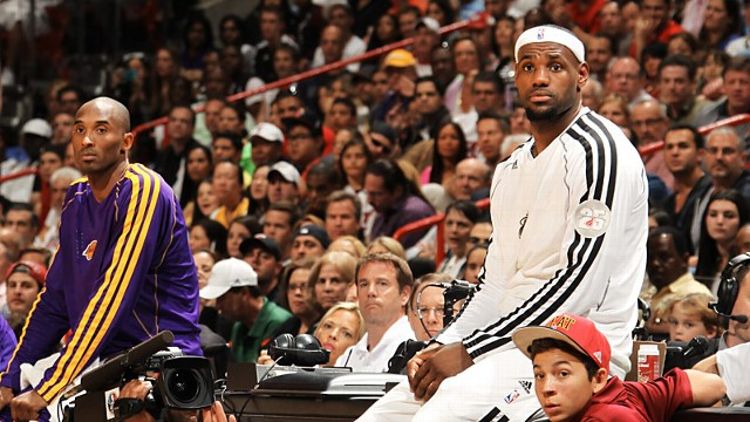 The 2013 free-agency signing period isn’t even over yet, but already the basketball world can barely wait for the summer of 2014, when LeBron James, Dwyane Wade, Chris Bosh, and Carmelo Anthony can all become free agents. Adding fuel to the fire is the fact that the Lakers will be armed with loads and loads of cap space, and consequently will be writing checks to LeBron, Carmelo, Thor, and anyone else they damn well please, according to various reports.

You can’t turn your head twice without seeing something about the Lakers’ grand 2014 plan, which is all well and good, except that the Lakers won’t have nearly as much cap space as people seem to think they will.

Let’s stipulate a few things before we break down the most possible room under the cap the Lakers can have:

1. For the purposes of this exercise, we’ll use the projected $62.1 million 2014-15 salary cap reported by ESPN’s Marc Stein, Larry Coon, and others.

3. The Lakers still own their own 2014 first-round pick, which will also count against their projected cap for the 2014-15 season. To calculate the maximum possible cap space Los Angeles can have, we’re going to assign it the 30th pick in the draft, which carries a first-year salary of $911,400. Note that the Lakers are extremely unlikely to actually have the 30th pick in the draft, as this is a team that just finished eighth in a brutal Western Conference, lost Dwight Howard, and may be without Kobe Bryant for part of the 2013-14 season, depending on when he returns from his Achilles injury.

4. Under the collective bargaining agreement, new contracts for James and Anthony can have a maximum first-year salary of 105 percent of the previous year’s (i.e., 2013-14) salary.

5. The Lakers are subject to the same rules as the other 29 teams and don’t have a special Laker Exception that allows the team to sign anybody it wants.

Because of these pesky little things called cap holds, the Lakers actually won’t have any salary-cap space at the start of free agency on July 1, 2014. A cap hold, according to Larry Coon’s CBA FAQ, is a placeholder for players the team is expected to sign. Cap holds are added to the books as a percentage of the previous salary of every free agent not renounced, and if a team has fewer than 12 players under contract, an incomplete-roster charge cap hold in the amount of the rookie minimum salary is added for each open roster spot under 12.

The following Lakers have cap holds for the 2014-15 season: Kobe Bryant, Pau Gasol, Steve Blake, Jordan Hill, Chris Kaman, Jodie Meeks, Jordan Farmar, Nick Young, and Wesley Johnson. So here’s what the Lakers’ books look like if the team doesn’t renounce the rights to any of those players. (All salary and cap hold figures are from HoopsWorld.)

Of course, this scenario doesn’t exist on any plane of reality. Because the Lakers will want to carve out the maximum amount of salary-cap space possible, the team is likely to renounce its rights to at least some of its free agents.

Extremely optimistic result of this plan: Mitch Kupchak figures out a way to drug the other 29 teams on draft night and Andrew Wiggins falls to the 30th pick.

More likely result: The Lakers get Aaron Harrison, Chad Ford’s no. 30 prospect on his top-100 big board for the 2014 NBA draft, and move forward with a similar roster to the one they have now.

Scenario 2: Renounce everyone, including Kobe

While this scenario is also not really grounded in reality, we’re including it to throw Lakers fans a bone and show them a situation in which their team actually does have enough cap space to offer a maximum contract to both James and Anthony.

Of course, by renouncing everyone, including Kobe, it becomes extremely unlikely that the team will sign either of those players, let alone both. But hey, a fan can dream, right?

Extremely optimistic result of this plan: LeBron, Carmelo, and Thor (for the veteran’s minimum)

This is a scenario as least somewhat grounded in reality. We know the Lakers aren’t going to renounce the rights to Kobe Bryant. He’s too popular, too embedded in the organization’s culture, and we’re assuming that Mitch Kupchak and the Buss family do not want a full-scale riot to break out in the streets of Los Angeles. So let’s assume the Lakers renounce the rights to everyone except Kobe.

The Lakers’ cap room then depends on the exact dollar amount of Kobe’s 2014-15 salary. For his part, Bryant told Lakers Nation’s Serena Winters that he will not be taking a pay cut, giving him a starting salary of $31,976,495.

With that, the Lakers are looking at $14.5 million in cap space, at most (and assuming they get a favorable draft pick in terms of cap calculation). This is not nearly enough room to sign even one of James and Anthony, let alone both.

This scenario assumes that Kobe Bryant, who has already said he will not take a pay cut, willingly takes a pay cut of about 33 percent, for a starting salary of $20 million. Good news, Lakers fans — in this scenario, your favorite team has enough cap space to sign one free agent to a maximum salary contract, with a little bit of room left over to sign a supplemental player as well.

These are the “everyone takes a pay cut” scenarios, similar to the strategy enacted by LeBron, Wade, and Bosh in 2010. While you might be able to convince yourself that Kobe will take a pay cut (he’s getting old and wants another ring very, very badly), or that LeBron would take a pay cut (he’s done it before), you’re outright crazy if you think Melo is doing it. This is the same guy who forced his way to New York via trade rather than waiting to sign there in the offseason because he wanted to get his maximum extension in before the new collective bargaining agreement presumably lowered the value of maximum contracts (which it did).

Also consider that Melo can sign a maximum five-year, approximately $130 million contract with the Knicks if he opts out of his current deal and re-signs in New York. The scenarios listed above would have him taking a four-year deal that would pay him between $70 million and $80 million. Similarly, LeBron would be turning down a five-year, approximately $117 million contract to sign in L.A. for between $70 million and $80 million over four years.

As one veteran Los Angeles writer put it: pie in the sky.

More likely result: LeBron stays in Miami; Melo laughs when he walks into the Lakers meeting and Mike D’Antoni is in the room; Lakers sign Luol Deng and either Pau Gasol or Chris Bosh (if Miami doesn’t win the Finals next year and Pat Riley decides to make a change).

We’ve now reentered the realm of things that will never, ever, ever happen. For the Lakers to offer both LeBron and Carmelo full maximum contracts, Kobe would have to accept a 2014-15 salary of approximately $4.95 million. Again, this is assuming the Lakers get a salary cap–friendly draft pick. If the Lakers were to land the no. 1 pick, Kobe would have to accept a starting salary of around $1.26 million to make this scenario palatable.

Good luck to whoever is suggesting this type of pay cut to Kobe. No one makes it out of that meeting alive.

More likely result: Literally anything else, including the Lakers actually finding a way to sign Thor.