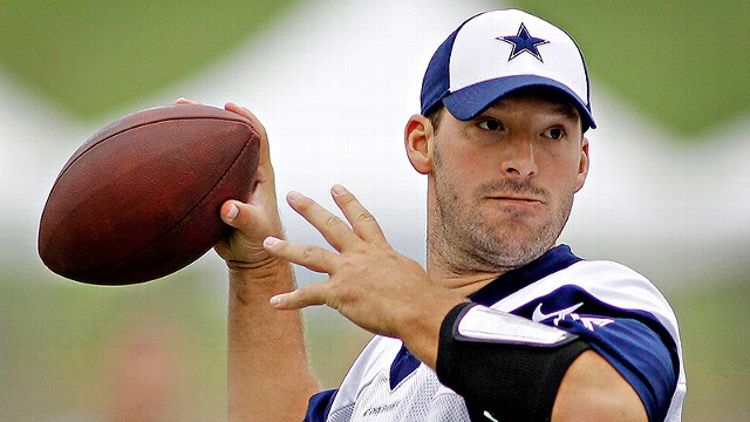 This past weekend, the 2013 Hall of Fame Game participants (the Cowboys and Dolphins, but you knew that, obviously) kicked off camp on opposite coasts. Our enthusiasm here is partly a product of knowing that the start of training camp means the season is fast approaching (seriously, guys, only 45 days; we’ve got this), but it also stems from the warm, familiar embrace of early-camp sound bites. Now is the time for boundless hope and absurd overreaction. So pretty much the best time.

In celebration of said time, we decided to take a look at where each of the big Dolphin- and Cowboy-centric headlines falls in its obviousness. It’s on a scale of 1 to 10, with a 1 being news that Tim Tebow has beat out Tom Brady and a 10 being that Tim Tebow is showing a willingness to learn from Tom Brady.

Tony Romo has let himself go a little

Here’s a quick blueprint for getting an entire fan base to resent you:

This is the point along that ride at which Tony Romo currently sits. I guess someone could argue that the first few steps aren’t necessary, but I think we all know that the purest hatred is a product of betrayal.

Romo apparently weighed in at 236 over the weekend — six pounds more than the highest reported figure during his Cowboy days. Romo disputed that number, obviously, but what Romo actually weighs doesn’t really matter. If Romo struggles, the starting point of any post-contract narrative is already there. This should be a really fun year in Dallas.

Jerry Jones doesn’t care what y’all say; Jason Garrett is not coaching for his job

If the Cowboys miss the playoffs this year, the four-year drought will officially be the longest of Jerry’s tenure. He’s not sweating it, though. Jones said that Garrett’s work with Romo and his response to the “unsatisfactory times” in which the Cowboys find themselves have created an encouraging future. I’m sure the outlook will be similar if Dallas starts 2-4.

Mike Pouncey is focused on football, not headwear

The Dolphins are optimistic

Miami was the clear winner of the Most Insane Things Said During OTAs title, and it looks like they’re serious about defending that crown during training camp.

RT @coltonmathews16: @Bgibson04 so proud of you man what is your goal for our team this year? // playoffs r a must.

Brandon Gibson is the lesser of the Dolphins’ two wide receiver signings, but it seems like he’s gotten the message. Brian Hartline knows the drill, too: “We do have higher expectations going into the season. You hear it every year, how every team is optimistic. I think we have reasons to be.”

As enjoyable as it is to poke fun at this annual drill, Hartline isn’t wrong. There’s plenty to be concerned about in New England, the Jets are sure to be an epic disaster, and Buffalo is starting over at each of the three major roles in an organization (GM, head coach, quarterback). The Dolphins went 7-9 a year ago, and there actually are some reasons to think Miami might be better. Ryan Tannehill probably will be better in his second year, Mike Wallace is an upgrade at wide receiver (although a severely overpaid one), and Lamar Miller is at least an intriguing option in the backfield.

Miami is looking at a lot of turnover in two critical areas — offensive line and the secondary — but Tyson Clabo is a very capable option at right tackle, and if Brent Grimes can come close to what he was in 2011, he’ll go a long way in helping fill the Dolphins’ void at cornerback. The Dolphins have their share of question marks, but so do the rest of the teams in the AFC East. The difference is that one of those teams also has …

… Tom Brady. Mike Wallace doesn’t have the best track record when it comes to public comments, but he deserves some credit here for not making the same mistake so many of us seem to make over and over. “You never want to say, ‘Oh, this happened and that happened,’ because as soon as you say that, they come back at 12-4, 13-3,” Wallace said. “You learn just to accept the Patriots for who they are.”