To Roy Halladay, With Gratitude 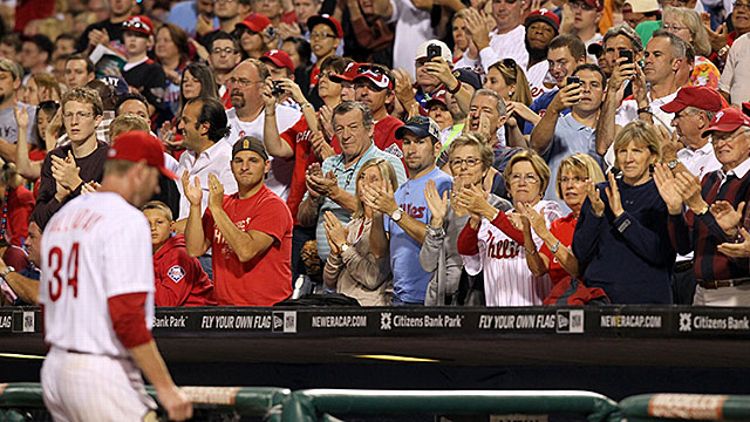 It seems so antiseptic to put it that way, but that’s what happened. And it’s a great loss for baseball.

The Halladay legend is well known. The first-round pick out of a high school in the suburbs of Denver, Halladay reached the majors by age 21, but his career fell apart in 2000, when he posted a 10.64 ERA for Toronto and was demoted all the way down to A-ball. It was there, during his Ankielian nadir, that he discovered The Mental ABC’s of Pitching by H.A. Dorfman, then recast his mechanics and returned to Toronto the next year. There, he began an 11-year run of dominance the likes of which you see once in a generation. You know the stories about his legendary dawn patrol workouts and his equally legendary bromance with his catcher Carlos Ruiz, who’d collaborate with Halladay on the two greatest pitching performances of his career.

You likely know the numbers, but let’s repeat a few. From 2001 to 2011, among pitchers who threw at least a thousand innings, Halladay …

• Tied with Johan Santana for highest ERA+ at 148

• Threw about 500 more innings than Santana, and almost 1,000 more than Schilling

• Threw more innings than anyone except for CC Sabathia, Mark Buehrle, and Livan Hernandez

• Threw 19 shutouts, tops in that period by seven

• Struck out 1,795 batters, fifth among pitchers in that span

For those of you who care about such things, Halladay’s .692 winning percentage is also the highest in that era, edging out Roger Clemens, a man some say is the greatest pitcher of all time.

I first saw Halladay up close when the Phillies traded for him in 2010. To make room for Halladay’s salary, general manager Ruben Amaro traded away the immensely popular Cliff Lee, in a deal that was roundly criticized at the time and seen by many fans as a lateral move.

Lee was then, and is still, a great pitcher, and the laid-back Arkansan’s casual confidence and postseason heroics the year before had endeared him to Phillies fans. It was hard to imagine his replacement at the top of the rotation becoming both more popular and more beloved than Lee himself.

That Philadelphia sports fans are demanding, psychotic, violent illiterates is a trope that we tire of as much as we play into. Our leading sports radio voice has spent the past 15 years waging war against Donovan McNabb, from the moment he was drafted to the present day. We ran Eric Lindros out of town for committing the crime of leading us to the cusp of a Stanley Cup, then did the same to Allen Iverson and Mike Richards. We almost did the same to Cole Hamels, and we’re another losing season or two from doing it Claude Giroux. The Phillies’ all-time OBP leader, Bobby Abreu, is, to this day, reviled for reasons I still have trouble articulating. We Philadelphia sports fans aren’t angry, or demanding, or passionate. We’re certifiable.

And yet the level of devotion that Halladay, who came to us in the twilight of his career and whose bad seasons equal the good, inspires in Phillies fans beggars belief. Halladay isn’t quotable, and he doesn’t exude a blue-collar ethic. He just showed up and allowed one run over seven innings, like clockwork, 33 times a year. His first start, Opening Day 2010, involved 88 pitches and one earned run over seven innings, and by that time he’d already sold thousands of No. 34 T-shirts and inspired Zoo With Roy, the weirdest, most passionate blog, not only in an online Phillies culture full of passionate weirdos, but perhaps in the whole of organized sports.

Two months later, Halladay, facing an anemic Marlins offense with the aid of a friendly ballpark and an enormous strike zone, threw the first perfect game by a Phillies pitcher in 46 years. He’d go on to lead the National League in innings pitched, K/BB ratio (an absurd 7.3-to-1), complete games, and shutouts, en route to his second Cy Young Award.

At age 33, he made his first career postseason appearance that October 6. First pitch was a little after 5 p.m., so I rushed from work to meet some friends at a bar to watch the game. One friend of mine showed up in the second inning and asked how things were going. I said Halladay had a no-hitter, not because I thought he’d end the game with one, but because I knew my friend was superstitious and using that word would bother him. Inning after inning, Halladay carved up Cincinnati’s lineup. With every out he recorded, he tightened the strings on this crappy dive bar in South Jersey.

I can’t imagine what it was like at the ballpark, because when Brandon Phillips dribbled out to Ruiz to end the game, the place exploded in cheers. A few dozen Phillies fans, two years removed from celebrating an actual real-to-life World Series title, burst into a fit of unabashed joy, cheering, chanting, and hugging strangers.

Every Phillies fan has a Halladay story, and that’s mine.

That moment was the high point. Halladay split a pair of decisions with Tim Lincecum in the NLCS the next week, then a year later, allowed the first batter he faced to score in the deciding game of the NLDS against St. Louis. Neither he nor Chris Carpenter allowed another run for the rest of the night. We didn’t know it at the time, but Halladay would never be Halladay again.

We’ve watched great players get old — more often now than we’d like — but Halladay was different. If there were calls for him to move on and go elsewhere to dry out and die, as there were with McNabb and Ron Hextall and Iverson, I never heard them. We hoped that we’d get the old Doc back, but after two years of fits and starts, age and shoulder injuries never allowed that to happen. Halladay came to Philadelphia after a decade in Toronto to win a World Series. He never even appeared in one.

That’s one of my two regrets — and in a bizarre twist, particularly for Phillies fans, it seemed like we failed him in that regard, not the other way around. The other is this: Roy Halladay appeared in only 103 regular-season games for the Phillies, and in that time, he made a unique mark on their fans. I regret that I can’t speak to the emotions Blue Jays fans feel for Halladay, who was excellent in the service of otherwise mediocre teams for a decade before he picked up and left for Philadelphia.

Halladay was so matter-of-factly and entirely great that it’s kind of perverse to spend so many words hyping him up. But there’s a purpose. While Barry Bonds inspired awe, Halladay inspired something different: gratitude. I’m thankful that I got to see him at his best, in person, in my team’s colors. I hope I’ll see his like again.