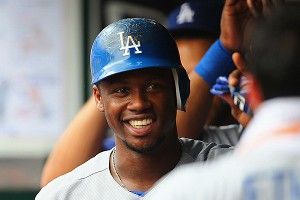 The Beane-Ballers are now 16-3 in July, and have sneaked their way into the last wild-card spot. Baltimore still has that awful run differential (-53, and -31 in July alone) and just lost a series to Tampa Bay. On paper, this looks like the weekend when the Baltimore regression begins in earnest, and it doesn’t help matters that Oakland has the pitching advantage for all three games. On the other hand, the A’s have been at least a little bit lucky, and they don’t play the games on paper. (Except, of course, at Toronto’s famous Paper Field.)

With five home runs in the past seven games, he’s the leading slugger of the week. Now I know why he looks so smug in his official photo. I also like the fact that he’s struck out 12 times in those same games. It’s the classic Babe Ruth approach: Go up and try to bash the shit out of the ball. Which probably means that he’s totally screwed on Sunday against R.A. Dickey’s knuckle-based evil.

8. This Week’s Reason to Watch the Cubs (CHC-STL)

How about the crazy two-headed monster of Jeff Samardzija and Paul Maholm, pitching Saturday and Sunday? Sam-Sam, as I call him when I don’t want to spell his last name, is coming off an amazing eight-inning, one-hit performance against the Pirates, and has allowed just five runs total in his last 27 innings. Maholm has been scorching-hot since late June, with numbers that read like they come from the biggest kid in Little League: 5-0, 0.94 ERA, 27 strikeouts to five walks, .215 opponent BA. Other than King Felix, who has been insane over the last month, Maholm has the highest WAR in the game. Both of these guys are legitimately worth watching and are a big reason why the Cubs are a surprisingly decent 12-8 in July.

7. The Once and Future King (Sunday, SEA-KCR)

He had a rough start to the season, at least by his high standards, but Felix Hernandez is making an epic charge that I’m convinced will end with his second Cy Young Award. Forget that he’s the WAR leader over the past 30 games, and that the rest of his stats are either the best or close to it in that period. Focus instead on who he’s done it against. His last six opponents, with one obvious exception, read like a nightmare: Yankees, Royals, Rangers, Athletics, Orioles, Red Sox. Against that murderer’s row, he allowed eight runs in 46.1 innings, struck out 46 batters, walked eight, and gave up a single home run while holding them to a .205 average. Taking all that into account, nobody has been even close to his level. I mean, the guy’s so good that I might actually watch a Royals-Mariners game. And that’s asking a lot.

6. Pitching Matchup of the Week That Will Definitely Happen: Sale-Darvish (Friday, CWS-TEX)

Yesterday, I wrote my magnum opus on Chris Sale and how he’s become a Cy Young contender in his first year as a starter. His numbers far exceed Darvish, but tonight he’ll have the handicap of facing that terrifying Rangers lineup. The best thing about this game is that it gives me a good excuse to skip the Olympic Opening Ceremony, which are broadcast on delay at 7:30. But it remains to be seen whether I can convince my girlfriend that watching baseball constitutes “work” rather than “choice.” I might have to stage an angry call from my editor.

5. Pitching Matchup of the Week That Might Not Happen: Greinke-Gonzalez (Sunday, MIL-WAS)

The Brewers are pretty set on dealing Zack Greinke before the trade deadline, so it’s possible he’ll either be gone by Sunday, or they’ll choose not to pitch him. But if it somehow goes down, it’s the best of the weekend. Both are top-five WAR guys in the NL, and top 10 in strikeouts. And if I had to give out my “most fun team” award today, the Nationals would win. For the record, here’s my current top five: Nationals, A’s, Pirates, Angels, Reds. Always subject to change. Bottom five, starting with the worst: Astros, Twins, Blue Jays, Royals, Marlins. And most frustrating goes to the Yankees, for their complete inability to hit with runners in scoring position. Most comical, as usual, goes to the Boston Red Sox for their hilarious use of manager Bobby Valentine.

The big three for the Angels — Trout, Pujols, and Trumbo — are finally starting to click at the same time, and Pujols’s reemergence is particularly unfortunate for other wild-card hopefuls. Since I am a Yankees fan, Mike Trout’s numbers make me want to cry, especially since Robinson Cano would be leading the MVP race without him. And Tampa? Well, it’s felt like Tampa has been bound to make a move for a long time, and thus far it hasn’t materialized. Maybe the series win against Baltimore was the start, but it’s starting to seem like maybe they are who the numbers say they are: a team slightly better than .500, but not quite good enough to snatch a wild card. The good news is that after the Angels series, the schedule looks pretty nice: Athletics, Orioles, Blue Jays, Twins, Mariners, Angels, Royals. If there’s a run to be made, it has to happen now.

A battle of divisional leaders with the best pitching matchup of the week, and it’s only no. 3? This is big-time ammo for anyone who thinks Grantland has a coastal bias. But guess what: There aren’t enough of you to matter. HAHAHA;LDFJALSDJFAS;LKDJF. No, but seriously, this isn’t Middle America hatred, I promise. Call it what you will, but outside of Sale, I find both these teams a little bit boring. Also, there’s a looming hitting crisis in Texas. Josh Hamilton (who is great but always seems on the verge of a bad meltdown) is batting .190 in the past 30 days and actually has a negative WAR (insane), but Mike Napoli isn’t much better at .196, and Nelson Cruz and Michael Young are in the midst of a total power outage. Only Elvis Andrus and Ian Kinsler are playing decently, and nobody’s playing well. The pitching has held up, but can it continue?

The second-greatest rivalry in baseball history has all kinds of playoff implications this weekend, as the Dodgers roll into the Bay facing a three-game deficit in the NL West. Remember how invincible the Dodgers looked at the beginning of the season, when Kemp was hitting the hell out of the ball and Dee Gordon was the most exciting young player in the game? Seems a long time past, doesn’t it? Now Gordon’s hurt and Kemp’s average has dropped over .100 points since returning from the DL. But the Dodgers have Hanley Ramirez and seem committed to making a run at the postseason. This will be a bear of a series, though, with three good pitchers waiting on the San Francisco side. If they can escape without getting swept, it will be an OK result. Kershaw-Vogelsong on Sunday is the one to watch.

Also, since I haven’t railed on the stupid MLB blackout policy yet, how stupid is it that nobody on the East Coast (minus the satellite people) can watch the Saturday game? Fox owns the rights to the game, but will be showing Red Sox–Yankees almost everywhere. So we should be able to watch it on our MLB packages, right? Wrong. It’s blacked out because of the competing rights. Which makes total sense for viewers thousands of miles away, unless you adhere to principles of logic. WHY DOES MAJOR LEAGUE BASEBALL HATE US???

I know people don’t love my “this is always no. 1” stance, and have their disagreements about the best rivalries in the game, but even the market supports the point. Who did Fox choose for its Saturday-afternoon Game of the Week (at least for 77 percent of the country)? Who did ESPN choose for Sunday-night baseball? They know which teams drive the ratings, even away from the East Coast and even when the stakes are abnormally low. History has its power.