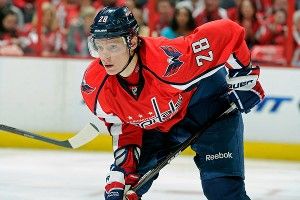 Shortly after the Carolina Hurricanes announced yesterday that they had signed free agent winger Alexander Semin to a one-year, $7 million contract, general manager Jim Rutherford released a statement of welcome to his new player via Twitter.

“We did a lot of research about Alexander,” Rutherford wrote. “Discussions about his fit with our team included coaches, players & staff.”

So much for Southern hospitality! He went on:

“Alex’s elite skill level & ability to score fill important needs, & we hope a fresh start will serve both him & our team well.”

This is a little bit like introducing a new flame to your pals with, “This is Frank. I did a lot of digging, and only a few of those rumors were true. And he’s a really good cook, so … ” But it was hardly surprising that Rutherford would want to make it clear that so much consideration had gone into the acquisition. After all, $7 million is a lot of money, and it’s really a lot of money to spend on someone like Alexander Semin, who in his seven years as a Washington Capital emerged as one of the league’s most divisive players — as talented to some as he is maddening for others. An Alexander Semin hat trick, the joke goes among Caps fans, is a goal, an assist, and an awful stick penalty (typically hooking). He’s become the poster boy for the tired “enigmatic Russian” archetype — exquisitely gifted, enormously lazy; see: Kovalev, Alex — for reasons that contain both a little bit of truth and a lot of bullshit.

Semin, who scored a career-high 84 points (including 40 goals) in 2009-10, has tallied 54 in each of the last two seasons. Last year, he scored just .27 goals per game, the lowest since his rookie year. (His career average is .42.) He began losing ice time and drifting down the Capitals’ depth chart. Broadcast analysts like Pierre Maguire roundly chastised him during games and barely blinked even when Semin made him look silly.

When Semin scored seconds after a Maguire tongue-lashing (ew) in one game against the Tampa Bay Lightning, Maguire said: “See? That’s why people are so frustrated with Semin. You see the brilliance there? And just one sequence before: haphazard.”

Semin’s biggest critics gained an ally about a year ago when former Capitals player Matt Bradley said of his old teammate: “[H]e’s one guy who has so much talent, he could easily be the best player in the league, and just for whatever reason, just doesn’t care.” (This prompted Semin’s agent to respond: “Alex always cares, no question … I know how much he cares” which in turn led to the cult Twitter hashtag #sashacares, a favorite throughout the season.)

We all know this kind of player. It’s not unique to hockey: Every sport has those athletes that Coulda Been Great, If Only He’d Tried Harder, the ones who have The Best Raw Talent I’ve Ever Seen but are also sporting No Work Ethic. To watch Semin, you can see where the fan frustration comes from: He glides, he doesn’t follow up shots, he’s not all that physical. You can say that about dozens of hockey players, really, but most of them don’t have his tantalizing upside.

Bradley later apologized with a hug and an “I love you, man,” but it didn’t matter: His comments had already done enough to legitimatize the default “He’s a bum!” grumbling of die-hard fans. “Look,” they could now allege, “even the players agree.” (It only takes one.)

By the end of this season, the rhetoric had grown even more blunt. On July 1, the first day of free agency, former NHL coach and current TSN analyst Marc Crawford called Semin a “complete loser” with “no character.”

“He’ll be banished to a place like Columbus or something like that,” Crawford said. (The Blue Jackets were all, “Wait, how’d we get dragged into this?”) “That’s what those guys do. They head to the Island of Misfit Toys.”

Days passed, players were snapped up, and Semin remained on the market. Rutherford was asked back on July 5 about whether he would pursue the “enigmatic Russian.” (Those aren’t scare quotes this time — the article actually uses the phrase!) “We would look at Semin on a short-term basis,” he said. “We wouldn’t want to get locked into anything, because we’ve all heard the stories about him. We do like his skill level.”

* * *
“Surprised Semin got a raise, not surprised he went to division rival,” wrote the Washington Post and ESPN.com’s Neil Greenberg following the deal. “Also surprised he gave a quote for press release — I took under 2 words.”

He was (half) joking, I think, but it’s true — one of the more intriguing things to come out of the Semin signing yesterday may not have been the deal’s terms, or that after a month of free agency someone finally gave him a look. It was the statement he made. (Let’s suspend disbelief and set aside the probability that it was one of his people.) Although he’s been communicating with coaches and teammates for years, it wasn’t until the start of last season that Semin began giving tentative interviews in English.

“It’s a great fit for me,” Semin said yesterday. “I look forward to playing with great players and putting together a winning season.”

Yes, it may have been the Platonic ideal of a Wonder Bread–bland athlete comment, but it boggled the mind nonetheless. Nate Ewell, who for years was the PR guy for the Capitals, was particularly impressed. “I knew [Canes PR man] @MikeSundheim was good, but getting a 28-word quote in that release is damn impressive,” he wrote.

The impressive @MikeSundheim was busy doing something that you rarely see — giving a glimpse into the front-office logic behind the signing. “No secret that most teams use analytics these days in looking at acquisitions,” he wrote. “The Canes are among them.” He then went on to post a series of Semin’s percentile rankings in various categories over the past four years: goals, points per 60 minutes in “high-pressure situations” (defined as a tied game in the second period, a tied or one-goal-differential game in the third, or overtime), and plus/minus adjusted for “team strength” (for the times in which Semin was playing against the other team’s top talent).

Semin looked great by all these metrics, of course; presumably, the ones by which he did not were left on the tweeting room floor. And while several analytical hockey writers (better known as “the #fancystats crowd”) questioned the predictive powers of a few of these bespoke statistics, they were admittedly intrigued.

The Hurricanes’ framework showed what many of them have argued: that Semin’s mal reputation is colossally overblown; that far from being a one-dimensional, “selfish” offense-only guy, he’s actually a legitimate two-way player; that he does help his teammates; that his shot percentage from last season is likely to rebound going forward; that if he weren’t Sasha Semin from Russia and were instead, say, Al Simmons from Saskatoon, he might be looked at differently. (Or if he were Zach Parise, who has played 31 more career games and scored two fewer points.)

Semin, interviewed in Russian following the Caps’ ouster from the playoffs in seven games to the Rangers (a series in which he managed just one assist), unknowingly summarized the whole debate in his own words: “Was this series a bad one?” he asked. “Yes, result-wise it was, but if I look at the way I played, I don’t think I was that bad. I could even say I played rather decently. I don’t know what everybody else thinks, but I think if you create chances, if you work hard …

“But of course, if you don’t score, that just means you’ve got to work harder.”

(The interview also includes him talking about his summer retreat in Russia — “lots of bears wandering around” — which is my cue to make sure you check out THE BEAR CAM if you haven’t already. OK, moving on … )

For Carolina, the question becomes whether he can or will “work harder,” whatever that means these days. But while the acquisition seems expensive for the Hurricanes, in many ways it comes with very little cost. The team isn’t in danger of hitting the cap; on the contrary, they were still below the minimum floor before signing Semin. The one-year deal gives them plenty of flexibility. If things go well, they’ll have the first shot at re-signing him long-term, and if things end badly, we’ll agree never to discuss this again. (If the results are middling, there’s always the potential that a playoff-bound team will want to give Semin a run as a trade deadline rental, in which case the Canes could at least get a prospect or pick for their troubles.)

The signing is the latest in a series of savvy and aggressive offseason moves for the Hurricanes, who after winning the Cup in 2006 have been struggling of late just to make it into the playoffs. They resigned several roster players last season rather than risk them testing free agency, and Rutherford made a big splash at the NHL draft when he traded Brandon Sutter for the Penguins’ Jordan Staal, a move that pairs Staal with his brother Eric in Carolina and instantly changes the complexion of the team.

Now, with Semin, their upside is even greater, and the biggest downside I can think of, really, is that we’ll see more of this indisputably embarrassing side of him:

Hopefully his new Staal-brother teammates will put a prompt end to that. After all, they’re the only ones who like beating up on their brother.