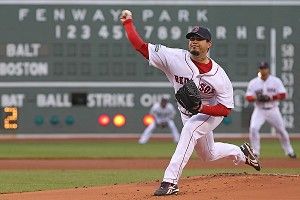 Let me make my case for Zack Greinke as an All-Star. Bear with me, because I’m going to use a revolutionary stat-comparison technique, where I take certain key stats of Greinke’s and match them up against the rest of Major League Baseball. So, compared to every other qualified pitcher in the game, Greinke is: Second in FIP. Second in WAR. Hell, how about we just stop there? By two of the most reliable overall pitching metrics, he’s the second best pitcher in baseball. Good enough, right? No? Does the All-Star Game just have one pitcher now? They’re only inviting Justin Verlander? Ah, you need more convincing? OK: Ninth in HR/FB rate. Third-lowest HR/9 rate. Top 20 walk rate. Top 20 strikeout rate. Top 20 fastball, top 10 two-seam fastball, enough.

Bottom line? Tony La Russa is haunting us from the grave. Snubbing Greinke might be the worst All-Star decision ever. It’s certainly top five. Seriously, how often does the second-best pitcher in the game, who does everything really well, not make the team? Anyway, he is scheduled to start Saturday against the Houston Astros (who are still waiting for their hitting license to come through from the government) with a chance to make La Russa look like even more of an idiot. I hope he’s vicious.

You know how a Mig was a Soviet airplane in the movie Top Gun? And in real life, probably? What if we started calling Miguel Cabrera “The Soviet Airplane”? It’s the best kind of nickname: totally confusing and stupid. I knew a guy in Brooklyn who was an expert at that kind of thing. He gave me the nickname “fry guy” after seeing me eat French fries one time. Then he called me “fry guy” all the time until everyone we knew thought I loved French fries, and I finally had to be like, yeah, fine, I f—ing love fries. So, back on point — The Soviet Airplane is 14-25 with three home runs, three doubles, five walks, and a sick .560/.613/1.040 line in his last seven games. That’s very good. As with last week, I’m not sure it justifies watching the Kansas City Royals, but at least you’re informed.

Jason Hammel has been sneaky-good for the Baltimore Orioles this year, especially for a 29-year-old with a very, very average career in his rearview, and he’ll have a chance to up his public profile a bit against Jered Weaver, the AL ERA leader at 2.13.

The more interesting Saturday duel, it has to be said. Speaking of which, “it has to be said” is my favorite British soccerism, as employed by the great Ian Darke. It typically goes along with something mildly negative, but it’s so damn devastating. “Fernando Torres is not having his best year, it has to be said.” Without the last part, you’d take the statement at face value; Torres is doing OK, not great. But add in “it has to be said,” and it’s clear he’s a disgrace to himself and his country. Brits are so subtle, so cutting.

Meanwhile, something strange is happening in Pittsburgh. James McDonald is one of many guys having the best year of his life, and they’re going to make it to the All-Star break without fading like we expected. Guys like A.J. Burnett are lighting it up, and they’re winning a lot of close games. Team of destiny? We’ll see. And while the BABIP and FIP stats show that Ryan Vogelsong is due for a correction, he’s having a hell of a year so far, with a 2.26 ERA and seven wins.

We’re not quite done with the Giants. If I told you that Tim Lincecum would have the second-highest ERA among qualified pitchers at the All-Star break, would you have expected the Giants to be neck-and-neck with the Dodgers in first place? What if I told you Melky Cabrera was going to be a starting f—ing outfielder at the f—ing All-Star Game? Sorry, I probably didn’t need to swear there, but my god, he’s a top-20 offensive player. He’s batting .354. His OBP is almost .400. His BABIP is a very high .392, so a coming-to-earth moment is imminent, but for now, it angers the Yankees fan in me who watched him do what I would call “not this” for what seemed like a decade. My theory is that he stole Lincecum’s soul, or something. Poor Tim is expected to face A.J. Burnett on Sunday, just one start removed from getting crushed by the Nationals.

Admit it, you read that subhead and just assumed I meant the Red Sox, right? The PR people in Boston have done a bang-up job claiming ownership of the word “Sox,” to the point that the Chicago version should almost think about changing its name. It’s the biggest PR failure since Earvin “Magic” Johnson and Bill “Magic” Laimbeer went head-to-head for Magic rights in the ’80s. Fine, that didn’t happen. But the other Sox are under the radar in an even more important way — they’re dominating the AL Central. With a run differential of +61 (third-best in baseball), a true ace in Chris Sale (10-2, 2.19 ERA, 3.5 WAR, set to start Sunday until the Sox skipped him to rest for the second half), and four dudes destroying baseballs (Adam Dunn, A.J. Pierzynski, Paul Konerko, Alex Rios), Chicago is a scary playoff matchup for anyone. It’s time for them to stop flying under the radar, elevate to radar level, and maybe, one day, actually go over the radar. But that might be dangerous.

4. I love you, Robinson Cano

Check out the FanGraphs batting splits for the past 30 days. Notice the man on top? Robbie Cano, with a .381/.440/.762 line, 12 home runs, and (hey!) 10 walks. I submit to you, the baseball fan, that Robinson Cano has the most beautiful swing in the game. He’s been my favorite player for years now, and I like to think I’d still have a deep fondness for him even if he weren’t a Yankee. But the Achilles heel with Robbie (every announcer’s favorite pick for a future batting title winner) is his lack of selective hitting.

He’s a natural-born killer at the plate, but the thing that’s kept him from going through the ceiling is a low walk rate — around 5 percent, most years. That’s Vlad Guerrero territory, and not a place you want to be. For comparison’s sake, the leaders this season are at just under 20 percent. The result was too many easy outs, lower numbers against quality pitchers, and struggles in the playoffs, when Cano was too easily tempted. Also, his OBP was basically equivalent to his average, diminishing his value. But he’s doing better this year. Not great, but better — for a free swinger like him, a walk rate near 9 percent is quite the improvement. If that pattern continues, I’m telling you that he’ll light the whole American League on fire. There is nobody like Cano when he’s hot.

Surprisingly, the third-best all-around series of the weekend after Orioles-Angels and a series to be named later. Both squads are right in the thick of the playoff hunt, a handful of games above .500, but both have some serious challenges ahead; for the Rays, it’s a loaded AL East that will be difficult to navigate, and for the Indians it’s a -27 run differential that hints at bad times to come.

You know how I’m always kvetching about that stupid MLB blackout policy that keeps me from seeing Nationals and Orioles games here in North Carolina, hundreds of miles away? Well, I’ve got some really good news for baseball fans — this weekend, I’m going up to D.C. to see Stephen Strasburg and Gio Gonzalez pitch live on Friday and Saturday. Oh wait, I guess that’s just good news for me, and not for baseball fans. But in the end, isn’t that what really matters? (The bad news is that if MLB finds out I’m from North Carolina, they’ll make me wear a blindfold during the game.) Anyway, shall I list Strasburg’s and Gonzalez’s accolades once more?

These are probably the two most exciting pitchers in baseball, and they happen to be pitching back-to-back for the same team this weekend. I got some $5 tickets off StubHub, and if you don’t think I’m going to be using a lifetime’s worth of stealth techniques to get closer, you’re crazy. (By the way, you’re not hearing it quite yet, but get ready for a lot of talk over the second half about Strasburg’s innings limit, and whether Nats manager Davey Johnson will keep him out of the playoffs.)

The greatest rivalry in sports always gets top billing, even when every Yankees starting pitcher apparently angered a vengeful witch, and the Red Sox just got swept by Oakland. It doesn’t matter. It’s Yanks-Sox at Fenway. There is nothing better.

NOT ON JULY FOURTH WEEK, GUYS. NOT NOW. This is America’s time! You can file an appeal to my friggin’ bicep, where you’ll find a henna tattoo of Abraham Lincoln riding a dolphin named John Wayne and kicking the crap out of a communist hyena. And guess what? Appeal denied.