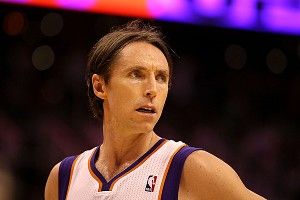 The Los Angeles Lakers made noise on the Fourth of July when they acquired Steve Nash from the Phoenix Suns for four draft picks. Can they work, as presently constructed, on the offensive end?

Why It Will Work: Steve Nash’s pick-and-roll play will improve everyone’s game.

Even at the age of 38, Steve Nash is still a tremendous pick-and-roll point guard. Last season, pick-and-rolls accounted for 60 percent of Nash’s possessions, and the people who believe Nash won’t get his teammates involved on offense don’t have to worry. With the Suns, he was more of a passer than a scorer in these situations, passing it to a teammate 62 percent of the time.

The key to Nash’s pick-and-roll passing is the ability mix up his targets: According to Synergy Sports, Nash hit the roll man 45.8 percent of the time while he hit a teammate spotting up 47.5 percent of the time. Nash is difficult to guard because he reads and exploits the defense deftly.

He makes quick and decisive choices on each play. If the defense collapses on him in the paint, he’ll kick it to the corner for an open catch-and-shoot. If the corner options are covered, he’ll find the man rolling to the rim.

Nash will elevate the whole team’s pick-and-roll game, hopefully including Pau Gasol. Last season, he performed very poorly both when popping out or rolling to the rim (he prefers popping out, which he did 65.2 percent of the time). Gasol posted a PPP of 0.778 on 39.3 percent shooting, placing him in the 20th percentile among all NBA players. He relies on the delivery of the basketball.

Gasol’s efficacy depended on when he got the ball. If he could go up for the shot quickly, he usually knocked it down, but that didn’t happen often enough. Far too often the Lakers’ point guards couldn’t draw the defense’s attention, failed to execute the pass, or took too long to get it to Gasol. Nash will be the key to solving these problems.

Nash can help make Andrew Bynum more effective too. Last season, according to Synergy Sports, he registered just 34 possessions in which he set a screen and rolled to the rim. Bynum may seem like a poor roll man, but again the Lakers’ point guards struggled to take advantage of his strengths.

Unlike Gasol, when Bynum sets a screen, he goes straight to the front of the rim (something he did 70.6 percent of the time) and he’s pretty tough to stop. But for him to be truly effective, he requires a lob pass. If those lobs aren’t timed correctly, he won’t score. And if the ball handler coming off Bynum’s ball screen doesn’t command a hedge, he’s not going to be able to clear room for Bynum’s thundering rolls to the rim. Nash clears up all these problems, so we should see Bynum in the pick-and-roll more often with devastating effect on the defense.

The most important question about Nash is, of course, how he will play with Kobe Bryant. While Nash uses Gasol/Bynum ball screens, Bryant is going to get a lot of open looks. He spotted up just 5.7 percent of the time last season, and only nine of those 99 possessions were spot-ups coming off a pick-and-roll between two of his teammates. Bryant made four of those nine shots (44.4 percent), but the sample size is too small to be meaningful. However, we can look at Bryant’s catch-and-shoot numbers. On these opportunities, Bryant shot 51.3 percent, but he was rarely open — just 35.2 percent of the time. Nash should get that percentage to rise for Bryant.

Why It Won’t Work: Kobe and Nash will struggle to coexist.

Steve Nash might never have the opportunity to run the pick-and-roll. Both Nash and Bryant have thrived with the basketball in their hands, and both will have to make significant changes in the way they play and the number of possessions they start with the ball in their hands. The chart below shows the percentage of time when Nash and Bryant are the primary ball handlers on a possession.

The numbers don’t match up. Nash will have more possessions where he dumps the basketball into the post (to either Bynum, Gasol, or Bryant) or where he gets it to Bryant in the corner. Bryant will have more possessions where he is spotting up on the wing as Nash comes off ball screens. The problem is that as both make adjustments, they will make themselves less effective. I foresee the biggest problem coming in fourth quarters. Nash always plays the game the same way, looking to get the best shot available. Bryant is the opposite, relying on “hero ball” to get the job done. It will be interesting to see who wins out the first time they are down one with 20 seconds left.

This isn’t going to be easy. Bryant and Nash won’t mesh right away. But both are consummate professionals looking to win a ring, and they will figure things out eventually. It’s just going to take 20 or so games.