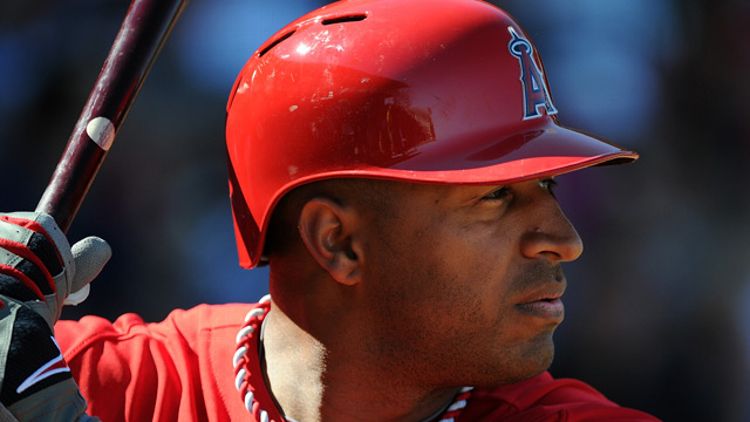 Whacked by news that Phil Hughes and Derek Jeter will likely join Alex Rodriguez, Curtis Granderson, Mark Teixeira, and Michael Pineda on the disabled list to start the season, the Yankees are reportedly on the verge of acquiring Vernon Wells from the Angels.

As a straight baseball deal, the impact here will be minor, with the potential to be downright damaging. Wells has been terrible since the Angels traded away Mike Napoli to get him, hitting .218/.248/.412 and .230/.279/.403 over the past two seasons. He could conceivably be an upgrade over in-house options like Juan Rivera and Brennan Boesch, if only because he can hit lefties, and because Juan Rivera and Brennan Boesch are bad at baseball. But the Yankees will reportedly cover $13 million of the $42 million remaining on Wells’s contract, a stunning move, given New York’s iron-clad insistence on ducking below $189 million in payroll next season. Meanwhile, the Angels put a bunch more bucks in their pocket without losing anything of value, in the process partially suppressing the memory of one of the worst trades in recent baseball history. (By dumping Wells and the four years and $86 million left on his contract on the Angels after the 2010 season, Jays GM Alex Anthopoulos instantly became eligible for the Nobel Prize in every category, as well as sainthood.)

We’ve already beaten up on Wells, and especially on the Yankees, plenty around these parts. We should probably expect the Yankees to win 80-something games this year, and some other team to win the AL East. Vernon Wells isn’t changing that.

What we can do is evaluate Wells within the context of other famous Vernons. A Sunday afternoon Twitter debate, combined with several hours of research, netted a working list of prominent real-life figures and fictional characters who go by Vernon or some derivation thereof. To be thorough, the list was expanded to include people with the last name Vernon, as well as places named Vernon. The final goal was to produce a Vernon Power Rankings that was both analytically grounded, and wildly subjective/borderline offensive. If we missed someone good, or you object to this list with the fire of a thousand suns, feel free to excoriate us in the comments below.

Bonus Ranking: After LaSalle’s Tyrone Garland hit a patented “Southwest Philly Floater” to launch no. 13 seed LaSalle into the Sweet 16 Sunday night, he gave a shout-out to “my cousin Vern.” Of course he did. (Well, OK, “Bern.”)

30. Vernon Dursley
Harry Potter’s uncle was a cruel man who made the aspiring wizard sleep in a tiny crawl space under the stairs. Though he gets high marks for being one of Harry’s earliest comedic foils, Dursley showed so little regard for his nephew’s well-being that he once hoped aloud for Harry to meet his end at the hands of Dementors.

29. Vernon, British Columbia
I’m sure Vernon, B.C., has its charms. But I only got to experience this south-central British Columbia town once, and it was not a fun experience. Working as a summer camp counselor 30 minutes away, I accidentally slashed my hand open with a pocket knife one night while attempting to cut an apple for my campers. After losing about 100 liters of blood (possibly an exaggeration), someone grabbed me and rushed me to Vernon, site of the closest hospital. Waited four hours for stitches. The stitches were more or less made of barbed wire — it was actually more painful to have them removed than to put them in, and that’s saying something.

27. Verne Troyer
Troyer would’ve garnered much higher marks just for his portrayal of Mini-Me in the Austin Powers movies, maybe even top-five status. But Troyer’s first name is actually Verne. We’ll allow his entry, but deduct major points for not actually being a Vernon.

26. Richard Vernon (actor)
This distinguished British film and TV actor appeared in everything from Goldfinger to the BBC TV and radio adaptations of The Hitchhiker’s Guide to the Galaxy.

24. Chris Vernon
Memphis-based host of The Chris Vernon Show. He makes the list because he’s good at what he does, and because if I don’t include him, recently hired Memphis Grizzlies front office muckety-muck John Hollinger will no doubt write some sort of algorithm proving that my gimmicky power rankings and Simpsons references are well below replacement level.

23. Vernon, Connecticut
Located about an hour and a half from Boston and a little over two hours from New York City, Vernon is a popular stop on that drive, cited by several New Englanders for being the home of the excellent Rein’s Deli. Quality pastrami always warrants inclusion.

22. Edward Vernon
An 18th-century English naval officer, he earned the nickname “Old Grog” for wearing a grogham coat. Seeking to fend off scurvy for himself and his crew, he concocted a drink made of beer, rum, and lemon and lime juices. Today, grog is a catch-all term for all kinds of alcoholic beverages. Drink origin stories always warrant inclusion.

21. Vernon Gholston
The sixth overall pick in the 2008 NFL draft, Gholston has been a bust in the pros, spending three disappointing seasons with the Jets, then getting picked up and released by both the Bears and Rams in a matter of days. There’s a good chance he’s played his last NFL game, though with $21 million in guaranteed money from his initial five-year deal, he’s probably doing OK.

20. Vern Tessio
Jerry O’Connell’s character in Stand by Me would rank higher if not for his decision to marry right out of high school and become a forklift driver at a local lumber yard, a respectable life path but one easily bested by O’Connell’s real-life marriage to Rebecca Romijn, not to mention his appearance as “Kid at Beach” in Police Academy 5: Assignment Miami Beach.

19. Vern Ruhle
A 17th-round pick in the 1972 MLB draft, Ruhle defied the odds and spent 13 seasons in the big leagues. He later served as pitching coach for the Astros, Phillies, Mets, and Reds.

18. Vernon Wells (baseball player)
He’s a three-time All-Star who looked like a future superstar early in his career. But that unfortunate seven-year, $126 million contract will probably be his legacy, barring gigantic future playoff heroics, or similar. Which is a kind of a shame, really; he’s not the one who handed out that hideous deal.

17. William Vernon
A New England trader who built and outfitted ships for the Continental Navy during the American Revolution.

16. Mickey Vernon
This 20-year MLB veteran made seven All-Star teams, spending most of his career with the old Washington Senators. In his final season, at age 42, he had eight at-bats with the 1960 Pirates. Let’s go ahead and assume he got a World Series ring and full playoff share after this happened.

15. Vern Law
Unlike Mickey, Vern Law actually played a significant role in the 1960 Pirates’ success, winning 20 games and nabbing a Cy Young award that season. The best part of his bio, though, is his flair for nomenclature. Vern and his wife VaNita had five sons: Veldon, Veryl, VaLynda, Vaughn, Varlin, and Vance, with Vance enjoying an 11-year big-league career himself.

14. Richard Vernon (fictional)
Paul Gleason played the detestable Principal Vernon in The Breakfast Club, the movie character who’s a top 10er in the separate “Why didn’t he hire someone to do that job for him?” Power Rankings, given he chose to piss away his entire Saturday with Judd Nelson, Molly Ringwald, and the rest of the crew for no good reason.

12. Verne Lundquist
The divisive longtime CBS announcer is probably best known for his call of Jack Nicklaus’s famous putt at the 1986 Masters and for being a frequent punching bag for Bill Raftery during college basketball broadcasts, including Raftery’s “You’re getting old” zing during first-round action last week. My gracious, why taunt someone who recently professed his love for Woolworth on the air?

11. Vernon Jordan
This D.C. rainmaker first gained prominence as a leading figure in the civil rights movement. He served as part of Bill Clinton’s transition team after Clinton won the presidency in 1992.

10. Vernon Johns
Dr. Martin Luther King Jr.’s predecessor as pastor at Dexter Avenue Baptist Church in Montgomery, Alabama, from 1947 to 1952, Johns was one of the most prominent early leaders of the civil rights movement.

9. Vernon Chatman
He’s a TV writer, producer, actor, and stand-up comedian. But all you really need to know about Chatman is that he’s the voice of Towelie on South Park. If some semblance of objectivity weren’t a factor in these rankings, he might be no. 1.

8. Mike Vernon (goalie)
This 19-year NHL veteran was the starting goalie for two Stanley Cup–winning teams, playing in a total of four Stanley Cup Finals and winning the Conn Smythe trophy as most valuable player of the 1997 playoffs.

7. Justin Vernon
The lead singer for indie band Bon Iver left the group six months ago. “I really feel the need to walk away from it while I still care about it,” he said at the time, which is about the indiest thing a singer could say as he stomps on the hearts of his devoted fans.

5. Vernon Davis
One of the top tight ends in the NFL, Davis was the author of “The Grab,” one of the most celebrated catches in recent playoff history. He’s also such an avid curling fan that he was named honorary captain of the Men’s U.S. Olympic Curling team for the 2010 Winter Olympics in Vancouver, which frankly makes all the football stuff pretty damn irrelevant.

3. John Vernon
Reasons for John Vernon being so high in these Power Rankings:

E. He was born in Zehner, Saskatchewan.
D. His real name was Adolphus Raymondus Vernon Agopsowicz.
C. He appeared in the first Dirty Harry movie, The Outlaw Josie Wales, the Mission: Impossible TV series, and the Hitchcock movie Topaz.
B. He played Dean Wormer in Animal House, one of the greatest characters in one of the greatest comedies of all time.
A. Dean Wormer’s first name was also Vernon.

2. Mount Vernon, Virginia
Yes, yes, it was the childhood home of George Washington — even Canadians know all about the Washington lore and the first President’s connection to Mount Vernon. But so many apocryphal stories come with the Washington legend that we’re forced to relegate his Northern Virginia hometown to second place. Damn you, cherry tree.

1. Vernon Reid
The founder of hip-hop/hard rock/funk/heavy-metal band Living Colour was one of the most influential musicians of the ’80s and early ’90s, and one of the best guitarists of his generation. He’s played with Public Enemy, Mariah Carey, Mick Jagger, the Roots, Santana, B.B. King, and many others. Teenage Jonah saw Living Colour open for the Rolling Stones on the Steel Wheels tour, with Reid and his fellow band members upstaging Mick and Keith. Go listen to Cult of Personality, then come at me, bros.

About Last Weekend: It's a Mad, Mad, March Madness World