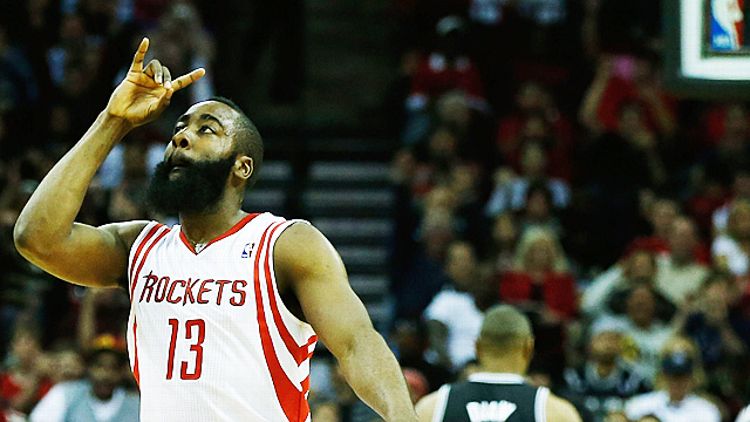 Usually, this is the time of the NBA season that I associate with tanking and resting stars. But for a variety of reasons, I feel like the league has a little bit of madness this month. Whether it’s teams jockeying for playoff position (pretty much the entire Western Conference), teams trying to keep streaks alive (Denver, Miami), or teams just trying to prove that the entire season wasn’t a waste of time (Washington, D.C.), there’s a lot passionate play going on right now. It’s bleeding over into the crowd, too. The Toyota Center was kind of rocking for the Spurs-Rockets matinee yesterday. And the basketball … oh, my god, the basketball.

All those caught passes; all that ball movement; all those sets starting and finishing within a mere 24 seconds (sometimes even less!); defensive rotations, floor spacing that looked like a Risk board, post-moves; glass cleaning; and everyone could go left or right (with the exception of Jeremy Lin). I know, I know. If I don’t like college hoops, I don’t have to watch. This is America; this is a place where Stephen Jackson can have a rap career, and I’m free to change the channel at pretty much any point I want. But seriously, after watching dudes falling on the court like they had banana-peel sneaker soles, defenders slipping underneath ball handlers to draw cowardly charges, seeing dudes build monuments to blind gods with all the bricks they were putting up, bounce their dribbles off their feet, and have their coaches call three timeouts in 70 seconds only to draw up a 30-foot Hail Mary shot in the final possession … well, it sure was nice to watch some professionals.

This must be a pretty powerful streak if it’s making me find D-Wade charming.

This happened over the weekend, and technically does not fall under the “last 24 hours” boundary of this series, but I need to say this: I am really rocking with John Wall right now. I LOVE A GOOD EJECTION. I know the Wizards basically lost this game because Wall — who is playing some of the best ball in the league, and probably the best ball of his young career right now — got tossed. But I really like the idea that, after being on the receiving end of one too many hard fouls from the Warriors’ Klay Thompson, Wall decided enough was enough, shouting, “Go to the basket and I swear to God, I’ll knock your [EXPLETIVE] out.” Here’s some exclusive video of Emeka Okafor and Jan Vesely after the game …

5. The Proposed Amendment for Dudes to Stop Doing This

This is amazing. It was amazing when LeBron did it …

But it’s late March. Stop doing this. Keep calm and carry your body into the playoffs without an MCL strain because you tackled a bro who just one $20 thou.