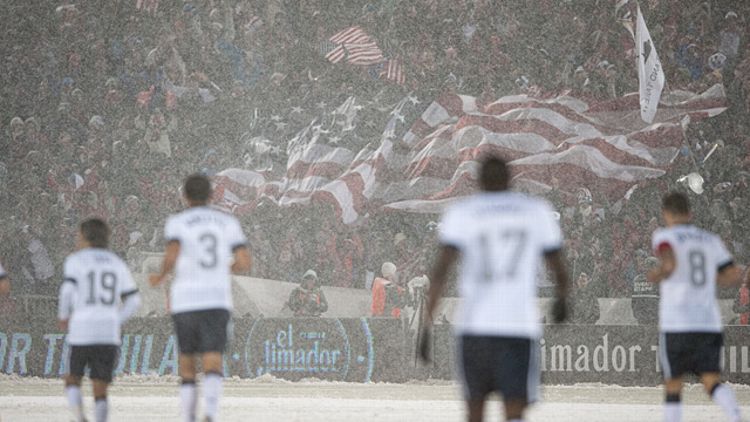 Panic is mostly a matter of perception. The situation before the United States men’s national team took the field at Dick’s Sporting Goods Park on Friday night was this: With eight matches remaining in a 10-game tournament, the Americans — who hadn’t lost a home World Cup qualifier since 2001 — were a single point out of second place in the six-team Hexagonal. They were playing at home in front of nearly 20,000 pro–Stars and Stripes supporters including 2,000 American Outlaws, the largest contingent ever. Jurgen Klinsmann’s team was favored. Hardly a dire predicament.

And yet, the general mood in the reactionary, overblown world of U.S. soccer was that it was time to freak out. The sky was falling, ever faster after a midweek article in the Sporting News cited 22 anonymous sources who spoke about the coach’s lack of, well, coaching, and factions within the squad. The mood was tense. The red, white, and blue — down four fullbacks and their no. 1 goalkeeper, no less — were in trouble.

Except they really weren’t. The team was following the same script it had been all along. It included a bit more drama, perhaps, but it was always going to need to beat an inferior opponent in Colorado. The CONCACAF World Cup qualifying recipe calls for wins at home, and a couple good results on the road. Last month’s loss to Honduras in San Pedro Sula hurt, but more because it was a missed opportunity than because it significantly damaged its qualifying chances. That being said, the Americans needed all three points on Friday. And that’s exactly what they got. In a driving snowstorm that nearly, and perhaps should have, cancelled the proceedings, the U.S. beat the Ticos 1-0 thanks to Clint Dempsey’s 16th-minute goal.

Apologies, that would be captain Clint Dempsey. After controversially leaving long-time captain Carlos Bocanegra off the roster, Klinsmann surprised the masses and handed the armband to the Tottenham attacker instead of the presumed captain-in-waiting Michael Bradley. It was a curious decision because Dempsey is not exactly what you’d call a vocal leader. If he leads, it’s by example. But the Texan has something that a U.S. team that is searching for an identity desperately needed: the confidence (arrogance?) to believe he is the best player on the field at all times.

The clearest sign of this came barely a quarter-hour into the game. Dempsey, 40 yards out, took the ball down and ripped a shot at goal. It didn’t go anywhere close to Keylor Navas’s net, but it didn’t matter. That was his fiery prematch speech. Thirty seconds later, Dempsey found a deflected Jozy Altidore shot bouncing toward him in the box. There was nothing to prevent the 30-year-old from scoring the only goal the Americans would need, a tally that gives him 12 in World Cup qualifying and ties him with Landon Donovan for second all-time.

As the snow continued to fall and the heroic grounds crew struggled to keep up, the game slowed. Salvadorian referee Joel Aguilar momentarily called the match in the 55th minute before relenting to pressure to keep going from both sides. (Costa Rica, ridiculously, is protesting.) The game continued and neither side could link passes, although Bradley, somehow, managed to connect on almost 90 percent of his efforts. He and Jermaine Jones communicated better in the middle of the field or perhaps, given the disjointed nature of the affair, were simply able to occupy space effectively as individuals. Whatever, it worked. DaMarcus Beasley, pressed into duty at left back, looked excellent starting his first U.S. match since June 2009. Herculez Gomez and Graham Zusi provided some much-needed width on the wings, Omar Gonzalez and Clarence Goodson paired well in central defense, and Brad Guzan didn’t make any major mistakes in net. There were a few nervy moments, and it certainly would have been nice if the Americans had bothered to score a second goal, but they earned the three points they needed.

That result, combined with draws in Friday’s two other World Cup qualifiers, vaulted the Stars and Stripes from sixth to second in the Hexagonal. If nothing else, that fact alone proves the absurdity of the prematch standings-related panic. It will continue to be a tight tournament. If the home team wins all the remaining games — which almost certainly won’t happen but still provides a nice test case — the U.S. will be second on 15 points behind Costa Rica’s 16. Jamaica, Mexico, and Panama will have 14, and Honduras last with 13. Eight games remain.

On Tuesday, the Americans play another one against Mexico in Azteca where they are 0-5-1. Any pressure — perceived or real — is gone. No one expects the U.S. to win or even tie. The squad will be without Jones due to an ankle injury, but will be otherwise intact as Bradley, Dempsey, Zusi, and Maurice Edu all avoided picking up yellow cards in Denver. Mexico, with two draws in its first two matches, is the team that is desperate for a victory against its biggest rival. Jose Manuel “Chepo” de la Torre, not Klinsmann, is the manager in trouble, and the local papers aren’t afraid to say so. It’s the type of game where the Americans, who frequently play up to the competition, could shock the world.

Still, I suspect that this isn’t the last we’ve heard of the Klinsmann Kontroversy. The U.S. will slip up again on the road to Brazil and the knives will come back out, especially for assistant coach Martin Vasquez. NBC analyst Kyle Martino said what most people think, which is that the former Chivas USA head is “in over his head.” But for now at least there’s no need to panic. It’s amazing how quickly a win can alter perception.