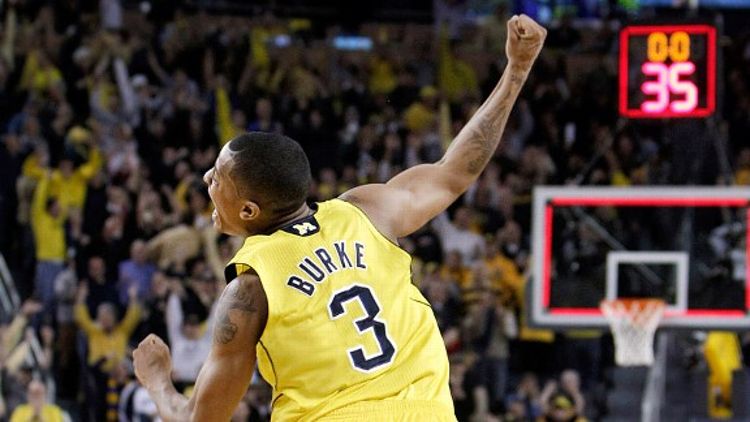 I’m coming out with the big guns today: Trey Burke is the most exciting player in college basketball.

You want caveats? OK. Trey Burke is the most electric, dynamic, breathtaking human being wearing a Division I uniform, and Tuesday night he etched his name into Michigan lore with a 20-point virtuoso turn in a 60-59 home win over rival Michigan State. Also, he’s the coolest customer on the court at any given time, and he’s only a freshman.

Oh, I’m sorry. I guess those weren’t caveats. Maybe if you want caveats, you should go visit your local COWARD CENTER.

Alright, alright, I’m cooling down. I promise not to shout again before I get some food in me. Don’t go visit your local coward center. Most of them shut down in the ’70s anyway. But I’m not backing down from the italics. It was that kind of night.

I understand I’m under a spell here. I know Trey Burke is not the best player in college basketball. Hell, the list of finalists for the Wooden Award came out this week, and he’s not even in the final 25. Three other freshman — Indiana’s Cody Zeller and Kentucky’s Michael Kidd-Gilchrist and Anthony Davis — were included ahead of him. Judging by that same list, he’s also not in the top four in Big Ten Player of the Year consideration. So consider yourself caveat-ed.

I’m just a dude with a computer, and all I know is that whenever I watch Burke play, I’m on the edge of my seat waiting to be amazed. He gives me that old Jason Williams vibe. I’m not talking about White Chocolate or the guy who shot his limo driver. I’m talking about the man who goes by Jay and calls games on ESPN these days — the former Duke point guard who remains the most thrilling player I’ve ever seen in person. In 2001-02, he was bottled excitement, the kind of player who gets your legs shaking and makes watching live basketball seem like a religious experience. I still watch the Miracle Minute about once a month, and my favorite part is the expression on the Maryland players’ faces as they collectively try to ignore the fact that they’re on the wrong side of an epiphany.

Trey Burke is no J-Will. Not yet, anyway. But he’s got the same DNA: the quickness combined with the preternatural ability to beat bigger men to the rim and finish, the accuracy from long range, the incredible court vision. He’s the whole package, and if he stays long enough, there’s no doubt in my mind that he and coach John Beilein will lead Michigan to the Final Four in a year or two.

Tuesday’s game was an instant classic, a great installment in the ongoing Wolverines-Spartans rivalry that culminated in a frenetic finish. It deserves a lengthier breakdown. Michigan controlled the game until a Michigan State surge evened things up with about six minutes remaining. Keith Appling was everywhere during that stretch, willing his team to climb the long comeback trail, longer still in the face of the deafening crowd at Crisler Arena. They played level for the last five minutes, and a nice defensive stand on the final play preserved the one-point win for Michigan.

But the real story here is Trey Burke, and to ignore that would be absurd. It’d be like writing about the Golden Globes and not mentioning Ricky Gervais. Without Burke, there is no Michigan win. He did a little bit of everything: 20 points, 4 rebounds, 3 assists, 2 steals, 2 blocks. And he did it when it mattered, with huge 3s and timely assists in the clutch to stem Michigan State’s momentum and preserve the win.

What’s that? Did I make a highlight video for y’all? Oh, I made a highlight video. I made the hell out of it. Here are his points, a few assists, a couple blocks, a steal, and even a hockey assist. It ends with the game-winning rebound, drive, and dish.

Before you ask, no, I’m not a professional video editor. I just have the feel.

It’s hard to pick out a quintessential moment from that reel. The sequence starting at :38, when he got a hockey assist, a steal, and a layup, is pretty awesome. So is the ridiculous bomb at 2:03, especially when you consider that it came at the end of a 16-2 Spartan run that gave the visitors their first lead of the game (and let’s not ignore the great call from Mike Tirico: “Nothing going on … except talent!”). And then, of course, the end, with the gutsy fast break and assist for the win. How many point guards would have the courage to rush downcourt in that situation, rather than play it safe and call timeout? Few, I think.

That’s the thing about Burke — he’s absolutely serene on the court (to the point that Tirico claimed his facial expression never changes), but he’s got a pair of cojones ferreas. Both of those traits are unique in a freshman (or anyone, really), and are much harder to teach than the concrete skills. It allows a talented player to become transcendent under pressure, and after last night, Burke’s name should resonate nationally. With Burke and incoming recruit Mitch McGary set to lead the Wolverines back into the upper echelons of the game, Beilein is the envy of the coaching circuit.

So what chance does Burke have in the freshman of the year race? Clearly, his biggest rivals are Zeller, Kidd-Gilchrist, and Davis. I think we can agree that Burke is the fourth name that belongs on the list, so let’s start in the Big Ten and compare Burke and Zeller with the help of our friends from StatSheet.

This is a radar chart comparing six basic stats between Zeller and Burke. (You can see the exact numbers by hovering your cursor over the line.) From these stats, the race looks just about even. Both are averaging just about 14.5 points per game, and each leads in the categories you’d expect: The 5-foot-11 Burke has more assists and a better assist-to-turnover ratio, while the 6-foot-11 Zeller has more rebounds and blocks. But what about the advanced stats?

These numbers show Zeller is a little more valuable than Burke. He scores more often, gets to the line more often, and has a higher offensive value by almost every standard. Even if we included assist percentage in the mix, which we probably should, Burke doesn’t make up enough ground. It’s not even as close as I would have hoped, which indicates just how efficient Zeller has been for Indiana. These stats don’t measure defense, where Burke excels and Zeller still has room to improve, and they don’t measure the effect each player has on facilitating the offense, where a point guard’s impact is usually greater. But they’re definitive enough, for now, to indicate that Zeller is the Big Ten Freshman of the Year.

But it’s always difficult to compare a guard to a center. How does Burke look next to Kentucky’s Kidd-Gilchrist?

Pretty interesting, right? Burke leads in the assists category, which is probably unfair because MKG looks to score more than pass, and Kidd-Gilchrist leads in floor percentage — a measure of how often a player scores when he touches the ball — which is probably unfair because Burke facilitates more as a point guard. Other than that, the two are neck and neck, with Kidd-Gilchrist enjoying a minuscule lead in every category (and his lead in turnover percentage, of course, is an advantage for Burke). The big difference is free throw rate; Kidd-Gilchrist gets to the line significantly more often, and it gives him a slight edge over Burke.

While we’re here, we’d might as well look at the comparison between Zeller and Davis:

Incredibly close. The race for freshman of the year will come down to how this chart looks at the end of the season.

But Burke’s numbers are only part of the equation. Emotion factors into his appeal, and last night’s wizardry against the Spartans will go down as one of the most memorable shows of the regular season. He might not be the best freshman in the country, but today he’s the most fascinating.