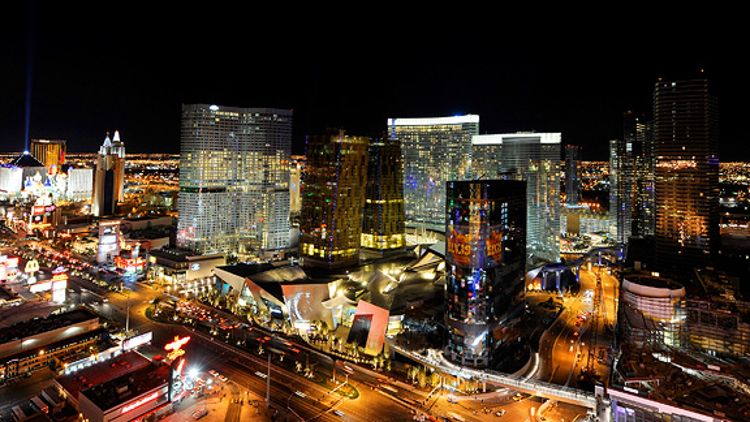 In my opinion, the Aria casino has the best sportsbook in Vegas. It’s a lofty honor, because it’s really not hard to create a fun time when you combine sports with betting, televisions, and drink service, and there are a lot of places on the Strip that manage to do so rather beautifully. In the end, picking a favorite becomes more about personal taste than about something absolute.

Take the sportsbook at Caesars Palace, for example, which ran a close second to the Aria book for me this year. I was at Caesars on Saturday for the Divisional Round games, and it was perfect for the Saints-Niners game. As a vast expanse of space that’s easy to walk by and get caught up in, the crowd for the game kept growing, to the point where the rows of people standing behind occupied seats looked to go more than ten deep. With each big play during the fourth quarter, the shouts from the crowd got more people to walk over from the slots and the table games to check out what was happening. By the time Vernon Davis caught his now-legendary touchdown pass, it felt more like being in a section of a stadium or a really large sports bar than sitting in the middle of a casino.

If Caesars is like being in the best possible sports bar, Aria is like being in the best possible living room for a day of football. It’s not anywhere near as big as Caesars, and it attracts less of a crowd by virtue of being off the main gaming floor, but it’s more comfortable and modern. Most casinos have leather seats, but Aria’s are bigger and swankier, with little coffee tables, adjoining loveseats, and larger couches that can seat up to three. The smokiness that can permeate some of the best books in town isn’t as frequent in Aria, since the smokier crowd that populates the race book is in the corner, facing the opposite direction. Most books from older casinos, like the Mirage, were built with horse racing bettors in mind first and sports bettors as a secondary market. Having been built in 2008, Aria’s one of the very few books where sports betting is the clear priority in both layout and space, with about three times as much space for sports as there is for racing.

What makes the Aria book, more than anything, is their televisions. There are 137 televisions in the Aria sportsbook and adjacent sports bar under the control of sportsbook manager Raphael Esparza, and they’re the best-looking available at any of the books I’ve seen in the city. Put it this way: You know a book has good televisions when the managers of other sportsbooks are jealous of them. The number of TVs means that Aria can show just about every single sporting event that anyone would care to bet on during even the busiest days of the year. The biggest game of the moment gets the star treatment on two enormous, stadium-size televisions as well as piped-in audio.

Drink service can be a little erratic when the book is humming, but that’s to be expected in such a dense space. The good news here is that you can pay for drinks with cash as opposed to needing a drink ticket, which makes life much easier. Of course, you can still get drink tickets by betting $125 on sports or $20 on the ponies. There’s also a bar just outside the book, and the sports bar next door has a to-go window that allows you to place an order during one commercial break and then pick it up during the next set of commercials without missing a play. It is far easier to sit at the Aria sportsbook for an entire afternoon than it is virtually anywhere else in the city.

In the end, Aria’s the top book because it does more things right than anyone else. The Hilton might have more futures bets. Caesars might be bigger. The Wynn might feel more opulent. The Aria can compete with all of them, though, and it takes second place to nobody on comfort, food and drink accessibility, and television quality. You’ll need to get there early on a Sunday morning to guarantee a couple of seats, but it’s well worth it.

Thanks to New England’s dominant win over Denver and Baltimore’s struggles to put away Houston, this line was briefly at 8 points on Sunday before it settled in at 7.5. The total has moved up ever so slightly, opening in 49.5 in some of the bellwether books and bouncing up to 50.5 as of Tuesday night.

The issue in handicapping this game is the classic “one week vs. many weeks” debate. If this had been a game at the end of the regular season, the Ravens would never be getting more than a touchdown here; if anything, the line would more likely be 6.5 or so. Because of what just happened this past weekend, though, the line’s moved over a key number and is likely to stay there. So, as a handicapper, how much do you weigh the past week’s performance in judging a team’s level of play? We clearly don’t have the right answer, but without any dramatic change in team health, why would Baltimore be a significantly different team from the one that won 12 games during the regular season?

This one moved wildly on Sunday, as the Wynn opened the line at 49ers -1. One offshore book got enough action to make the Niners a 1-point underdog for a brief time, but enough action eventually came in on San Francisco to push the line up to 2.5 points, where it’s stayed since Sunday night.

When these two teams faced off in Week 10, the 49ers started the week off as 3-point favorites at -125 and took action as the week went along, ending up as 4-point favorites in most places. That won’t happen here because the casinos would get cooked by people trying to get a middle over the key number of 3, but it wouldn’t be surprising to see the Niners get boosted up to -3 by game day.

On the other hand, that total is going to keep falling. It opened at 42.5 or even 43 in most places, but San Francisco is expected to take on rain from Wednesday through Sunday, with a fair amount of wind during game day on Sunday. That would seem to favor the Niners, but then again, how will that affect a 49ers team that’s so dependent upon field goals?

As the season goes on in Vegas, punters have had the option to bet on the generic Super Bowl matchup by picking one conference or the other. Because the NFC held what appeared to be two or three of the best teams in football, a typical bet for most of the year would have allowed you to take whoever the AFC representative was as a 4.5-point underdog.

Well, that changed after this weekend. With the Packers and Saints both losing, the line shifted dramatically toward the AFC, where the conference’s top two seeds are still alive. The generic Super Bowl bet now has the NFC as a 4.5-point underdog, which presents the opportunity for a fantastic middle. If you bet AFC +4.5 and take NFC +4.5 now, you can win both bets if the game finishes with a margin of four points or less, regardless of who wins. You can also choose to bet on the NFC representative, who will likely be at +140 or so, and guarantee yourself a profit while middling in the case of a 1-to-4-point win by the NFC team. Hooray for free money!