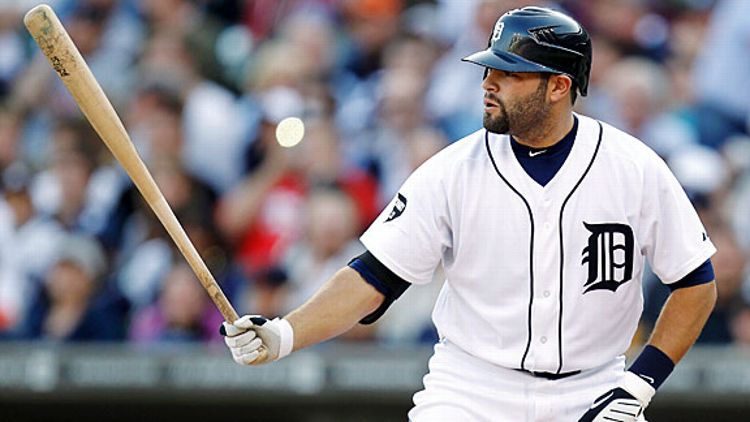 There are several reasons why Justin Verlander is getting more MVP love than any pitcher in years. Going 23-5 with a 2.36 ERA helps. So does playing for a winning team that’s exceeded expectations.

But maybe the biggest reason Verlander’s the biggest media darling since Shannon Stewart (circa 2003) boils down to the convoluted way in which MVPs are often chosen: He seems to have fewer great teammates than any other candidate on a contender. The Tigers are being painted as a mediocre team that Verlander carried to glory.

Which is a big, steaming pile of wrong.

It’s certainly true that Verlander has been the best pitcher on the Tigers staff by a wide margin, Jose Valverde’s wildly overrated saves streak notwithstanding. But Detroit’s offense has caught fire this year, surging to fourth in baseball in runs scored. Hold a gun to the head of Verlander backers and they’ll grudgingly admit Miguel Cabrera had another great year. You might even get a few hat tips for Victor Martinez and his (also somewhat overrated) .323 batting average. But no one else seems to get much credit. Which is a shame, given the stellar seasons put up by two unlikely heroes: Alex Avila and Jhonny Peralta.

Avila, a fifth-round pick out of the University of Alabama, played just 151 minor league games between the 2008 and 2009 seasons before getting his first cup of coffee in the majors. He showed impressive power in his 72 plate appearances in 2009 — whacking five homers and four doubles. It was a small sample size but an intriguing one, coming after posting a .185 ISO (Isolated Slugging: slugging percentage minus batting average) that year in Double-A. With only the catatonic Gerald Laird standing in his way, Avila won the starting job with the Tigers in 2010. He didn’t embarrass himself but didn’t win any rabid fans either, hitting .228/.316/.340.

This year, though, he’s gone nuts. Earlier this week, Avila blasted a two-run, pinch-hit, game-tying homer in the ninth inning, bringing his season line up to .301/.392/.527. He leads all full-time catchers (sorry, Mike Napoli) in batting average, on-base percentage, slugging percentage, and every advanced stat known to man, and sits a tick below Miguel Cabrera among Tigers position players with a 5.5 Wins Above Replacement. It’s tough to pinpoint a cause for Avila’s monster breakout. Most elite major league players foreshadow their future success by impressing enough scouts to warrant a high draft pick, kicking ass in the minors, or both. Avila did neither. He simply earned an everyday job, then suddenly became an All-Star. He probably won’t ever again duplicate his sky-high .369 batting average in balls in play this year. But a lefty-swinging catcher with legitimate power and patience who won’t turn 25 until January is an invaluable asset. Jacoby Ellsbury and Alex Gordon are the only AL players who’ve improved more in the past year than Avila.

Peralta’s performance has been nearly as impressive — and as unlikely. Signed by the Cleveland Indians as an amateur free agent out of the Dominican Republic at age 17, Peralta was regarded as a premium hitting prospect with an iffy glove. He quickly made good on that reputation, smoking 61 extra-base hits in his first season as an everyday player while struggling afield. That was six years ago. Although Peralta remained an above-average hitter at the offense-starved shortstop position in subsequent seasons, he couldn’t approach his huge 2005 numbers. Meanwhile, his range became so limited that the Indians made him a third baseman by age 27. The Tigers acquired him at last year’s trade deadline, in the midst of one of his worst seasons. A single pitching prospect seemed a reasonable price to pay for the hope that Peralta might start hitting again.

And he has. As with Avila, Peralta has benefited from a high (.333) BABIP, the second-highest mark of his career. But there have been signs of real skill progression, too, with Peralta cutting his strikeouts to career-low levels while moving to the brink of his first 20-homer season in three years. Something curious has happened with his defensive numbers, too: they’ve been downright respectable. Depending on which metric you prefer, Peralta has either been just below average or solidly above average with the glove this season. Split the difference and call him middle-of-the-pack and you’ve still got the third-most valuable shortstop in the majors in 2011, behind only Troy Tulowitzki and Jose Reyes.

If you think this is the year a pitcher deserves to win the AL MVP award, great. Verlander’s been close enough to Ellsbury and (if you believe, as I do, that great players on noncontending teams deserve consideration) Jose Bautista that a couple more dominant starts could make him a perfectly reasonable candidate.

But the idea that Verlander is the only Tiger on a team full of kittens is pure fiction, and not just because Thundercats-style man-feline hybrids don’t really exist. When Detroit goes for its first World Series title in 27 years this October, save some credit for Avila and Peralta, the two stars no one saw coming.