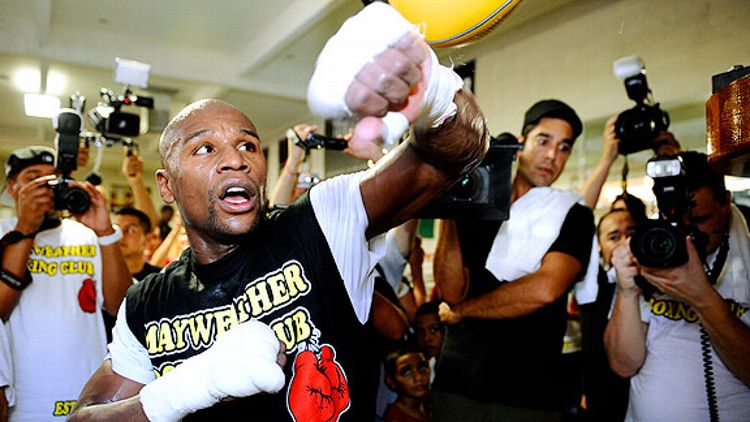 The two most marketable boxers in the world are also the two best boxers in the world. If that were the end of the statement, it would mean that we’re living through a rare moment in boxing history. But that’s not the end of the statement. These two boxers, who are a tier above whoever is no. 3 at the box office and whoever is no. 3 on the pound-for-pound list, have one more thing in common: They compete in the same weight class. This is beyond rare. This is, arguably, unprecedented.

But there’s a problem: Manny Pacquiao and Floyd Mayweather aren’t fighting each other. Mayweather is taking on Victor Ortiz this Saturday night. In November, Pacquiao is set to face Juan Manuel Marquez for a third time. They’re both decent fights. Unfortunately, if our two protagonists win — and they’re expected to — it won’t make them any more likely to meet in ring.

And if the two best and most bankable boxers alive should somehow never face each other, it would be the greatest failure for the capitalistic boxing business.

Pacquiao-Mayweather has been the most clamored-for fight in the sport since December 6, 2008, when Pacquiao dominated a heavily favored Oscar De La Hoya. Here we are in September of 2011, still waiting.

It once seemed inevitable that the megafight would come to fruition, and even after negotiations failed in January 2010 and again that summer, there remained reasons to believe: Too much money is on the table for the fight not to happen. Conservatively, each fighter stands to make $40 million. Fifty million dollars is by no means unrealistic. It has to happen.

But it hasn’t. So maybe we need something unconventional. You want to see Pacquiao versus Mayweather? Root for Ortiz to win Saturday night. Better yet, root for Ortiz to beat Mayweather by controversial decision. (Hey, boxing judges, you told us Paul Williams beat Erislandy Lara, Devon Alexander beat Lucas Matthysse, and Felix Sturm beat Matthew Macklin, all in a span of 14 days this summer, all in high-profile pay-cable fights. Surely, you can screw up one decision at a time when long-suffering fight fans might actually stand to benefit from a robbery, right?)

Why would Mayweather’s losing, particularly in disputed fashion, be a good thing? Because there’s never been a fighter as fervently protective of his undefeated record. Mayweather’s all-consuming need to remain undefeated is the greatest obstacle preventing him from committing to a fight with Pacquiao.

Nearly every time Pacquiao’s name comes up in an interview, Mayweather points to the losses on their respective records as evidence of his superiority. In May 2009, ESPN’s Brian Kenny interviewed Mayweather and found himself the interviewee, answering a slew of rhetorical questions:

“Have Pacquiao been knocked out twice?”

“Have Pacquiao been outboxed by Erik Morales?”

When Kenny mentioned Shane Mosley as a possible future opponent, Mayweather dismissed the notion with, “Shane Mosley who got five losses, that’s the one you’re talking about?”

In his infamously slur-studded, September 2010 Ustream rant, with the heat over Mayweather’s “ducking” Pacquiao intensifying (this was soon after Mayweather adviser Leonard Ellerbe mysteriously claimed “no negotiations have ever taken place” after a series of lengthy negotiations failed to produce a fight), the 41-0 Mayweather again played the loss-column card. “I stepped up to the plate 41 times, and we’re not worried about nobody. Like I said before, Poochie-ao got three losses and two draws and been knocked out twice.”

Most recently, in the very first scene of HBO’s reality series 24/7: Mayweather-Ortiz, Floyd yelled to the camera: “You tell me one athlete, right now, that’s been dominating the game for 16 years straight without a loss. Tell me one! Tell me just one!”

Mayweather has even used his zero and Sugar Ray Robinson’s corresponding 19 to make the case that he’s the greatest fighter of all time. (Robinson retired with a record of 175-19-6, but was 128-1-2 at age 30, with the one loss coming when he was outweighed by 16 pounds against fellow Hall of Famer Jake LaMotta.) How much of that is self-promotion and how much is delusion is up for debate. But clearly, Mayweather, 34, sees his undefeated record as the lynchpin of his legacy.

“I had this conversation years ago with Floyd,” former HBO Sports president Seth Abraham recalled. “It wasn’t even about Pacquiao, it was something else. Mayweather believes that at the end of his career, if there is still a zero at the end of his record, he will be one of the five greatest fighters of all time. That, to him, is more important than $30, $40, $50 million to fight Pacquiao. In reality, if he beat Pacquiao, he would be in the conversation about the greatest of all time. Without Pacquiao, he’s not in that conversation. Floyd doesn’t see it that way.”

Mayweather brilliantly slips and parries missiles in the ring, and he has acquired a reputation for ducking and dodging them to equal effect in his matchmaking. That knock, however, is only partially deserved. As a junior lightweight and lightweight from 1996 to 2003, he fought pretty much everyone the fans asked him to fight, including Genaro Hernandez, Angel Manfredy, Diego Corrales, and Jose Luis Castillo, all of whom were rated among the top two in their divisions at the time. In the past seven years, Mayweather has fought some of the biggest names of his generation, including De La Hoya, Mosley, Marquez, Ricky Hatton, and Arturo Gatti. Along the way, there have been four noteworthy opponents who Mayweather could have fought but didn’t: Kostya Tszyu, Antonio Margarito, Miguel Cotto, and Pacquiao. Tszyu, Margarito, and Cotto all lacked the star power of the boxers Floyd fought instead. That’s not to excuse Mayweather for avoiding that trio, but he’s hardly the first boxer to spend the early stages of his career proving himself and the later part cashing in. And Mayweather’s supporters would be correct in noting that Tszyu, Margarito, and Cotto all got knocked out shortly after Mayweather elected not to fight them, which allows them to claim that he would have destroyed them all anyway.

Pacquiao is different. He’s the guy who brutalized Margarito and Cotto while Mayweather sat on the sideline. Mayweather can’t claim superiority over him without establishing it directly.

That Mayweather doesn’t seem interested in doing so doesn’t mean he’s afraid of Pacquiao. It doesn’t mean he believes he would lose to the Filipino marvel. It just means he recognizes that he could lose to Pacquiao. And why make $50 million against a guy you’re kinda-sorta confident you’ll defeat when you can make $25 million to fight guys you’re absolutely certain you’ll defeat?

That brings us to Ortiz, who logic tells you must be facing long odds if Mayweather selected him as an opponent. At the MGM Grand sportsbook, Mayweather is a -600 favorite. So what chance does Ortiz have of handing him that controversial-decision loss that would set our Pacquiao-Mayweather plan in motion?

Ortiz (29-2-2, 22 KOs) is in his physical prime at 24, making him the youngest opponent Mayweather has faced in more than a decade. Ortiz fights out of a southpaw stance, and Mayweather did struggle in one of his six fights against southpaws, needing five rounds to figure Zab Judah out. Ortiz can punch, as evidenced by his claim that he’s knocked down every opponent he has ever faced. (The claim is difficult to prove, as boxing is not a stat-heavy sport and exact information on fights that weren’t televised often doesn’t exist. It is probably hokum, but the fact that Ortiz can even attempt to get away with it tells you he has serious punching power.) And Ortiz is driven. He overtly surrendered in a spectacular slugfest with Marcos Maidana two years ago, was labeled a “quitter,” then carried with himself an eff-the-world intensity when he overcame two knockdowns to upset Andre Berto this April and earn the Mayweather date.

Counterbalancing all of that is the simple fact that Mayweather has sublime skills and Ortiz does not. Ortiz has a tendency to square his shoulders, which will make it easy for Mayweather to pop him with right hands, either as leads or as pull-counters fired in quick-trigger response to Ortiz’s jabs. Speaking of the Ortiz jab, it doesn’t get used often enough. According to CompuBox stats, he threw only 10.5 jabs per round against Berto; the welterweight average is 25. Attempting one jab every 17 seconds is no way to steal close rounds against Mayweather.

Realistically, if Ortiz is to win this fight, he won’t only need help from the judges; he’ll need an off-night from his opponent. And he might get it. Mayweather hasn’t fought in 16 months. His career also includes a 21-month retirement and 10 separate between-fight gaps of six months or more. The last boxer to gain this much attention for frequent periods of inactivity was Ray Leonard, whose career included 14-, 19-, 27-, and 35-month hiatuses, and that’s not counting the six-year break that preceded his disastrous final fight against Hector Camacho. But it’s Leonard’s second-to-last fight that’s worth examining here. He was 34. He hadn’t fought in more than a year. His opponent was Terry Norris, a heavy-handed 23-year-old with a few blemishes on his record who was just beginning to emerge as a force. Leonard got knocked down twice and lost a wipeout decision.

Mayweather is a different case. Unlike Leonard, he hasn’t seemed to lose a step in his most recent fights before turning 34. (Mayweather won 23 of 24 rounds against Marquez and Mosley, whereas Leonard struggled to a draw against Tommy Hearns and in a thoroughly unimpressive decision over a 38-year-old Roberto Duran.) But boxers grow old overnight sometimes, and it has been 504 overnights since Mayweather’s last bout. Prime against prime, Ortiz has only the clichéd “puncher’s chance.” If Mayweather is a full stage past his prime, Ortiz looks far more dangerous.

Winning on points probably isn’t the most likely scenario for Ortiz. But this is the sport in which one man bit off a chunk of another man’s ear and was permitted to continue until he’d bitten the other ear as well. So let’s entertain the unlikely scenario. Here’s the full sequence of events: (1) Ortiz wins a decision debatable enough that it doesn’t knock Mayweather far down the pound-for-pound list; (2) a rematch is hastily arranged, and a bitter and determined Mayweather knocks Ortiz out emphatically to reestablish himself as one of the two best boxers alive; (3) Mayweather no longer has a perfect record and realizes he must now defeat Pacquiao to prove he’s one of the all-time greats; (4) Pacquiao vs. Mayweather gets signed for the spring or summer of 2012.

Sure, the fight would lose some luster following that sequence of events. Those $50 million paychecks might be out of reach. After all, Mayweather’s undefeated record isn’t just a prop he relies on when spouting about his legacy and deciding whom to fight. It’s also a marketing tool. That zero at the end of his record is part of what makes a possible fight with Pacquiao the richest in history.

But if it takes a loss to Ortiz to force Mayweather into the ring with Pacquiao, then so be it. The fans don’t share in the profits. They just want to find out who truly is the best fighter of this generation.