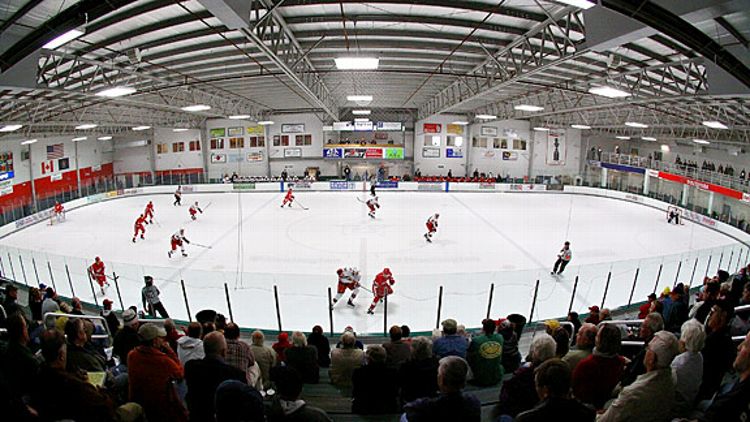 Outside the Centre Ice Arena in Traverse City, Mich., a man talked on his cell phone and described the scene inside the rink.

“You should see them,” he said. “They all walk in together and they all wear the same thing. They’ve got on these jackets with the team logos, and slacks. They’re all glued to their BlackBerries and phones. These guys, they can’t stay in one place for even 10 minutes. They’re always looking around.”

It was, I thought as I eavesdropped, an apt description of the eight teams’ worth of hockey hopefuls gathered in the beautiful lakeside town in northwestern Michigan for the 2011 NHL Prospects Tournament, a five-day exhibition of players who could someday be the league’s future stars.

But the man wasn’t talking about, as everyone refers to them, the kids.

“These scouts, they’re like, all former players,” he continued. “None of them can sit still.”

In the days before the start of NHL training camps, which get underway this weekend, there are several tournaments and single exhibition games held around North America to showcase, scrutinize, and scout young league prospects.

The longest-running and largest is the Traverse City NHL Prospects Tournament, which was started in 1998 by a Detroit Red Wings organization so good — it had just won two straight Stanley Cups — that throwing its rookies in to fend for themselves against decorated veterans at team-wide training camp didn’t seem like the most effective way to assess their potential and talent.

Instead, the Red Wings invited three other teams up to their training facility in the pinky finger of Michigan to field petit squads for a round-robin tournament that would be slightly more apples-to-apples, competition-wise. The expansion Nashville Predators won the inaugural tilt with a prospect roster that included their 18-year-old, second-overall draft pick, David Legwand, now 31 and the franchise’s all-time scoring leader.

Since then, the field has expanded from four teams, to six, and now to eight: besides the Red Wings, the Buffalo Sabres, Carolina Hurricanes, Columbus Blue Jackets, Dallas Stars, Minnesota Wild, New York Rangers, and St. Louis Blues all send rosters of recent draft picks and young, unsigned free agents. No one is older than 23; many players are barely 18. Behind the bench, typically, are the head coaches of each franchise’s AHL affiliate, which makes sense because that’s where most of the best of these players will end up this season.

When it comes to scouting, drafting, and player development, the NHL has a whole lot more in common with MLB than, say, the NBA. It is not at all unusual for even the most treasured of picks to clock serious time in the minor leagues for one, two, or three-plus years before cracking the bigs. Legwand, as an example, appeared in only one NHL game in the Predators’ first season. And notably, a number of players from the 2006 and 2007 Rangers rosters in Traverse City, guys like Marc Staal, Ryan Callahan, Artem Anisimov, and Brandon Dubinsky, played together in the AHL Hartford Wolf Pack (now known as the Whale) for a spell, and now, after a summer of contract extensions, comprise the Rangers’ young, playoff-caliber core.

There are exceptions to the waiting game, of course, most incredibly that of the Jeff Skinner, 19, last year’s seventh overall pick by the Hurricanes who made a splash in Traverse City, tying the Rangers’ Derek Stepan with seven points in four games. What’s craziest is what happened next: Skinner made the NHL roster, scored 31 goals on the way to 63 points, ended up being named as an All-Star Game injury replacement, and earned the Calder Trophy as Rookie of the Year. (Stepan, no slouch himself, made the Rangers roster and finished the season with 45 points in all 82 games.) It was an unbelievable run by a man who, with a freckled babyface, hardly has the appearance of an imposing professional athlete.

That’s true of many of the players in Traverse City. Sure, in their NHL jerseys, most of them look the part on the ice. They’re tall, some of them really tall, like 6-foot-6 type of tall — and that’s before they’ve even put on their skates. (Rangers goalie prospect Jason Missiaen stands 6-8; behind him the net looks like a poorly made prop.) They are fast and physical enough that when they come barreling into the boards near the corner where the Zamboni doors open, there’s an instant where it seems like they might actually crash right on through.

When they’re off the ice, though, milling around eating bananas or bagels with peanut butter and awaiting their game time in their T-shirts and shorts, many of the players could pass for someone’s younger brother. One young St. Louis Blue standing around in his droopy long johns looked so much like a child in jammies that I half expected to see a buttoned-up butt flap when he turned around. It’s eye-opening to see just how young so many of them look and are; and it’s at once thrilling and sad: They might be world-class hockey players, but they’re still just kids with something to prove.

And while some of them — Buffalo’s Zack Kassian, Columbus’ Ryan Johansen — play like men among boys, others look like boys trying hard to be men. I’m not an anti-fighting zealot, but in light of this sad summer (and in particular memory of Derek Boogaard, who played in Traverse City in 2001 and 2002) it’s difficult to watch some of the players try to prove themselves through pugilism. It’s one thing for two veterans to fight in a heated, late-season NHL rivalry game, and another to see two boys throw tentative fists in a rookie tournament because they think it will get them some looks.

On the other end of the spectrum, and of their careers — the Danny Woodersons of the rink, although balder — are the guys looking: the scouts and the coaches and the franchise execs, the ones who just can’t sit still. These faces are grizzled, scarred, and eminently recognizable: At every whistle during one Rangers game early in the tournament, fans tiptoe up to Rangers assistant GM Mark Messier for an autograph, please?

Adam Graves is there, too, with the Rangers, behind the bench, while a host of other players of the NHL ’93 type of vintage are scattered around. There’s Joe Nieuwendyk, Dallas GM; there’s Chris Chelios and Kirk Maltby, who both now work for the Red Wings. John Davidson, who once upon a time called the Rangers games that Messier and Graves played in and once upon a time before that was a player himself, is now the president of hockey operations for the St. Louis Blues. Rod Brind’Amour and Ron Francis are employed by the Hurricanes.

And it’s not just that former players end up working in hockey; they also beget more hockey players, and the cycle continues. Any professional sport has its share of family legacies — the Barrys, Alous, and Mannings of the world — but in hockey the bloodlines seem to run particularly thick, and Traverse City was dotted with “isn’t that …?” names on the backs of jerseys.

The Carolina Hurricanes’ prospect squad included both Brody Sutter — his family is to hockey what the Kennedys are to Hyannis — and Jordan Jared Staal, whose three brothers are all top NHL talents. (Staal’s jersey says “J. STAAL” because his older brother Eric, an All-Star, also plays for Carolina.) The Red Wings’ young Landon Ferraro is the son of sniper Ray, while Brock Beukeboom’s surname doesn’t exactly leave you guessing, thought it might make you feel old.

Leave it to the NHL to hold a prospect tournament with the feel of a retrospective. The hockey community remains perhaps the most close-knit (and occasionally tangled) of any in sports; its ultimate prize, the Stanley Cup, is a heavy reminder of that with its decades’ worth of etched names, some of which belong to players, like Pavel Datsyuk and Henrik Zetterberg, who have gone through Traverse City.

In the championship game between the Buffalo Sabres and the New York Rangers alone, three of the seven goals scored were by NHL progeny. (The Sabres won the title, 5-2.) The Rangers’ Ryan Bourque, son of you-know-who, converted a pass from Christian Thomas, son of Stumpy. (One player with perhaps the best chance to make the New York roster this season is defenseman Tim Erixon, son of former Ranger Jan.) Luke Adam, whose father Russ played in only eight NHL games but who played in NHL games nonetheless, wore the C for Buffalo, netted the opening goal, and played on one of the tournament’s finest lines alongside Marcus Foligno and Kassian.

And when Foligno scored, I heard one scout behind me wonder if he would do his father Mike’s trademark leap. He didn’t. Like his older brother, Nick, who plays for the Senators, he must be saving it for his first NHL goal one day.