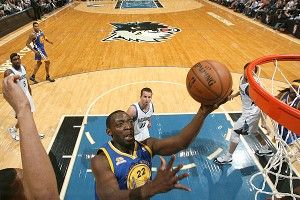 The Warriors beat the Timberwolves on Sunday. Andris Biedrins (NWT: concussion), David Lee (DNP: the stuff that gets up around the side of condoms), Nate Robinson (DNP: 24/7 was on) and Dorell Wright (DNP: Scramble With Friends) all took the night off. After the game, Warriors coach Mark Jackson said, “[The players] deserve all the credit,” clearly passing the blame for a second-half collapse that saw Golden State claw back from a 21-point deficit. With the win, the Warriors dropped to eighth in the Unibrow Sweepstakes. To retain a real shot at keeping their draft pick, the Warriors need to finish with one of the seven worst records in the league. As long as they lose their last two games, Golden State’s 23 wins should finish in a tie for seventh with either Toronto or New Jersey, who both have 22 wins, but face one another Thursday night. The problem? Golden State’s last two games come at home against the Hornets and the Spurs, two teams with no incentive to win.

The Hornets have been playing their best basketball of the season and nearly beat the Clippers at Staples Center on Sunday, but another victory would take them out of the coveted Tankonia Top Three and into a three-way tie with Cleveland and Sacramento, neither of which seems particularly interested in winning basketball games right now. A win Tuesday would cut New Orleans’s chances of landing The Unibrow in half. Meanwhile, if the Warriors win Tuesday, their chances of retaining their lottery pick are all but toast.

In last week’s Tankonia primer, we called Tuesday the Super Bowl of Tanking. It certainly has lived up to all expectations. There’s a chance the Hornets have strictly forbade tanking and will trot out Eric Gordon. But it’s hard to imagine anyone would approve such a move, especially given the added value Anthony Davis would immediately bring to the franchise. The Hornets, as noted before, have been playing hard down the stretch. They’ve earned the right to tank the last two games. The Warriors, on the other hand, have been openly and gleefully tanking for 20-plus games now. Given the stakes and the potential PR disaster of a season in which you promise to make the playoffs, whiff on every free agent, amnesty Charlie Bell to make room for DeAndre Jordan, trade a popular player for an injured one, tank without any concession to modesty or decency and then screw up tanking, there’s no limit to what the Warriors might do to lose this game and the next.

Golden State activated coach Mark Jackson into a player/coach role and signed former second-round draft pick Marc Jackson to take his place on the bench. They also signed that big inflatable mascot that used to dance during timeouts at Oracle.

Even if that Warriors roster can get through and lose Tuesday’s game, is there any guarantee that they’ll lose to a Spurs team that has already clinched the no. 1 seed in the Western Conference? Thursday, April 26, is Fan Night at Oracle Arena. The game will be televised nationally. Tim Duncan, Manu Ginobili, and Tony Parker will almost assuredly not play. There’s a chance that Danny Green, Tiago Splitter, and Kawhi Leonard take off most of the night as well.

It’s hard to imagine that the Warriors, even without Lee, Wright, and Nate, could lose to both the Spurs and the Hornets. This is why tanking was a bad choice in the first place. Yes, there is a way to defend every move the Warriors have made this year, but only if you look at the situation in the starkest, most polarizing way possible. Yes, they were never going to win the championship this year. Yes, they weren’t going to win with Monta and Steph in the back court. This does not mean the team had to (a) tank when tanking might not be mathematically possible, (b) trade Monta for diminished value while taking on salary. There are other solutions that don’t leave you in the embarrassing position of having to out-lose your last two opponents in front of your home crowd. If the Warriors do, indeed, lose, they most likely would finish tied for seventh. Marcus Thompson of the Contra Costa Times has laid all the percentage chances for the Warriors to retain their pick, and it still doesn’t really look all that pretty. Even if the Warriors lose out, they most likely would have to win a coin flip to retain their coveted no. 7 position. Given the team’s history, seems like much less than a 50-50 proposition.