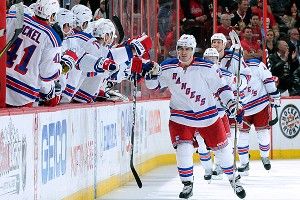 So did you hear the one about the NHL playoff series that went according to script?

No, you didn’t, because this year, that isn’t happening. The favorites are struggling, the underdogs are winning, the dynasties are imploding, and a bunch of guys you’ve never heard of are dominating. As a wise man once said, everything is happening. And nothing makes sense.

The Vancouver Canucks, with the best record in the league, were eliminated by the 8-seed Kings in five games. The other top seed, the Rangers, needed a narrow road win on Monday against the underdog Senators just to force a Game 7. And the reigning Cup champs and Eastern Conference 2-seed Bruins are facing a Game 7 of their own against a Capitals team that couldn’t even clinch a playoff spot until the season’s final week.

The consensus Cup favorite Penguins got their doors blown off, the always-dependable Red Wings were the first team out, the Coyotes team that everyone picked as their trendy upset didn’t get upset, and something probably happened between New Jersey and Florida but nobody is actually watching that series.

The only favorites to win their first-round matchup easily were the St. Louis Blues, who beat the San Jose Sharks in five games. Which is fine, except that before the season everyone had the Sharks as a Cup contender and the Blues as an also-ran. Even when the expected happens, it’s completely unexpected.

Sure, the top seed earns home ice throughout the playoffs. But this isn’t the NFL, where home-field advantage actually means something. These days, home ice means you get to start the series at home, lose Game 1, and then listen to every expert say, “They spent all season gaining home-ice advantage and then lost it in 60 minutes,” because apparently that’s what every expert is legally obligated to say.

That’s not to say that the regular season doesn’t matter — it does. The regular season is where teams find their identity, young players emerge, role players earn their spots, and coaches hone their strategies. It’s just that it doesn’t really seem to matter how much you actually win during all that. As long as you can sneak into the top eight, you’ve got as good a shot as anyone at going on a long run.

And how do you go on a long run? Simple …

It’s all about goaltending.

If there’s one thing we know about every playoff series ever, it’s this: The team whose goaltender plays best wins the series. Your starting goalie has to be excellent, or at least very good, or (if you’re the Flyers) able to make one or two saves more than Marc-Andre Fleury, which is to say one or two saves.

All of which actually sounds just about right. It’s almost common sense. The world is as it should be. Except …

The reigning Vezina winner as the league’s best goaltender is Tim Thomas of the Bruins, who almost single-handedly beat the Canucks in the finals last year while outdueling Vezina finalist Roberto Luongo. But this year, Thomas is being equaled by Braden Holtby, an unheralded Capitals rookie who barely played all season, and Luongo lost his starting job after two games in which he wasn’t even that bad.

Meanwhile, this year’s likely Vezina winner is the Rangers’ Henrik Lundqvist, but he’s been outplayed by Craig Anderson, who’s been so inconsistent over the past few years that last season he was traded to the Senators for Brian Elliott, who at the time was widely recognized as one of the worst goalies in the league. That’s the same Elliott who is now widely recognized as one of the very best goalies in the league, by the way, because like I’ve been trying to tell you none of this makes any sense.

The bottom line: The best goalie always wins, but we have no idea who the best goalie will be until the series is over and we know who won. Flip a coin and you’re probably one step ahead of the rest of us.

Wait, what about my team’s star center/winger/defenseman?

The point is, your multimillion-dollar superstar franchise player sucks. Sorry. You should have spent the money on a goaltender. And no, we have no idea which one.

So what does it all mean?

If you’re the NHL, it means the salary cap worked. After a few post-CBA years to settle in, we’re now officially in the era of parity. Anyone can beat anyone. This is what the league told us they wanted, and now they’ve got it.

Is that a good thing? Hard to say. If you own a small-market team that was struggling to get by under the old system, it’s great news. If you’re one of the big-market teams and you’re watching your competition knock you out of the playoffs with players your own fans paid for via revenue sharing, you’re probably less thrilled. And if you’re a TV executive who just realized that we seem to be heading toward a Phoenix-Florida finals matchup, you’re probably waiting in the parking lot outside Gary Bettman’s office with a lead pipe.

And if you’re a fan? Then it means you never know. If you’ve dreamed of seeing your team build a dynasty, you’re going to hate the new reality. But if all you want is a puncher’s chance, and you like to be surprised, then you’re probably going to love it.

Anything can happen. So flip some coins, ignore the experts, and enjoy the ride. Because none of this makes sense.