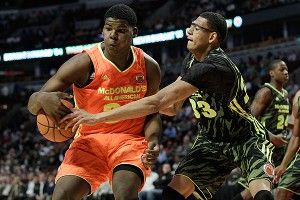 In the past, I have tried diligently to avoid the recruiting aspect of college basketball. I was fine with hearing the the odd bit of news — Harrison Barnes Skyping his way onto North Carolina, for instance — but I didn’t want to become one of the obsessives who tracked the changing emotional tides of a bunch of teenagers as they basked in the momentary suspense and adulation they drew like blood from rival fan bases.

And let’s face facts — a number of these young men, perhaps even a majority, are equal parts stupid and egotistical. I don’t even mean that as a slight; I was surely egotistical and stupid in high school too, the difference being that I didn’t have anything to be egotistical about — except for that time senior year when I single-handedly annihilated our rivals in Quiz Bowl. But now, as an educated young American who reads important papers like the New York Times (before all that subscription talk — anything interesting happen in Libya since 2009?), I knew I would feel pathetic dipping anything more than a toe into the eddies of the recruiting world.

But this year, I got into it despite myself. What I learned is that it is a bit like politics in the sense that there’s a good amount of personality-based intrigue going on, and the decisions are far less objective than those made on the court. That was fun. But in the end, I was right; it will absolutely make you feel pathetic.

For that, I have Tony Parker to thank. Parker is the 6-foot-9 high school center out of Lithonia, Georgia. He’s kind of a big deal due to the fact that Jason Jordan wrote a great, widely disseminated story of his decision-making process a few weeks ago. But he’s also not that big of a deal, at least yet. He’s only the 26th-best recruit in his class, and we all know that even the best of the best aren’t guaranteed any success.

On Monday, Ole’ T.P. committed to UCLA, giving the Bruins the top recruiting class in the country. But it was how he did it that really dinged my self-esteem. Over the course of an interminable, ego-soaked, 45-minute ceremony, Parker was feted ad nauseam before we finally, finally got a decision.

Look, guys. When I took this job, I promised myself I would never use the term “wank fest.” It’s not professional, and it’s not the direction I wanted my career to take. I want to be taken seriously! And you can’t be taken seriously as a dignified journalist when you use terms like “wank fest” at the drop of a hat. So I’m not going to call Tony Parker’s announcement ceremony the wankiest wank fest in the history of self-involved, self-important teenagers who haven’t proved a blessed thing besides their overwhelming egomania.

I’m not going to do that. Instead, here’s the 45-minute video with a bit of commentary, and you can judge the indulgent wank fest for what it is. (Oops.)

0:00 We start out in what appears to be a high school auditorium, with Parker alone at a table setting out a series of hats — UCLA, Duke, Georgia, Ohio State. (In case you’re wondering, this piece has nothing to do with the fact that he didn’t choose Duke; that was a foregone conclusion, and after this atrocity I’m glad he’s far away.) There are helium balloons on either side to frame the spectacle. Already, a syllogism presents itself. If I care, I am pathetic. I care, and therefore I’m going to consume Wendy’s spicy chicken sandwiches until I die.

1:00 He slaps fives with someone, and then sits back as photographers capture his image for posterity. There’s a framed photo next to him holding two basketballs out to the side. And now I’m wondering: Whom do I hate more, in this life, than Tony Parker? Hard to say, really.

4:25 Four others settle in beside Parker at the table, and a man in a white shirt named “Coach White” (that’s why he wears the shirt, probably) begins to speak. He calls Tony Parker “one of the most decorated players in the history of the state of Georgia.” “When I met him,” White continues, “he said, ‘I’m going to win championships wherever I go.'” Fun guy. He was 14 then, real down to earth. Kind of guy you could have a beer and a few laughs with on a Thursday and be home before midnight.

6:50 It’s time for Principal Priester! He begins: “Thank you, Coach White, uh, for those comments and I would just like to thank Coach for comments that, uh, Coach White made.” They hired him for his eloquence.

(Wait, why am I making fun of the principal? Why? Because in this world of recruiting, folks, nobody is innocent.)

8:15 An awkward moment while the people around Tony talk intensely to him. He looks sullen. Great guy. Fun kid. Great attitude, super witty, really humble, the kind of kid you could see a ball game with on a Monday and still be smiling on a Saturday.

8:30 Whatever happens, I’ll never feel as bad as the photographer obsessively snapping shots of Parker like he’s President Obama and he just announced that people with blond hair will have to wear a plastic parrot on their shoulders whenever they go out in public.

8:45 A pastor comes up to speak. He’s wearing some kind of blue jumpsuit and stands by the balloons. He’s the best speaker of the day, which means he’s also the shortest.

11:00 Virgil and Hazel, Tony’s parents, get up to speak. Glad we could hear from them, because they were the forces behind the man who won four NCAA championships and 14 NBA titles and also cured cancer. I’m just building the Tony Legend, gang. In all seriousness, though, he’s a great kid. Really care-free, hard-working, ambitious, serious, goofy kid. The kind of kid you could lend $3,000 to on a Wednesday and he’d have it back to you the day before.

24:25 Some guy holding a pink sheet of paper. And I’m not shitting you when I tell you he has a poem dedicated to Parker. The first two lines go like this: “Only as high as you reach you can grow / Only as far as you seek you can go.” I would transcribe the last two lines, but there’s a massive earthquake here caused by William Butler Yeats rolling over in his grave.

25:55 A woman whose name I don’t catch has only one request of Parker: “When you leave that university, leave it with a degree.” Everyone shares a good laugh.

35:00 The announcement! Parker speaks for about a minute — he has a boring deep voice and all the charisma of a ripped cardboard box you would find in a poor section of the Soviet Union in 1978 — and then as he’s making his announcement, he actually pretends to pick up several different hats to tease the audience. God, I hate him. First he lifts the Ohio State hat, then the Georgia hat, and then says, “You know what, forget it,” rips open his shirt, and there it is: UCLA. The crowd goes nuts.

When he opens his jacket, he seems fat (is what I’m telling myself).

37:18 A really strange man with black sideburns and a coat of flames descends from the rafters, shocking everyone into silence before pointing a long, bony finger at Parker. “Son,” he says in a craggy whisper, “the Karma Gods have sent me. One day the wheel will circle back upon thee.” Then he vanishes in a cloud of smoke.

Who was that dude?

38:30 Parker holds all the television mics and answers questions from the media. It takes us to the end of the 45 minutes. “It was a really tough decision,” he says. “Wankety wankety blahbitty me-me.”

But really, he’s not a bad guy. He’s a go-getter. An animal in the paint, angry as a ferret, but as honest as Abraham Lincoln. Straight as an arrow, that kid, but not afraid to lie when the chips are down. All class. Good luck, Tony.