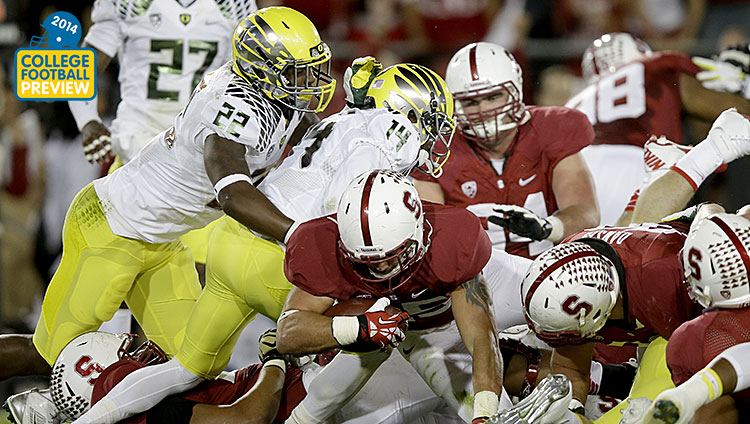 You really can’t ask for much more from a football game than when Oregon and Stanford collide. If these two teams could get out of each other’s way, one of them could have won a title for the Pac-12 in the now-defunct BCS era (remember that USC vacated that title from 2004). The rivalry is modern vs. traditional. Fast vs. slow. Offense vs. defense. It’s like the Boltons vs. the Greyjoys, except it’s nothing like that other than being football in the “north.” And for the last three years, the Ducks-Cardinal game has derailed a school’s national title hopes. It’s awesome.

The two schools really couldn’t be more different. Oregon is well known by now as running a hyper-modern offense that puts up points in bunches. No one has scored more in the last three seasons combined than the Ducks. Stanford, meanwhile, has been one of the country’s top defensive teams in that span, and plays a style of old-school football that focuses on defense and the run game. The differences go deeper. Oregon has flash (just look at the uniforms) while Stanford has tradition. Stanford is known for its academic prowess, while Oregon falls in the middle of the conference.

This year the two meet in Eugene on November 1, just as the college football season begins to wind down and national title hopes are made … or broken.

In 2013 and 2012, Oregon stumbled late in the season and watched its unbeaten record and top-two ranking get mangled by Stanford’s lines. In 2011 it was the opposite — Stanford saw the no. 3 ranking slip through its fingers as LaMichael James slipped through tackles.

The last two years — and in 2013, especially — Stanford has pounded Oregon on the ground. Last November, Stanford rushed the ball 66 times against Oregon, compared to just 13 pass attempts. Just look at the possession numbers: The Cardinal held the ball for more than 42 minutes to Oregon’s 17. To say the Ducks were pushed around is an understatement — they had the football shoved down their throats.

It’s a cliché, but it really feels like Oregon’s hurry-up offense can’t find its rhythm when it spends so much time off the field. Just watch Marcus Mariota in the Ducks’ disastrous first half against the Cardinal from last year’s game. He continually under- or overthrows what should be easy passes for the Heisman hopeful. Stanford’s pass rush deserves a lot of credit (and Mariota was wearing a brace on his left knee), but there’s more to it than that — Oregon’s offense just doesn’t look like the same kind of blazing-fast, score-on-any-and-every-possession unit when it plays the Cardinal.

There’s a case to be made that Oregon could have won last year’s game, especially after two very questionable calls in that first half led to a 14-point swing in Stanford’s favor. But then you go back and watch Stanford on offense, watch the Cardinal bruise their way to first down after first down, and, well, there’s a reason time ran out on the Ducks.

But this year could be different. The last two seasons Stanford has run over Oregon with David Yankey, Khalil Wilkes, Cameron Fleming, and Kevin Danser — four offensive linemen who weighed more than 300 pounds on average and spent the last two years tearing open running lanes for Stanford’s tailbacks. Those four are gone, and so is All-Pac-12 second-team running back Tyler Gaffney. The Cardinal may end up starting Barry J. Sanders at running back, who would bring a different style from the more bruising backs they are used to. And yes, he’s that Barry Sanders.

Oregon, meanwhile, is bringing in a mostly new crop of players to its front seven, though it will have more experience there than Stanford will along its offensive line. Oregon is losing defensive tackle Taylor Hart, but is retaining what is probably its most talented pass-rusher in Tony Washington, who had 7.5 sacks and 12 tackles for loss in 2013. Washington, Derrick Malone, and Rodney Hardrick return to a linebacking core that is mostly intact by college standards.

Alex Balducci will likely be the Ducks’ new starting nose tackle, and he is paired on the defensive line next to Arik Armstead and DeForest Buckner, who both saw time as starters in 2013. None of those three juniors are stars, but both Armstead and Buckner have the physical tools to break out this year. Armstead is 6-foot-8 and nearly 300 pounds but can move quickly — he used to play basketball before leaving the Oregon team in January to focus on football. Buckner is also a behemoth, and he started eight games as a sophomore.

Stanford brags that its 2012 offensive line class — which should finally start together this year — could be the best “in college football history.” That includes Andrus Peat, who started every game in 2013 and was named to the All-Pac-12 second team as a sophomore. But there’s enough turnover on the line that there is no saying whether the Cardinal will be able to have the kind of success it had the past two seasons. Combined with losing Gaffney, the early edge has to go to Oregon in the ground war.

If Oregon can hold that edge, it can set things up for its offense on the other side. Stanford dominated Oregon last year by holding on to the football for almost three-quarters of the game, but there’s reason to believe this year that the Ducks will be able to stop Stanford’s attack and get the ball back. And if Oregon can rush the ball better at the same time (the Ducks averaged just 2.6 yards per carry against Stanford last year) it can flip those possession numbers and come out of Autzen Stadium with a win.

Unless Washington or some other dark horse can rise up this season — which is a possibility now more than ever — the Pac-12 North will run through Eugene and Palo Alto. When the two collide, it should go a long way toward shaping the national title picture. If they don’t beat each other up too much, one of them should make the college football playoff and even the national championship game. But given recent history, it’s likely one will just eliminate the other from the race. Either way — triumph or tragedy — it’s compelling television.