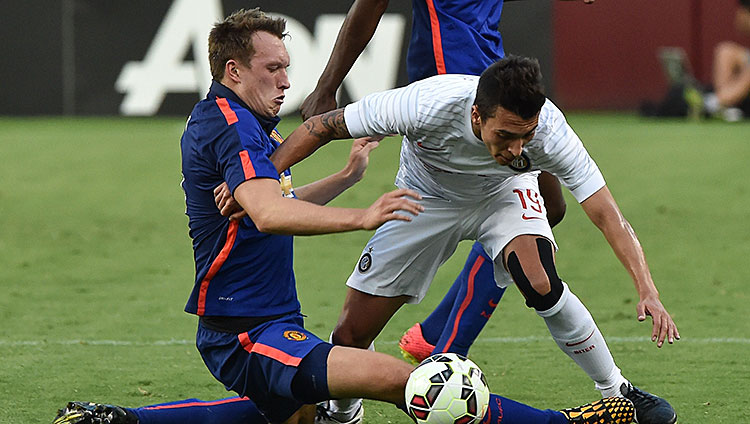 As the summer of Louis van Gaal turns into the season of Louis van Gaal, the Dutch manager seems set to put a tactical stamp on the Premier League, bringing the three–center back system he used at the World Cup to Manchester United. And it’s a harbinger of things to come; outside of England, the back three (or five) has been making a comeback. Here’s what’s behind van Gaal’s — and a handful of other coaches’ — thinking.

The most obvious reason to play a back three is to counteract an opposition playing two strikers. Each defender can body up to a striker, with a third left to clean up behind. No fancy schemes, no interchanging positions, or complex patterns of movement. Just three versus two. But that becomes a problem against teams that play only one striker. When that happens, you risk having three defenders with only one pure attacker to deal with, and your opponent gets a numerical advantage elsewhere on the field.

In the Premier League, and in European soccer generally, teams that play two traditional strikers are relatively rare. Manchester City did it often last year, pairing two of Sergio Agüero, Edin Dzeko, and Álvaro Negredo, and Liverpool kind of did it with the dynamic duo of Luis Suárez and Daniel Sturridge, though they often looked like a weird hybrid, three-attacker system, with Raheem Sterling supporting the other two. While there are no absolutes, in general, single-striker systems are more prevalent.

To thrive against that system, a three-man central defense needs some creative wrinkles to avoid being exploited. This is where I tell you that all back threes are not created equal, nor are they particularly similar to one another. You wouldn’t compare the way Stoke City play with the way Borussia Dortmund do, just because they both happen to play with four defenders. The same is true of systems with three defenders. They can vary, based on what manager is using them. Van Gaal is instituting a back three that works one way. In Germany, Pep Guardiola has played around with a back three that looks a lot different.

Van Gaal’s system is alternately called a 5-3-2 and a 3-4-3, largely because the positioning of the wingbacks/wingers can vary greatly. It employs teamwide man-marking, with each player responsible for a specific opponent on the field. Those of you who are astute at math might notice a slight problem with that — namely, that while van Gaal’s squad has two wide men, most other teams will have four (two wingers and two full-backs). When opposing full-backs attack van Gaal’s teams, it becomes the responsibility of one of his three center backs to help the winger.

Wide players in van Gaal’s system have to occupy a variety of roles, based on their opponent. Because they are playing one-on-one against an opposing winger, the amount of time they spend attacking depends entirely on how aggressive their defensive assignment is in attack. That’s why, during the preseason, both Luke Shaw, United’s shiny new 19-year-old left back, and Ashley Young, United’s stained 29-year-old failure of a winger, saw time at the left wingback position. Against a team like Liverpool, with a dangerous attacker like Raheem Sterling, that position involves a lot of defending. Against lesser competition, though, van Gaal’s wing players have the freedom to get forward and dive-bomb toward the opponent’s goal.

Man-marking all over the field is an extremely aggressive, risky endeavor. There will invariably be jailbreaks from time to time during the season, when United’s midfield press gets beaten. Having an extra defender allows one center back to step up toward an onrushing attack, while not leaving an opposing forward, one-on-one, behind him (otherwise known as “doing a Kompany”).

The system works because it’s a cohesive whole. It’s built to accommodate an aggressive pressing defense and a fast, direct attack. In an era when there’s a lot of emphasis placed on wing play and overlapping runs from attacking full-backs, van Gaal’s system focuses on keeping the action in the middle of the field. It’ll be interesting to see how the system fares when United play teams dedicated to defending deeply and not getting drawn into a fast-paced up-and-down game. The Dutch struggled to create chances against both Argentina and Costa Rica, two of the more defense-minded teams to go deep in the World Cup. 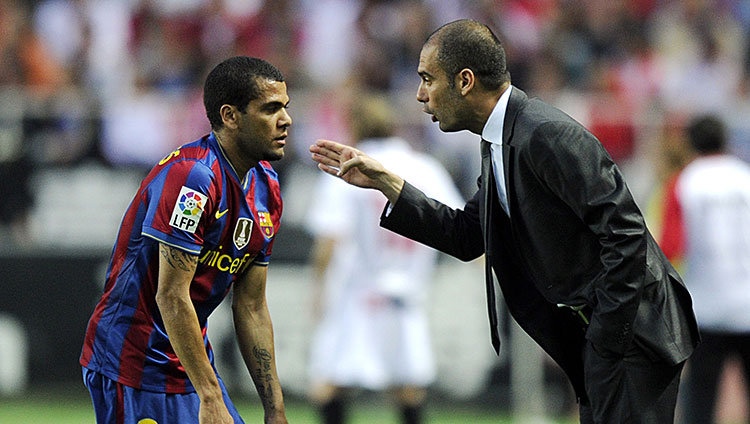 Pep Guardiola’s back three operated completely differently from LvG’s. During his last season at Barcelona, Guardiola often experimented with a back three, often featuring full-back Dani Alves. And, in one of the odder football comparisons of all time, that’s similar to how Roberto Martínez operated at Wigan, before he moved to Everton. He used a handful of players you’d traditionally think of as full-backs or wingers as part of a three-man defensive line. Guys like Emmerson Boyce, Maynor Figueroa, and even Jean Beausejour started, nominally, as center backs. On the surface, this seemed insane.

The reasoning behind it, however, was and is surprisingly sound. Possession football, especially in the last several years, is predicated in part on having full-backs join the attack. As the full-backs push up the field, the two center backs split extremely wide and a midfielder drops between them. (Think Steven Gerrard, right before that moment.) In effect, many possession teams were morphing into a three-back squad anyway when they had the ball, but that three was made up of a midfielder flanked by two center backs, a formation known by its more traditional name, “three guys being forced to play out of position.” A back three comprised of at least one (and sometimes two) full-backs solves that problem. The wide defensive areas are patrolled by speedier full-backs, and a traditional center back sits in the middle.

It’s not hard to imagine Guardiola implementing a similar system with left back David Alaba as part of a back three at Bayern Munich. If you run that system, you better have the ball all the damn time, because you simply won’t have the physicality to deal with defending deep in your own territory otherwise. That’s part of why Wigan struggled so much defensively under Martínez. They were one of the only bottom-half teams to consistently control possession, but when they lost the ball, they conceded quickly and often. It made for entertaining soccer and won them an unexpected FA Cup, but ultimately the magic ran out.

Martínez has yet to break out the formula with Everton, but the team has a host of attacking wing talent now, and a couple of good young hybrid defenders like John Stones and Muhamed Besic (who played in the midfield for his country, Bosnia and Herzegovina, but featured at both center back and right back for his club in Hungary). Everton eventually playing a back three wouldn’t be at all surprising.

Lineup formations and strategic approaches are a never-ending game of cat and mouse, and there are a number of formations based on having three central defenders that could succeed. As with most tactical trends, though, it’s not the formation, it’s how it’s used. If van Gaal’s system is successful, expect more teams to follow suit over the coming seasons.

Some will implement a new system well, and others will grasp at straws, the same as they currently do. Eventually, systems based on a back three or five could become the new norm. Or this could end up a blip, a trend made up of a Dutch madman and a Catalan tinkerer (or two). There’s only one way to find out. Thankfully, the season’s less than two weeks away.

Making a Point About the PAT