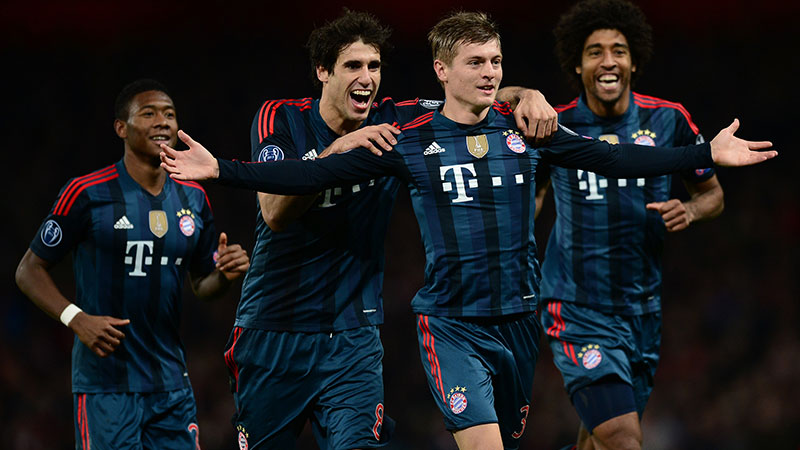 A look back at this week’s Champions League action.

How Good Was Toni Kroos?

Spike Friedman: After watching him tear Arsenal’s midfield apart like it was Manchester United’s midfield, can we all raise a glass to the velvet majesty that is Bayern Munich midfielder Toni Kroos? Kroos completed 11 fewer passes than Arsenal’s entire team (147-158). He did so at a 97 percent completion rate. He scored a goal on an unstoppable curling strike, hit the woodwork on another long-range effort, and created the chance that led to Wojciech Szczęsny’s red card, effectively sinking Arsenal’s Champions League hopes. All in all, an exceptional Wednesday at the office for Kroos.

This is what Toni Kroos does. He’s not fast or flashy, but he’s unfailingly accurate. He’s also, conceptually, a bit of an odd fit on a Bayern team filled with players who do something better than anyone else in the world. Whether that’s Ribery’s pace and footwork, Robben’s left foot, Muller’s ability to create space on diagonal runs, Lahm’s intelligence, Mandzukic’s holdup play, Goetze’s vision, Alaba’s speed and crossing, or Javi Martinez’s compelling impression of a bulldozer, Bayern’s best all bring with them something irreplaceable.

This somehow means Kroos may be on the outs at Bayern. Despite his being 24 and at the top of his game, the club has decided to play hardball on his next contract. This is lunacy; under Guardiola, Kroos’s presence is more crucial for Bayern’s success than ever before.

The biggest change that Guardiola has made this season, after taking over a treble-winning Bayern side from Jupp Heynckes, has been to rely on a single holding midfielder, turning Bayern’s 4-2-3-1 into a 4-1-4-1. With Martinez and Bastian Schweinsteiger struggling with their fitness, Lahm has most frequently been deployed in the heart of the Bayern midfield. He has been a revelation in the role. This picture demonstrates the efficacy of that formation:

You can actually isolate the primary tactical change Guardiola has made in the way he has inverted the central midfield trio in an attack-minded group. Last year’s first choice setup had Kroos alone, in front of Schweinsteiger and Martinez. Now Kroos, along with either Goetze or Thiago, plays in front of Lahm operating as a single pivot.

This formation requires tactical discipline from the two attacking midfielders; they have to operate in lockstep, maintaining possession. Any failure to do so can lead to the defense being overrun. Arsenal exploited mistakes from Bayern early in this match, and easily could have gone up two goals were it not for the excellence of Bayern goalkeeper Manuel Neuer.

Bayern’s depth has led the club to undervalue Kroos. Schweinsteiger is Bayern, Thiago and Goetze were Guardiola’s big acquisitions, and next year Muller will presumably have to slide back into the midfield on a more permanent basis to make room for Robert Lewandowski. Franck Ribery and Phillip Lahm are arguably two of the five best players in the world. Where does Kroos fit in all this? Maybe it would make things easier if he were playing in England.

Except, no. Kroos’s tactical discipline as an attacking midfielder is unparalleled. His movement, while not the fastest, is intelligent enough that, when deployed in front of Lahm, he can comfortably take up any of the points on the pinwheel around him, or drop back and play the fulcrum allowing Lahm to press forward. He can pick passes long or short, and knows when to fire in a shot or create a chance. This was all there in Bayern’s win over Arsenal. Going back to the stats: 147 completed passes at a 97 percent rate, three chances created, a goal, a near-miss, and complete control of a match that Bayern was fixing early to let slip through their fingers. Toni Kroos is just too good to let go.

Mike L. Goodman: Two marquee games. Two defining incidents. Both Manchester City and Arsenal did well to compete after conceding the dreaded double of a red card and a penalty, but in the end, being down a man against top opposition was just too much for either side. So, what exactly did the English sides do so horribly wrong?

The mistake here is that nobody tracked Arjen Robben’s run. It’s probably the responsibility of left back Nacho Monreal (on for an injured Kieran Gibbs) to go with Robben as he darts through the defensive line, but Monreal was caught completely unaware by the movement. Still, though, it takes an incredibly precise pass to drop in between the defensive line and the onrushing Wojciech Szczesny.

As for Szczesny, it sure looks like his charge would have ended up meeting the ball right as it dropped to Robben. Whether it’s training, or instinct, or a conscious decision, Szczesny’s trajectory might’ve made sense in the vast majority of situations, but this is Arjen Robben we’re talking about — a man who has (I’m assuming) inspired works of poetry with his left boot. So of course he takes the preposterously accurate little lob out of the air with the outside of his left foot, for he is Arjen Robben. And that was all she wrote for Szczesny.

The City penalty is a little more complicated. It’s easy to look at this:

And just say, “Messi fast, Demichelis slow, lolz.” But it’s more complicated than that. The move starts when Jesus Navas gives the ball away on the right wing and Barcelona spring into attack. 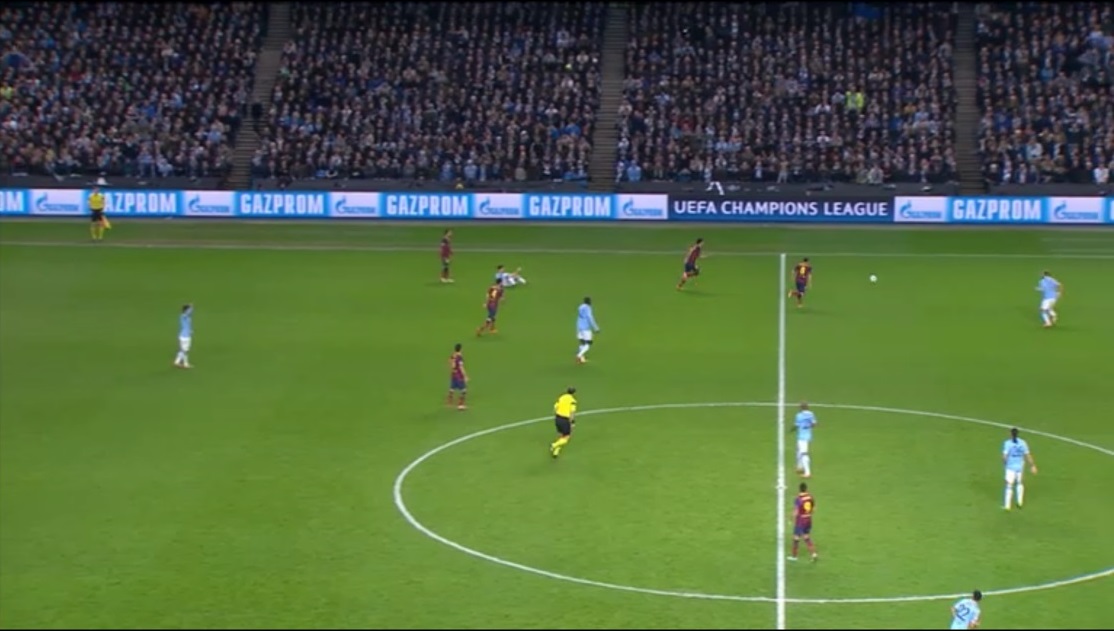 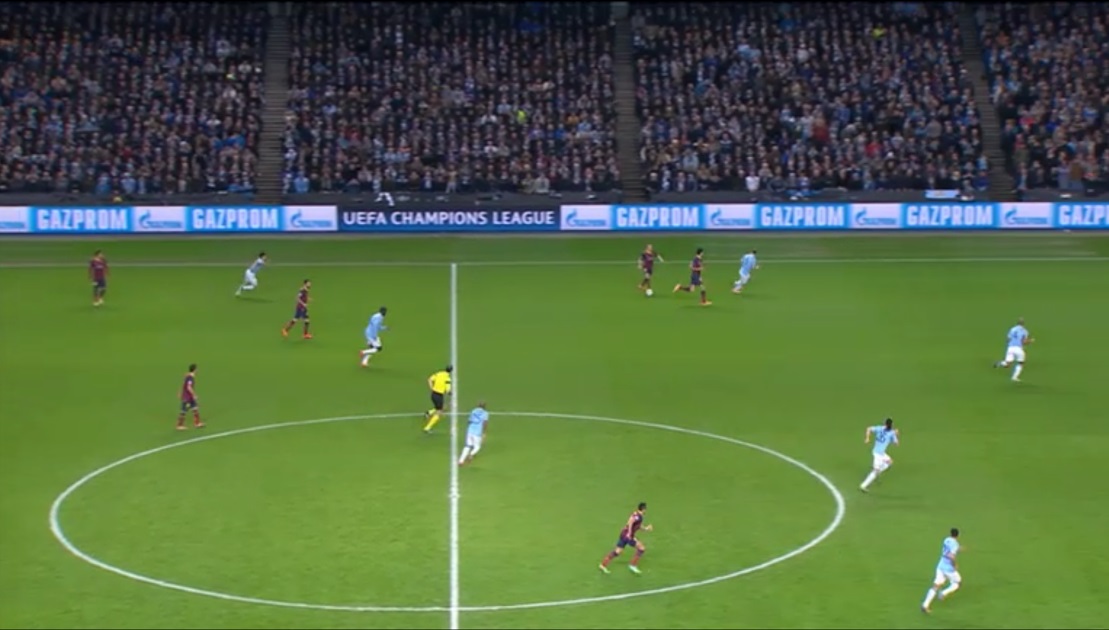 As the play progresses, Demichelis is sprinting to try to get back in position. Meanwhile, Barcelona have a two-against-one on City’s right, where Pablo Zabaleta is isolated. Kompany, now in the picture, has to be alert both to the possibility of a ball down the sideline and to Messi lurking offside (not in the picture) behind him. 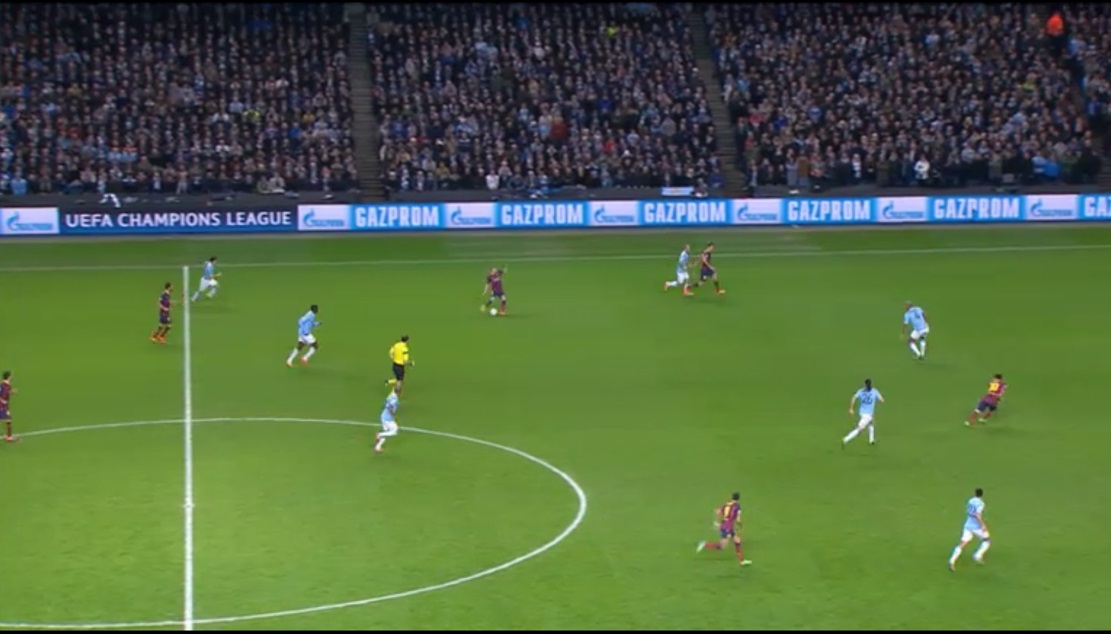 Messi meanwhile gets to play what is, in effect, a reverse offside trap. With Demichelis out of position, and Kompany rightly concerned with the ball, Messi has the freedom to line himself up with Kompany, and jump back onside just before the ball is played to him. That leaves him more or less unmarked, with just a lonesome ponytail flapping in the breeze behind him.

The fact that Demichelis has no recovery speed is part of the problem here; he’s the one who put himself in a position where he needs to recover. That’s the thing about speed in a defender: You mostly need it to cover up for a mistake.

It should be noted he did that with his weaker foot.

Goodman: The thing that makes Atletico Madrid such a fascinating piece of the Champions League this year is how comfortable they are without the ball. That makes them the perfect foil for some of this year’s favorites. That said, it makes for some very dull football against the more mediocre competitors, like AC Milan. It was hard to escape the idea that Atletico entered the match feeling like they had 180 minutes to score, and there was no particular rush to do it in the first 90. They did though, eventually, off a set piece. And if Milan ever really had a chance, it’s close to gone now.

Teddy Bridgewater, Johnny Manziel, Blake Bortles or Derek Carr could be available when the Bucs pick in the first round. Even if the Bucs draft a quarterback, Smith hinted that the team might want to add a veteran to go with the rookie and Mike Glennon.

Andrelton Simmons just signed a seven-year deal with the Braves. Read about why his talent is beyond belief.