The Hunt for the NL Central 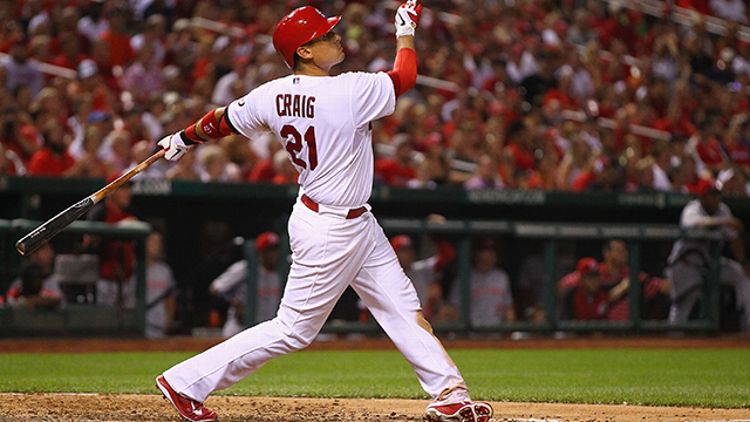 Three games into the biggest stretch of their season, the Cardinals have taken two out of three against the Reds, seizing first place in the NL Central.

Still, the race is far from over. The Cards have 29 games left to hold on to their lead. Meanwhile, the Pirates and Reds lead in the race for the two wild-card spots, and remain in the hunt to catch St. Louis — Pittsburgh is just a half-game behind, with Cincinnati 3½ games out. Baseball’s most compelling race could swing on any number of factors. Here are some we’re watching closely.

The Pirates’ defense: With killer-glove, no-bat shortstop Clint Barmes losing his job to Jordy Mercer, the Pirates now start below-average defensive infielders, whether by reputation or by advanced metrics. It hasn’t made a lick of difference.

The Buccos are converting more balls in play into outs than nearly any other team. They owe a good deal of that success to some of the most aggressive defensive shifting in the game. Pittsburgh has a cadre of analytical minds working in the front office, from GM Neal Huntington to former Baseball Prospectus writer Dan Fox. When a team makes tactical moves that pay off, it’s almost always the manager who gets the credit (just as he gets the blame when moves don’t work). In this case, Pirates skipper Clint Hurdle has made it clear in interviews that data crunchers upstairs have been largely responsible for Pittsburgh becoming one of the most progressive teams when it comes to defensive strategies. Still, you have to tip your cap to Hurdle. Teams that do the best job of communicating and exchanging ideas, from the top decision-makers down to on-field personnel, often reap an advantage that can be as important as a big jump in payroll. In 2013, the Pirates certainly qualify as one of those teams.

The Reds’ starting pitching: Only the Dodgers’ starters have posted a lower cumulative ERA than the Reds. But we could see a bit of a pullback in that performance over the next few weeks. Rookie lefty Tony Cingrani, who had given up two runs or fewer in eight of his past nine starts, with a 2.15 ERA and more than a strikeout per inning during that span, hit the disabled list this week. The Reds are already without Johnny Cueto, who has been out for two months with a back injury. That forces Cincinnati to go with journeyman Greg Reynolds — the guy drafted right before Evan Longoria — and give him the ball every fifth day. You can still argue for the Reds’ rotation over Pittsburgh’s or St. Louis’s, given the front four remains solid with Mat Latos, Homer Bailey, Bronson Arroyo, and Mike Leake. But the Reds are now likely facing three or more starts from potential replacement-level starters while they wait for Cingrani, Cueto, or both to get healthy. Not a huge deal over the course of a full season, but definitely an issue when you’re chasing two other teams with just a month left to play.

Jeff Locke: Every stathead in the known universe has been predicting Locke’s downfall for the past three months. With the left-hander on his way to Double-A Altoona, we’re finally here. In his first 20 starts of the season, Locke struck out just 88 batters and walked 57 over 121⅔ innings. But thanks to a low home run rate, a .236 batting average on balls in play, and especially the best numbers in baseball for any pitcher with runners in scoring position, he put up a Kershawian 2.15 ERA during that stretch. The regression monster has whacked him in the head since then, with Locke’s BABIP soaring to .453 over his past six starts, fueling an 8.10 ERA.

In a sense, this isn’t that bad for the Pirates. Francisco Liriano has emerged as an elite and shockingly consistent ace, and A.J. Burnett has been excellent when healthy, too; Locke never needed to carry this staff for Pittsburgh to have a shot. But with just two off days left in their schedule, the Pirates can’t hide the fifth starter’s spot. So either Locke will have to rediscover his stuff in the short time he’s down on the farm, or someone will need to make it back from the DL to fill in (don’t count on it), or the Bucs will be rolling the dice every fifth day, hoping for something resembling a viable option.

Allen Craig, the Greatest Clutch Hitter of All Time (or pretty close, anyway): When we last left Craig, he was hitting an impossible .466/.492/.650 with runners in scoring position. Four weeks later, he’s hitting .452/.500/.643 in those spots. We know this isn’t going to last forever. But Craig’s been doing this since the start of his career, hitting .392 with RISP. Whether Craig is truly one of the very rare players who’ll perform far better in clutch spots than otherwise or just a mirage, it’s no sure thing that he’ll suddenly stop hitting in high-leverage situations. But the Cardinals as a team are less likely to keep it going, and the Cards’ league-best .327/.403/.461 line with RISP has been a major (and tenuous) reason for their success.

The Dilson Herrera Trade: There’s a pretty decent chance that a few years down the road, that’s what we’re going to call the trade that sent Marlon Byrd and John Buck to the Pirates. Just 19 years old, Herrera is only in the low Class A Sally League. But he’s already shown strong potential, with 41 extra-base hits in 109 games and, as ESPN’s Keith Law wrote, potential 20–home run power in the big leagues, rare for a second baseman.

Trading Herrera (and a player to be named later who’s now been named Vic Black) for Byrd and Buck is an attempt to upgrade a right-field position that’s been awful for the Pirates this year. At the time of the trade, Buccos right fielders were hitting .245/.307/.368, with below-average defensive numbers to boot. Byrd on the other hand has been a beast, hitting .285/.330/.518 with the Mets before making his Pirates debut on Wednesday — when he promptly hit a three-run homer. Again, the question is whether Byrd can keep up his out-of-character performance this year, or revert back to the replacement-level player who hit just .260/.305/.358 in 2011 and 2012, and had a batting average on ground balls of .226 in 2009-12 while hitting a next-level .310 in 2013. Pittsburgh has made incremental moves over the past couple years, acquiring players like Derrek Lee, Ryan Ludwick, and Wandy Rodriguez in midseason trades without giving up any prospects of note. You have to love a team going for its first division title, playoff berth, or even better-than-.500 season in more than two decades and spending whatever it takes to improve its odds. Let’s just hope the Pirates didn’t give up a potentially very good young player to get a right fielder who’s barely better than what they have.

The Schedule: Congratulations, Cardinals. You’ve just won two-of-three against a likely playoff team that is one of your toughest rivals. Your reward is to do that again for the next 10 games — three against the Pirates, four more against the Reds, then three more against the Pirates. Those games do give the Reds and especially the Pirates a golden opportunity to make up ground in the standings. But if the Cards can get through this stretch by, say, splitting, they’ll be in great shape to win the NL Central. St. Louis’s final 19 games of the season come against a murderer’s row of cream puffs: the Brewers, Mariners, Rockies, Brewers again, and the Cubs, with three games against the .500ish Nationals the toughest of the bunch.

The good news for the Reds and Pirates is that they’ve got plenty of easy pickings left on their own schedules. Cincinnati gets three each against the Rockies, Cubs, Mets, Brewers, and Astros. Meanwhile, the Pirates have 15 games left against the Brewers, Padres, and Cubs. Soft opponents don’t guarantee anything, of course. But given the way the schedule lines up and the size of the wild-card leads built by the Reds and Pirates, the odds overwhelmingly favor an NL Central battle royal come October.

About Last Night: Johnny Football Sort of Takes a Seat