The Designated Player at the MLS SuperDraft 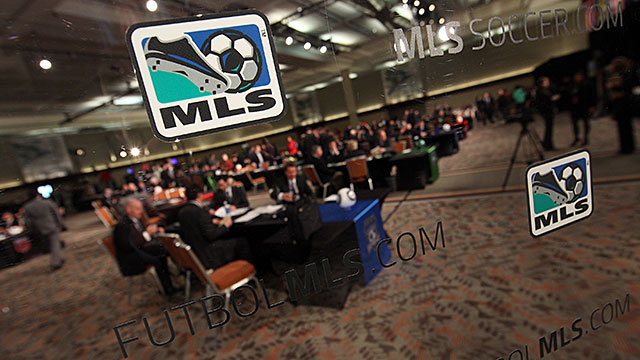 Last week, the MLS SuperDraft took place in Philadelphia. I’d thought of joining in with one of those hand-wringing “state of the draft” pieces that have grown in frequency each of the last few years. But at this point it’s just a given, really — because of the growth of the academies, the rise of the homegrown player (DeAndre Yedlin and Gyasi Zardes bypassed the draft entirely last year in signing for the clubs that had developed them), the incremental narrowing of the gap between the U.S. soccer ecosystem and the rest of the world (I’m talking about how the system runs rather than relative talent bases), and the growing sense that a lot of players developed for college soccer are actually being developed counter to how they would have been with a club — that all these phenomena prop up the truism that “the draft is not what it was.”

Certainly, when I asked Jason Kreis about the depth of talent coming into an expansion-happy MLS at his NYCFC presser a few days earlier, the future New York head coach called it a “serious concern,” before indicating that the new club would not only look beyond the existing MLS talent pool, but that it had a “responsibility” to do so. With Manchester City sharing the resources of the 14 club scouts deployed in South America, chances are that Kreis’s new head of player recruitment, David Lee, will be watching a few Spanish-language video clips in the coming months.

But with the cap set where it is, for one more year at least, there are usually at least one or two positions on the field at which the SuperDraft still represents the best value for money out there — particularly when a team can pick up Generation Adidas recruits who don’t count against the cap. A team like Toronto FC may have started the week with the splashy pickups of Michael Bradley and Jermain Defoe, but by Thursday afternoon it was trading back into the top 10 to acquire solid-looking young defender Nick Hagglund, in an effort to pad out the squad. As the David Beckham experience tells us, it’s the successful assembly of just such a squad that will determine how brightly star power gets to shine.

And, of course, despite the odds increasingly tilting against such an outcome, there’s always the hope we’ll see a future franchise player coming on the scene, perhaps early in the second round like Graham Zusi (voted best player in MLS by this year’s combine participants ).

As much as anything, the SuperDraft is one of the league’s ritual spectacles. And for all the reasons mentioned above, it’s becoming a more awkward one — production values for the TV and online coverage arguably increase exponentially in inverse proportion to its sporting relevance, giving the proceedings a slightly “empty calorie” feel as the event bloats over three hours.

Yet all the reasons mentioned above are also why it’s fascinating to attend the SuperDraft. I duly drove down to Philadelphia last week and wound my way through the massed ranks of NSCAA attendees swarming the Pennsylvania Convention Center to reach the main ballroom. (On a side note, a Brazilian coach I know who attended this self-styled “world’s biggest soccer party” was wowed by the thousands of coaches in attendance, telling me, “In Brazil, you do something like this, you maybe get a couple of hundred coaches. There’s nothing like it.”)

The ballroom itself was divided up by a mix of crash barriers and heavy drape curtains (from behind which commissioner Don Garber would later emerge in an inadvertent Wizard of Oz flourish). A central area of team conference tables was surrounded horseshoe-style by fan sections, camera podiums, press work areas, and a dais or two for the obligatory photo shoots, including the traditional “family photo” of head coaches that kicks off proceedings.

Watching those coaches being shuffled into position is a minor theatrical masterpiece in its own right — along with the frisson of knowing many of the intersecting histories represented among the rows of suited men adorned in club scarves.

Boxed out in a corner, and almost off the edge, was Wilmer Cabrera, the new head coach at the current masters of managerial fumbling, Chivas USA. Elsewhere in the same row was Cabrera’s former Colorado Rapids boss Oscar Pareja, newly and controversially installed as Dallas’s head coach.

With no Colorado coach installed to take his place yet, Rapids technical director Paul Bravo scuttled into the shot at the last minute, as Houston’s Dom Kinnear and New York’s Mike Petke laughed alongside each other. “Something you haven’t told us yet?” one of them called out to Bravo, who muttered something about Colorado keeping its cards close to its chest as he lined up in lieu of a head coach. Pareja kept staring straight ahead, with a fixed smile, as this exchange took place below him.

There were absent faces too — no Schellas Hyndman, casualty of yet another slumping season in Dallas, and no Martin Rennie, who tinkered his way out of the Vancouver Whitecaps last year. Rennie was replaced by former assistant Carl Robinson, who lined up alongside Peter Vermes, Sigi Schmid and Bruce Arena, in the center row — perhaps hoping for a little of their longevity to rub off.

It’s been a bumpy baptism for Robinson — the drawn-out and undignified Camilo transfer saga (which drew a dismissive comment about the player’s character from Garber on draft day) has left the Whitecaps looking particularly undermanned up front, especially when considered in the light of the acquisitions made by Canadian rivals Toronto. The SuperDraft should have been a more straightforward affair, and indeed the Whitecaps looked to have stolen an early march on their rivals by taking the athletic defender Christian Dean early, then grabbing the Jamaican midfielder Andre Lewis, a player who’d been the breakout of the combine — only to then have to spend a couple of days dealing, not particularly elegantly, with the fallout of Lewis having supposedly already signed for the NASL’s New York Cosmos. But for the brief moment of the head coach photo, all that is in the future. For now, nobody’s had a bad start to the season, and the prevailing mood among the coaches is jovial.

As for the main event, well, you know what a draft looks like. Philadelphia traded up to the first pick to loud applause from its fans in the ballroom, who until then had entertained themselves by chanting “still not a cup” at their New York counterparts brandishing the Supporters’ Shield. As a line of taunting this has promise, but only if the Sons of Ben follow it to absurd extremes and start holding up Magritte tifos (“Ceci n’est pas une tasse”…) at games. Otherwise, it’s pretty meager consolation for a rival’s success.

Philadelphia took Andre Blake with that first pick, the first time a goalkeeper has gone no. 1. Zac MacMath, the improving but still raw goalkeeper for the Union, can hardly have been thrilled at Blake’s arrival.

The Union made other moves, and along with the Whitecaps and the Revs were generally seen to have had the most significant dealings of the day — at least as far as anyone knew. I caught up with Travis Clark of college specialists TopDrawersoccer.com, probably one of the few people in the room beyond the team tables (and even them, to be honest) to have a decent working knowledge of the players up for grabs. I asked him why Patrick Mullins fell from mock draft favorite to the relative indignity of no. 11 (though he can be consoled that the Revs traded up a place to snag him). Clark shrugged, mentioning something about forwards historically being a risky proposition and teams that hadn’t expected Mullins to still be available hadn’t really done their homework on him, before glancing up from the press row at the still unfolding circus in front of us, as if to say, “What do you expect?”

I wasn’t sure what to expect. For sure, we’re in an interesting year. The impending TV rights deal, the bellwether status of a World Cup year, and, perhaps most significantly, the impending collective bargaining agreement negotiations will mean that the state of the league and all its moving parts, including the SuperDraft, will be under more scrutiny than usual over the coming season.

Garber’s mention at the draft of the $75-$100 million annual losses incurred by the league was arguably the first shot across the bow of the players’ union, as it gears up to shape its demands for that new CBA. That process may be be a big part in determining the economic future for the young men stepping off the stage in Philadelphia to be draped in team scarves. That, and how they kick a ball, of course. Away from the DJ intros, the photo ops, the video montages, and the buzz of the convention center, there are games to be played. As the second round progresses and the hall empties, the first picks of the Class of 2014 are already dispersing toward corners of North America, hoping for their shot.