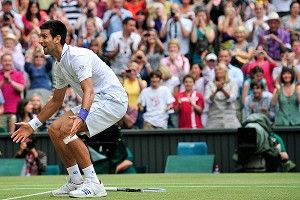 You guys like the little joke in the post title? That’s some subtle work, my friends. That’s like a violinist playing a note only dogs can hear, and everyone’s like, “Why isn’t this violinist playing music?” until suddenly wild dogs are knocking them over left and right. It’s been known to happen. That’s where I’m at.

All right, let’s get serious. You’ll often hear folks chatter about the best time of year for sports. But they’re mostly vague and unscientific, and I say it’s time to get serious. If we really want to find that hidden annual peak, we have to home in on the individual months. For the purposes of the ensuing study, I will consider the following: professional baseball, basketball, hockey, football, soccer, golf, tennis, special events in each, and college football and basketball. I’m not getting into the Olympics, because they’re sort of all over the place depending on the venue.

Here now, for your consideration, are the top 12 sports months of the year. I invite you to peacefully agree with me in the comments.

The final month of the year is also dead last for athletic spectacles. The lone highlight that threatened to vault December into the top 10 were the college football conference championships. Those happen on the first weekend, and are usually a good time. But the rest of the month is filled with mediocre bowl games named after auto repair shops and Internet start-up companies that go bust by halftime.

It’s also a miserable month in college basketball; the thrill of the November marquee matchups is gone, but most conferences don’t start league play until early January. That leaves a whole lot of UNC vs. UNC-Greensboro type games. Finally, it’s a boring stretch for the NHL and NBA, aside from a few good ones on Christmas Day. This is when the doldrums begin.

By far, this is the worst summer month. No tennis championship (though I have to admit, the first week in Flushing Meadows is pretty fantastic), and the least exciting major in golf. It may be “glory’s last shot,” but the PGA Championship is the habitat for golfers, like Davis Love III, who are too boring to win the real majors. There’s a lot of baseball, to be sure, but it’s arguably the worst month of the season; none of the opening flair, no All-Star Game, and still far enough away from the playoffs that it’s hard to get excited about the standings. I guess people in Europe probably get psyched up for soccer, but this is an American list, so you have to expect American bias. In fact, August would have taken the bottom spot if not for a special, unofficial event that is beyond hollow words like “compelling”: the Little League World Series.

How can the Super Bowl month get ranked at no. 10? It’s a fair question, from a fair person, but I see the NFL playoffs as a January creature, with the February Super Bowl date as a kind of anomaly. It’s like that one time when your dad remembered to send you a birthday card from prison; it’s only notable because it’s an exception. (What’s everyone looking at?) The rest of the month is rough; a slam-dunk contest and a few good conference games in college basketball are the only diversions worth noting.

I can’t believe I’m doing this, but hear me out: March Madness is the only redeeming feature of the month. Granted, that’s like saying Neil Armstrong’s only redeeming quality was his ability to be an astronaut who walks on the moon, but we have to take a broad look here. Without the Madness, March would be buried so deep in the cellar that even the spiders wouldn’t go near it. Is March one of my favorite sports months? Yes. But is it a good sports month, considering everything else? Unfortunately, no. March is like the Detroit Lions of the Barry Sanders years. Beyond that legendary element, it’s all a bit pathetic.

October is a little like February and March in the sense that it has a big star — baseball’s playoffs and World Series — and a weak supporting cast. The variety injected by college football and three professional leagues gives it the slight edge among the one-hit wonders. Also, Halloween is the most overrated holiday in the world. The one time I had fun on Halloween was because I forgot it was Halloween. And then a 7-year-old threw a pumpkin at me and I was miserable again.

November is a terrific month for college sports. The NCAA basketball scheduling wizards wisely made the first month of the season the place where we get to see amazing UNC-Kentucky–type matchups, and as college football builds to the championships and bowl games, there’s a ton of drama. Add in Thanksgiving NFL football and the NBA and NHL coming into full swing, and this is a sneaky good month. Just like the turkey is a sneaky beautiful bird — seriously, take a long hard look at it through the oven window one day. It took me two hours, but I finally saw the beauty. I cried and cried when I ate it for dinner.

Personally, I prefer the college-and-football-heavy month of November to May, but it’s hard to argue with two professional sports leagues in playoff season. Add in the fact that it’s the best month in soccer (I’m choking back my American bias, thought it might kill — AGHHAFH IT TASTES LIKE PATRIOTISM AGHAGHGH), and May is Top Six all the way.

Is there anyone on earth who doesn’t think fall is the best season? I know winter is supposed to symbolize death, but in the global warming era, summer is the new winter. There’s nothing like the anticipation of cool weather, and that end-of-misery vibe transfers to sports. In other words, September benefits from the fact that it’s not August. Here, the combination of the pennant chase, the start of both NFL and NCAA football, and the final week in Flushing Meadows is enough to make September a Top Five finisher. With the occasional Ryder Cup late in the month and soccer hitting its stride … well, as you can see, I’m trying to convince myself. I keep glancing up at May and asking myself if I’ve made a mistake. Stay strong, Shane. You’re a man now.

A great month for the Brits, with Wimbledon (best tennis major) and the British Open (second- or third-best golf major) as highlights. It’s a slow month for professional sports, but every two years, for the most part, there’s a World Cup or EuroCup final. Even a fool American like me isn’t dumb enough to underestimate the global impact there. With the Summer Classic and the Home Run Derby punctuating the month in baseball, July sneaks into the top four.

When I conceived of this post, but before I began listing the actual events, I thought April might take the top spot. The combination of the Final Four, Masters, and Opening Day all going down within a single week is pretty overwhelming. Obviously, that stretch will be no. 1 when I go all Beautiful Mind and break the sports year down by week with extensive charts and formulas. Beyond the big three, you’ve got tense action in Euro soccer and a deluge of NBA and NHL games as the playoffs approach. We couldn’t ask any more of you, April. You did your damnedest.

This is the month of my birth, and I really wanted to give it top billing. I could have too; the Capricorn month is a true stunner with a fantastic résumé, and would be an easy no. 1 on most calendars in the universe. Unfortunately, it has the bad luck to compete in the Gregorian Calendar League, where it faces a certain unyielding juggernaut:

The Stanley Cup! The NBA championship! The biggest sporting event on the planet every four years! Roland Garros and the All England Lawn Tennis Club! The maverick American golf tournament! Baseball?