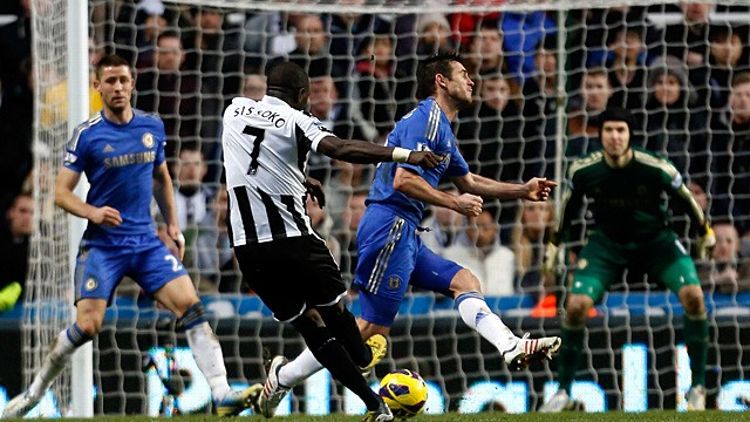 The January transfer window was sad and weird. Between Harry Redknapp and Tony Fernandes gambling the financial sustainability of Queens Park Rangers on Christopher Samba and Loic Remy saving them from relegation, to West Ham owner David Sullivan claiming to have been threatened over transfer fees, to the whole Peter Odemwingie–trying-to-force-through-his-transfer-to-QPR-by-driving-to–Loftus Road debacle — an act his West Brom manager called “total lunacy.” — it feels like things are truly falling apart. The transfer system in England is in desperate need of reform and oversight. There are too many agents, too many add-on fees. There’s too much backstabbing and backroom wheeling-and-dealing. With the exception of football’s most wealthy (Chelsea, Man United, Manchester City) or most reckless (‘Arry!), most clubs are lucky to escape the January window without losing talent or tarnishing their reputations. Rarely do they actually improve their standing.

Newcastle is the exception to the rule. Floundering, after three defeats in four games had them hovering just above the relegation zone, the Magpies — who were so impressive last season, nearly finishing in the top four — desperately needed reenforcements. So they looked to the man who has been instrumental in reshaping the club since they returned to the Premier League, chief scout Graham Carr. Carr in turn went shopping where the shopping is good: France. Pulling from the Ligue 1, where Newcastle had previously purchased midfield miracle-worker Yohan Cabaye and attacking mid Hatem Ben Arfa, the Northeast club purchased Mapou Yanga-Mbiwa, Yoan Gouffran, Massadio Haidara, Mathieu Debuchy, and Moussa Sissoko. In just two games we’ve seen something of a French revolution. Sissoko is the standout so far, scoring twice against Chelsea on Saturday (including the game-winner, above) and making one of the passes of the season against Villa last week …

If the on-field play isn’t enough for you, there’s all the fun being had off the pitch. Manager Alan Pardew — a decent-enough tactician if a seemingly lousy dinner companion — has had to bring in a translator, Jean-Paul Ndoumin, to communicate with his new Gallic recruits. This has led to some hilarity, with Ndoumin adding a little embellishment to some of Pardew’s instructions. According to the tightly wound boss: “I did actually ask the French boys if he was taking the piss at times because I saw a couple of them laughing at his translations. I don’t know if he’s expressing a bit more than what I’m saying but it seems to be working. We like him.” The French players seem to be liking it too. According to longtime Newcastle defender Steven Taylor, the players got up in front of the team when they first arrived and announced their intentions: “It was in French, but translated into English for the boys. We listened to what they had to say and that was touching for us. They said they wanted to be accepted into the team and promised they’d give 100%. That was exactly what we wanted to hear. Afterwards, some of the players got the French boys to sing in front of all of us. That got the banter going, welcome to the group. They might have been a bit embarrassed about it, but fair play to them, they got up there without arguing.” If Moussa Sissoko has seen Geordie Shore …

… then he has nothing to be embarrassed about.

And it sure wasn’t West Ham (my personal favorite) …

But it was a classic Gerrard thunder bolt just the same, and unless you support Manchester United, Everton, or DJs who refuse to carry Phil Collins 12-inches in their record crates, I don’t really understand how Steven Gerrard (pronounced GERRRAAAAAAAAAARD!!!!) 30-yard screamers aren’t your favorite thing in football.

This goal features two of my least-favorite things about football: not celebrating against your old team (come on), and one team complaining that the opposition should politely kick the ball out of play while their player writhes on the ground in faux-pain (come on!). Take both of these things and shoot them into space.

They sing songs about headers like this one. But aside from Benteke’s human battering-ram routine, I was most impressed by Matthew Lowton’s inch-perfect early cross. Villa drew 3-3 with Everton, in a match where they really needed all the points. Things look pretty bad for the Midlands team, but I can’t help but shake the feeling that if they can just tighten up their defense (they’ve let in a Premier League–worst 49 goals), they might just survive.