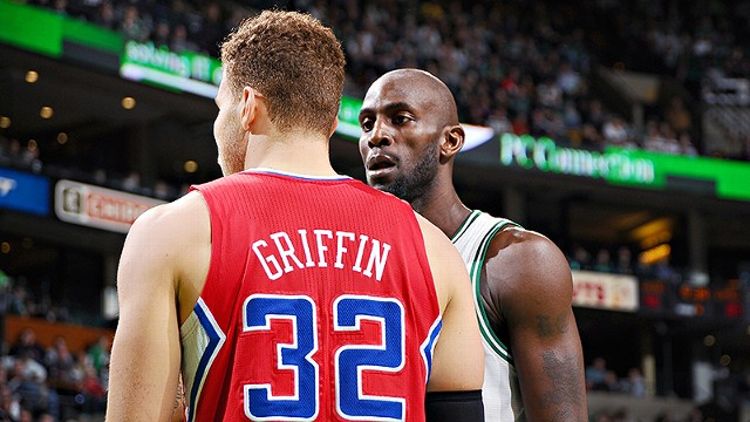 With the basketball part of my brain switched off yesterday, it wasn’t until this morning that I caught the Sporting News report that the Los Angeles Clippers were interested in a trade for Kevin Garnett. The initial reaction, as someone who works 50 yards from Staples Center and has long held a fascination with KG, was, of course, “OH MY GOD, DO THAT.” With some time to consider it, the basketball fan in me has pretty much come to agree.

The report claims that talks had already taken place between the teams, which ESPN’s Chris Broussard has reported is not the case. Supposedly, there are those with the Clippers who are worried about the two remaining years on KG’s deal after this season ends.

That seems like a legitimate concern. By the time this contract runs out, Garnett will be 39 years old, and it’s fair to say that this season has been his worst in the past 15 years. With Chris Paul’s new contract on the horizon and Blake Griffin’s kicking in next season, adding more than $11.5 million of Kevin Garnett in 2014 comes with its risks.

Another issue some might have is what the trade would do to a Clippers rotation that took some figuring out. The deal would reportedly involve Eric Bledsoe and Caron Butler. Butler’s departure would likely mean Matt Barnes sliding in as a starter, and Garnett’s arrival would push DeAndre Jordan to the bench. With both Bledsoe and Barnes gone, a second unit that’s been very effective (a +11.3 net rating as the team’s second-most-used starting five) would be gone, and Vinny Del Negro would be left to learn how best to dole out his minutes 50 games into the season.

The counter to those concerns is a scientific one: Who the hell cares? The Clippers’ biggest roadblock to a title continues to be their problems defensively, and specifically defending the rim. Of the team’s 20 most frequent two-man pairings, only one has a worse defensive rating than DeAndre Jordan and Blake Griffin’s 103.2. Compare that to Garnett, who comes in safely under 100 when paired with any Celtic. Even at age 36, and even as his other skills have faded, Garnett remains one of the best defenders in the game. Adding him isn’t just an upgrade over Jordan, but a move that changes how entire lineups will look on that end of the floor. Garnett has a no-trade clause, but I’m not sure there’s any situation in the league he’d rather be in. A move to Southern California, where Garnett reportedly spends his offseasons, would likely be his last chance at another championship.

Bledsoe’s season has made the thought of losing him a difficult one, but it’s also made this sort of deal a possibility. The notion that the team had to get something for Bledsoe always seemed misguided. Trading a 23-year-old specimen to get a veteran who stood as only a marginal upgrade would be foolish. Garnett is not that. Bledsoe may not be the exact type of player Boston needs in Rajon Rondo’s absence (his struggles in place in Chris Paul have shown how far away he is from that role), but he’s the type of player that would at least make Danny Ainge have to listen.

For the Clippers, it’s about deciding whether this is a team that’s ready to win right now. With Garnett, it can safely be argued that it would be. I’m not sure there’s a team in the West that wants to play a seven-game series against Chris Paul and Kevin Garnett — and they shouldn’t. The notion of locking up Paul long-term may have the Clippers thinking that this season is just the first in a long line of runs near the top, but those sorts of assumed windows rarely work out. If Garnett actually is available, L.A. has an obligation to figure out what it would take to get him here.