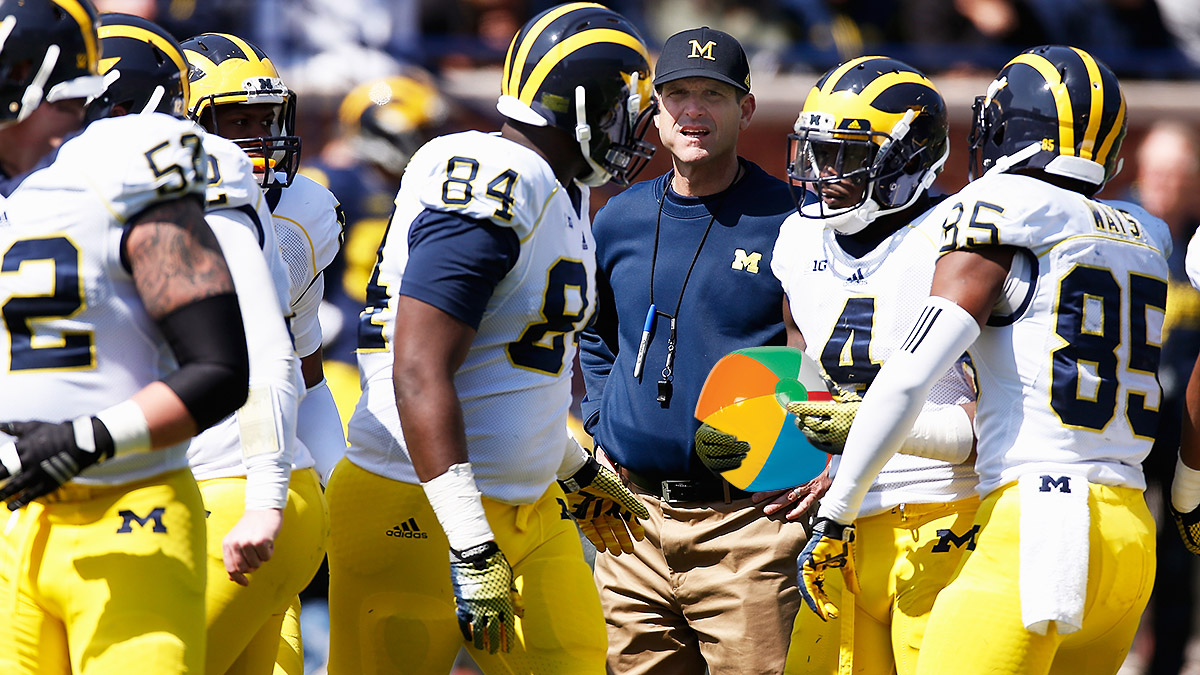 With a veritable smorgasbord of spring games on tap this weekend, you’d think college football fans would be brushing up on the local two-deep in preparation for a Saturday of day drinking and channel-surfing. Alas, in most cases you’d be very, very wrong.

While plenty of offseason pigskin devotees attend these glorified practices and sanctioned excuses for offseason tailgates, nobody really seems to watch them, and with good reason: Spring games are pretty boring! This is unfortunate, because outside of last year’s unforgettable Virginia Tech–Wake Forest tilt, whose dullness was itself a kind of performance art, college football should never, ever be boring.

With that in mind, here are 10 easy ways to drastically improve the entertainment value of spring games.

1. Embrace College’s SPRING BREAK!!! Ethos by Playing the Game on a Beach

At the very least, this would be a savvy recruiting tactic. It’s a wonder that some enterprising Group of Five school hasn’t done it already — or that Alabama hasn’t, for that matter. Can’t you picture Nick Saban calling plays in a Speedo? The future is a beautiful place.

2. Let the Head Coaches Suit Up and Play

Despite drawing more hype than nearly every regular-season game in the Brady Hoke era, Michigan’s first spring contest under Jim Harbaugh proved to be like most spring games: a total, unrelenting snoozefest. What would have been more exciting than watching Team Blue beat Team Maize 7-0? Well, besides “literally anything,” I’d have to say it would be watching Team Blue beat Team Maize with Harbaugh at quarterback. Sure, it wouldn’t have helped solved the Wolverines’ quarterback dilemma, but who cares? America needs to know if the 51-year-old Harbaugh can still sling it like Uncle Rico. (SPOILER ALERT: He can.)

While we’re at it, let’s plug in Bret Bielema at offensive tackle, Bill Snyder at kicker, and Les Miles at wideout in their respective spring games, all of which would instantly qualify as must-see TV.

3. Scrimmage a Conference Rival Instead of Hosting an Intrasquad Practice

This one seems obvious enough. The winner could even earn home-field advantage in the regular season. Bud Selig would certainly approve!

4. Have Players Dress Up As Their School’s Mascot Instead of Wearing Traditional Football Uniforms

In addition to looking cool, this would lend an air of anonymity to the game, granting obscure players a rare chance to shine. Of course, fans would just assume that big-name guys made all the good plays anyway, but them’s the breaks. The important thing here is that we’d see an uptick in MASCOT FIGHTS, and for that we would all be thankful.

If versatility is so crucial in football, then why hasn’t anyone tried this revolutionary approach to spring ball yet? For all we know, there could be a Myles Jack, brimming with untapped potential, on every roster in the country. Additionally, this setup should lead to a lot of scoring, and lord knows we don’t need any more 7-0 spring games.

6. In the Event of a Quarterback Battle, Scrap the Spring-Game Concept Altogether and Host a Challenge-esque Competition Between Those Vying for the Job

In fact, I’m mildly shocked the Big Ten Network hasn’t done this already with Ohio State. I know Braxton Miller and J.T. Barrett are still recovering from injuries, but that would only heighten the good drama! Miller could attempt to use his left arm for everything, Barrett could travel around in his tricked-out knee scooter, and Cardale Jones could wear a blindfold to level the playing field. No one in his or her right mind would prefer viewing a traditional spring game to this.

7. Play the Game in the Wee Hours of the Morning

We could call it “Midnight Madness,” which is definitely something I just thought of and not something I stole from the world of college basketball. At a minimum, the first school to do this will reap the benefits of a stronger fan base in Alaska and Hawaii.

8. Make the Game a 24-Hour Test of Endurance

Don’t worry, bathroom breaks would be allowed, if somewhat discouraged. The game itself would feature a massive countdown clock and include endless substitutions, and whichever team was leading when the clock struck zero would be declared the winner.

9. Play a Sport OTHER Than Football

I can’t be the only one who’d pay an exorbitant amount of money to watch linemen fence each other, can I? The more I think about it, the more it seems clear that DirecTV needs a channel devoted specifically to that and that alone. My wish list also includes Oregon performing a synchronized-swimming routine and Michigan State putting on a rowing exhibition, because I am a man of varied tastes.

10. If the Teams Insist on Playing Football, Incentivize Big Plays by Making 50-Plus-Yard Touchdowns Worth 10 Points

And in general, experiment with the rules of the game until the desired outcome of an exciting spring contest is achieved. Then cry yourself to sleep knowing that no matter how thrilling this new-look spring football experiment proved to be, you won’t see your team in action for another five months.